If you’ve ever toured a cave, you’re likely familiar with stalactites, stalagmites, columns, soda straws, and flowstone. Maybe even draperies and cave bacon. But have you ever heard of a calcite flower? Or seen a pool of water so reflective that you mistake the reflection for a deep recess of the cave? Every cave offers something special. A calcite flower and the reflective water are just two unique attributes  in southern Indiana’s Marengo Cave, arguably the most decorated cave in the Interior Lowlands of the United States.

There is no indication that humans were ever in Marengo Cave before 15-year-old Blanche Hiestand and her 11-year-old brother Orris discovered it in 1883. Blanche was working as a cook at a nearby boarding school when she overheard students talking about an opening some boys found at the base of a sinkhole not far from the school. That afternoon she went home, grabbed Orris and a couple of candles, and the pair went off in search of the opening. They found it, sure enough. They crawled through the opening and down a muddy, slippery sloping rock until they came to level ground. The room they were in was huge! By the dim candlight, they saw what they thought were diamonds glistening in a huge rock mound.

The cave and the land above it changed hands a few times over the years. There was a land dispute, fencing off part of the cave for fifty years. Business had its ups and downs, but the tours continued, even through the Great Depression. Many improvements were made through the years, including adding electric lighting, a new entrance and safer, easier-to-navigate walking paths. In 1984 Marengo Cave was designated a U.S. National Natural Landmark.

The Crystal Palace tour starts from the gift shop where you descend 22 steps. 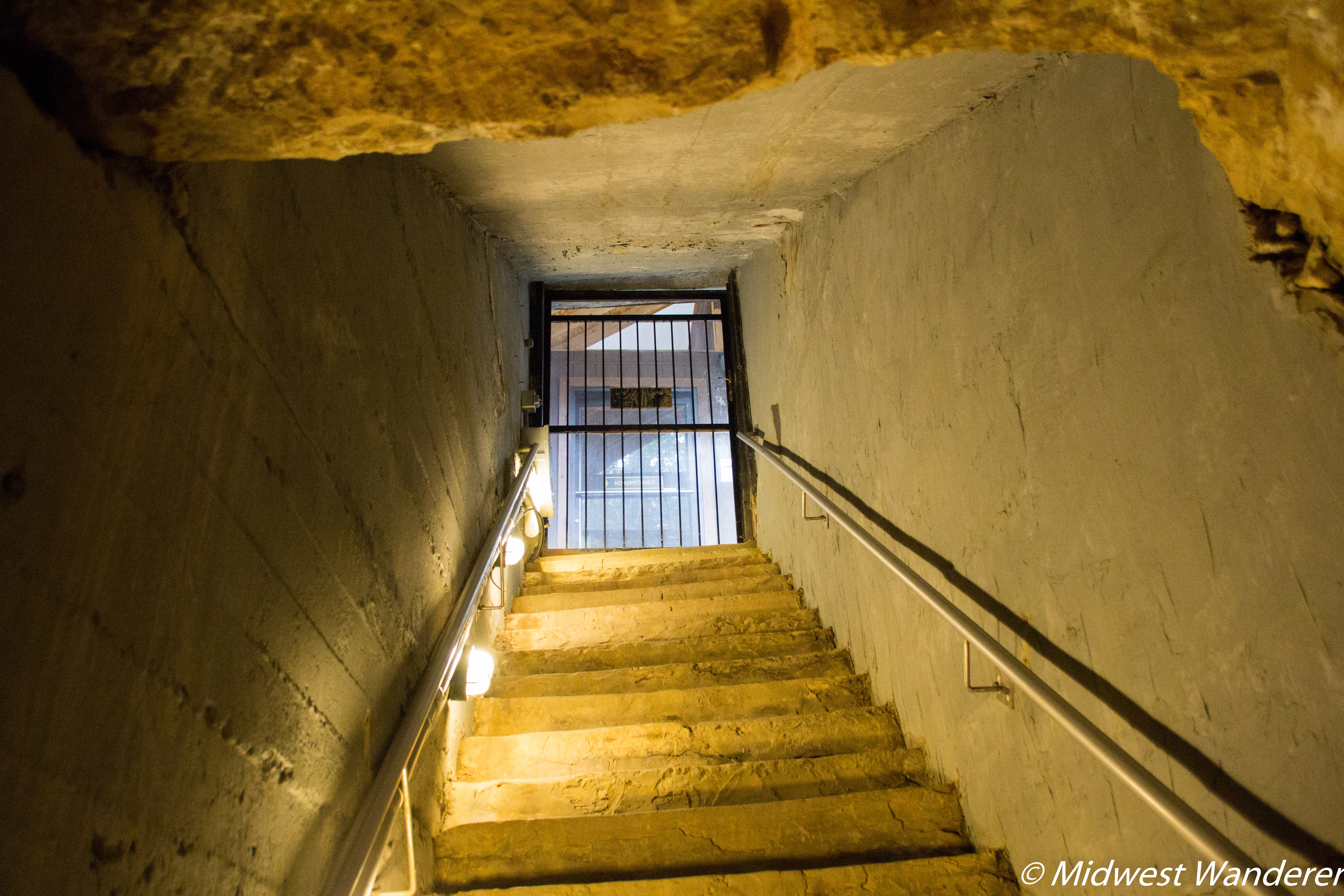 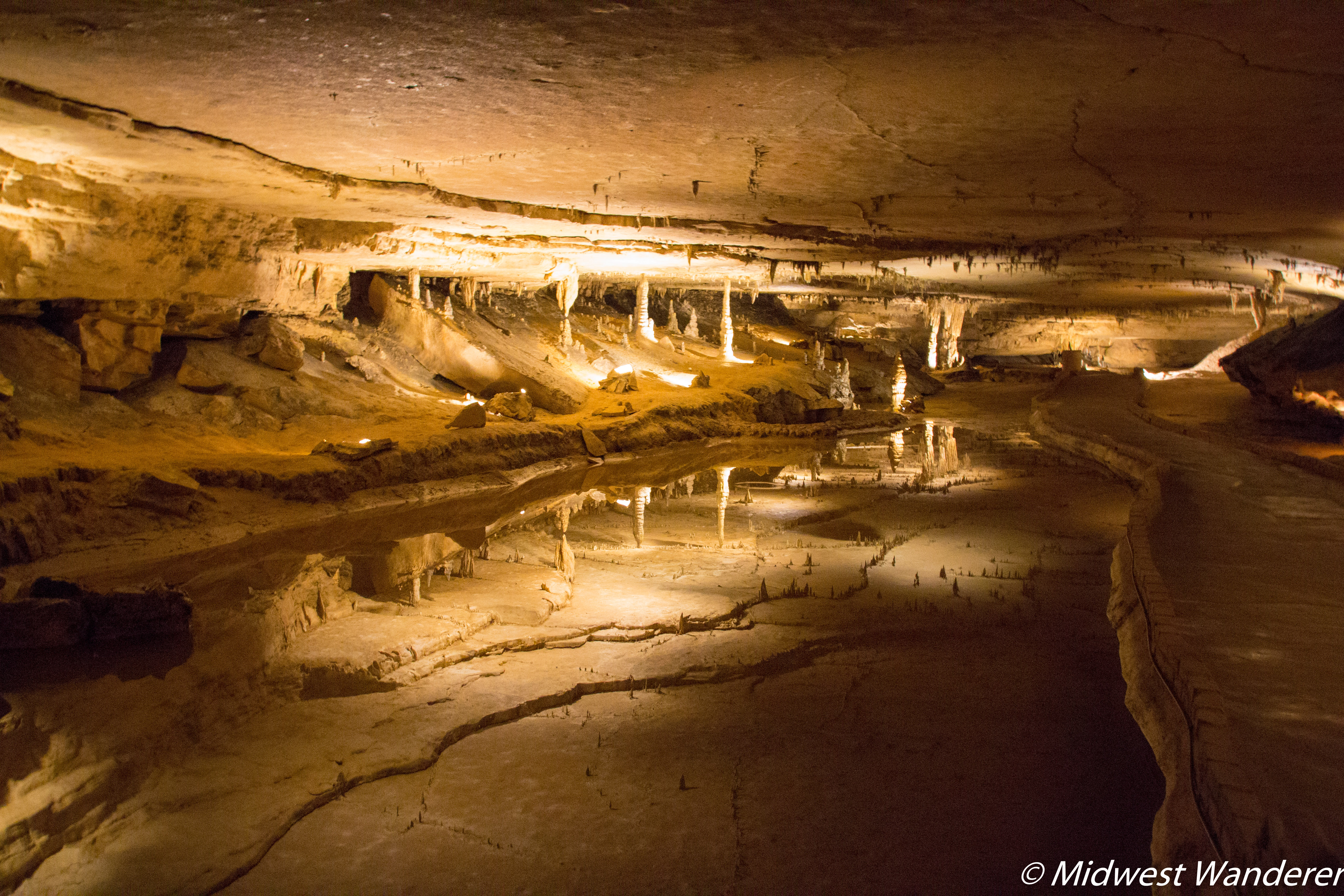 Dani pointed out what the staff at Marengo Cave call the “tom-tom,” a good example of how a cave is formed. Water that once rushed through the cave ate away the soft parts, leaving the hard parts behind. In this case, the tom-tom was left jutting out away from the cave wall. Dani banged the tom-tom with a rubber mallet, demonstrating both how hard the limestone is, as well as the echo it creates. She said that if you strike it hard enough, you can hear the echo a half mile into the other side of the cave. She pointed out that they have never broken a piece of the limestone off. However, they have broken some mallets.

When we got to the natural entrance of the cave, we watched a short presentation about the day that Blanche and Orris discovered it. The presentation was projected onto the rock that the children navigated as they entered the cave. 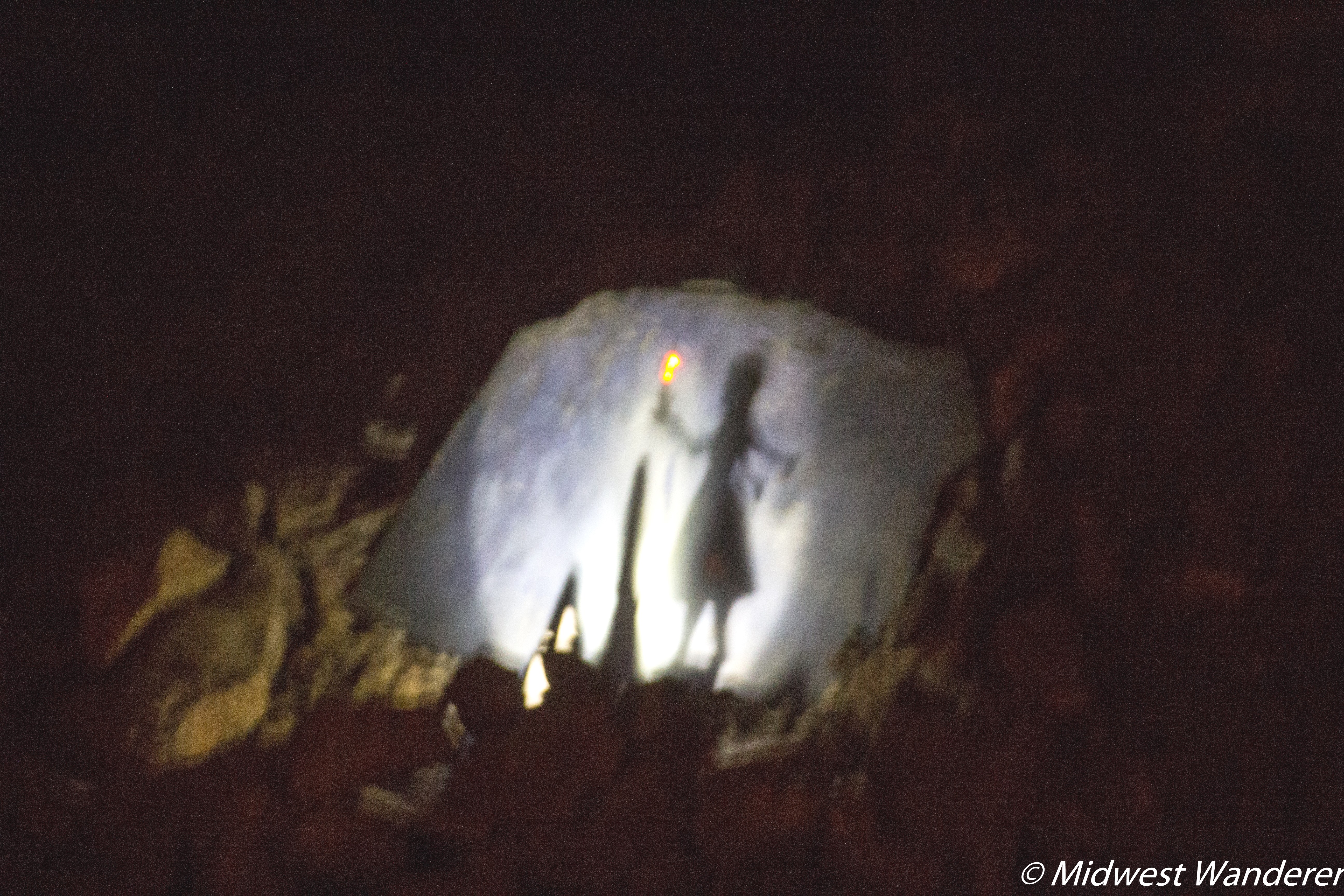 The natural entrance is now sealed off, but when Samuel Stewart first started giving tours, visitors walked down 156 steps from the opening to the cave floor.

Just a few steps from there, we saw the “diamonds” that Blanche thought she saw. The photo below doesn’t do justice to the real thing, which is covered in sparkles. Of course, they’re not diamonds. It’s crystalized calcite. 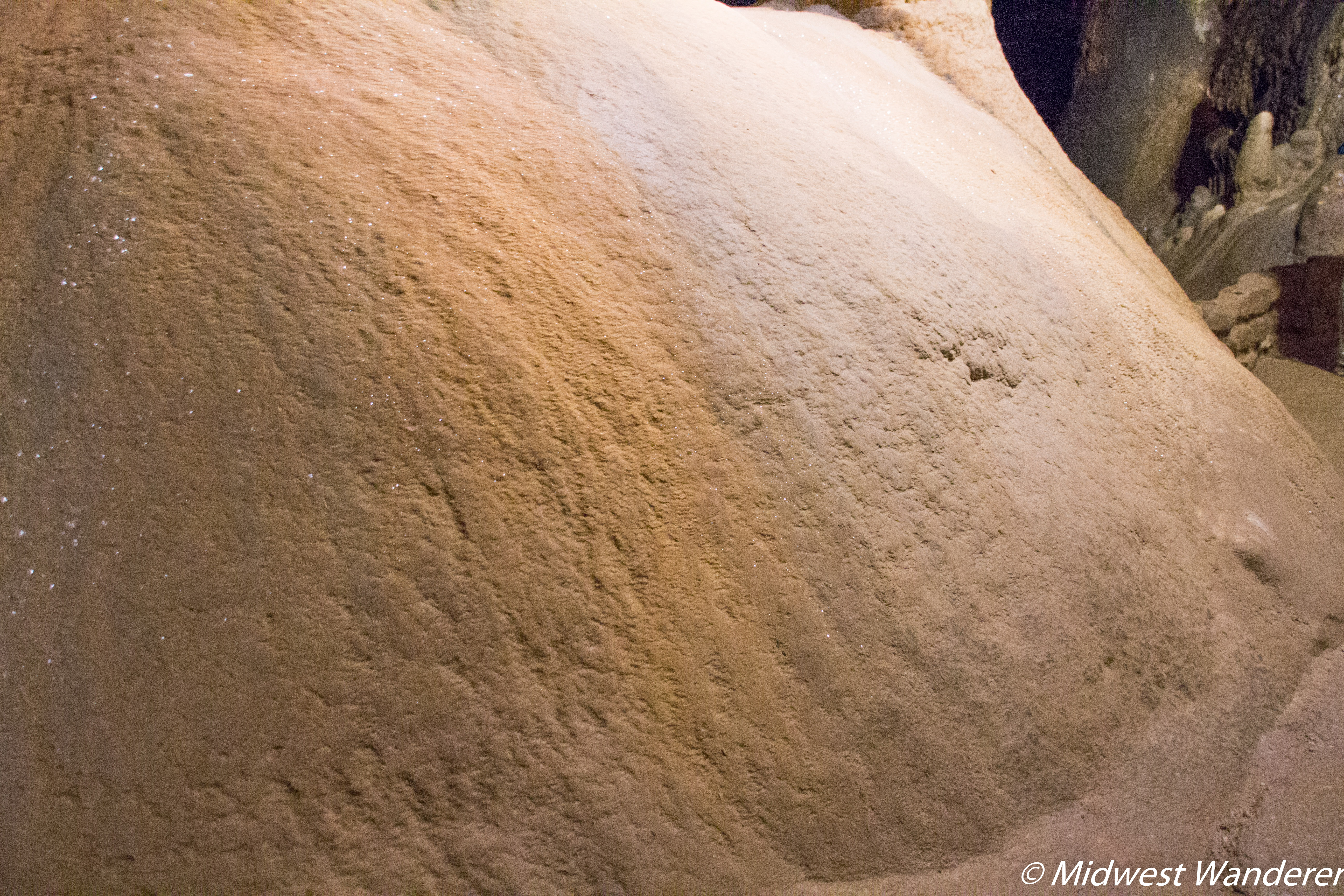 We continued through the Queen’s Palace and Pillared Palace, both packed with formations and flowstone. 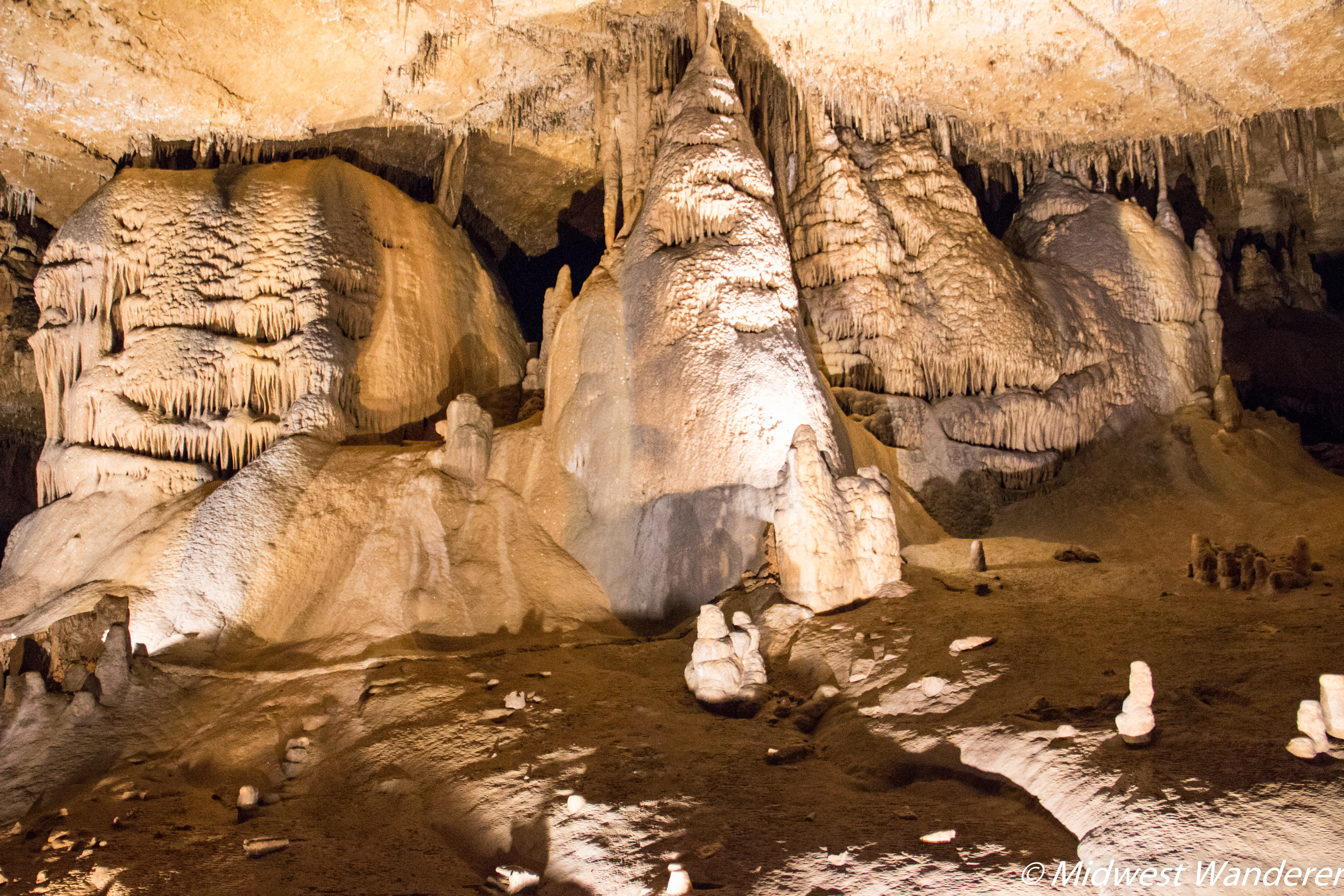 Dani pointed out an area where you can feel wind blowing. She said this is an indication of a crawlway, a passage to another room in the cave. Blue lights in Marengo Cave indicate crawlways. 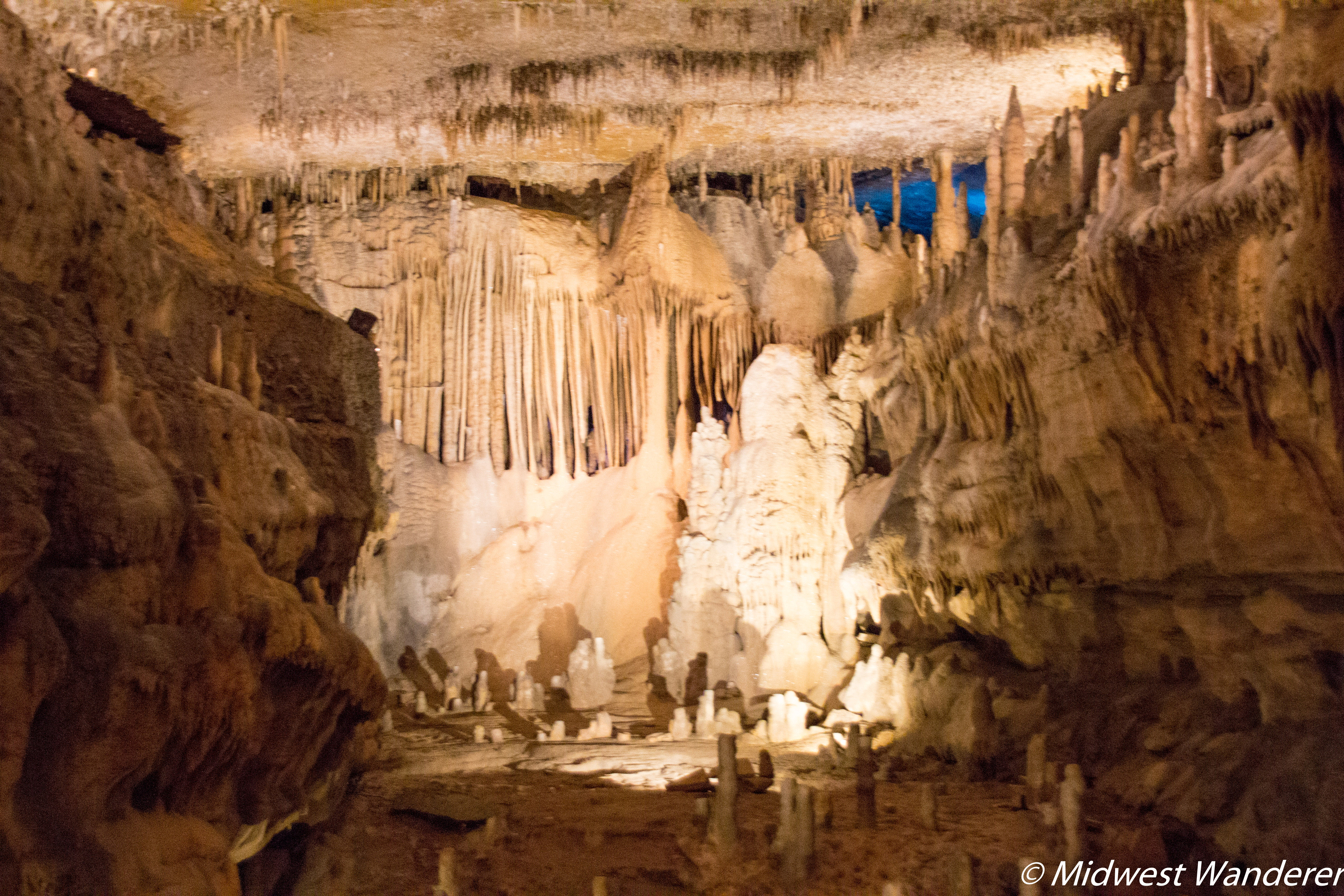 Before we left, Dani took my husband and me to the Dripstone Trail to show us the rare calcite flower. “You can visit tons of caves and not ever see one,” she told us. She explained that calcite usually crystalizes in a dry period, but this one crystalized underneath gallons of water. 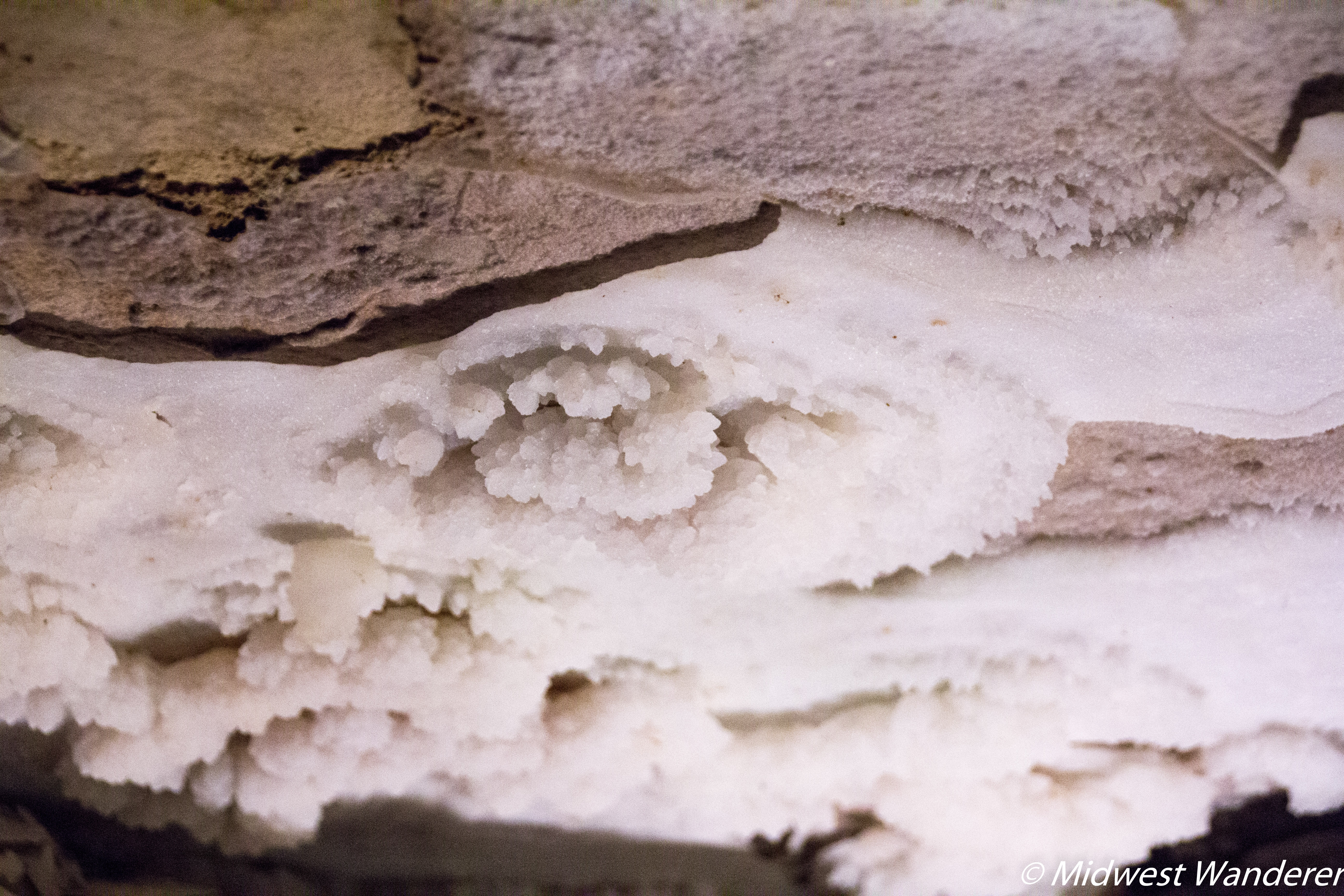 Dani then led us to Music Hall, where an annual square dance used to be held. In 2015, Marengo Cave hosted a community Christmas sing-along in Music Hall and will hold the event again in 2016.

Although most areas in the cave are hands-off (oils from hands stop cave growth), one place is set aside for hands-on fun. The mud ceiling in one section of the Dripstone Trail is embedded with coins, and more coins litter the ground. Visitors are actually encouraged to throw coins up to see if they stick. I picked up a penny and tossed it up. No luck. I then picked up a quarter, which is heavier. It stuck for several seconds before it fell back down.

Have you ever wanted to get a taste of real cave exploration, or spelunking? Besides the regular tours, Marengo Cave also offers a Natural Adventure Trip. You wade through an underground stream, and crawl through passage ways. Sounds like fun. Maybe someday…

If you visit Marengo Cave

Accommodations: We stayed at the Kintner House Inn bed and breakfast during our visit to Historic Corydon and Harrison County.  Find the best deal, compare prices, and read what other travelers have to say at TripAdvisor. 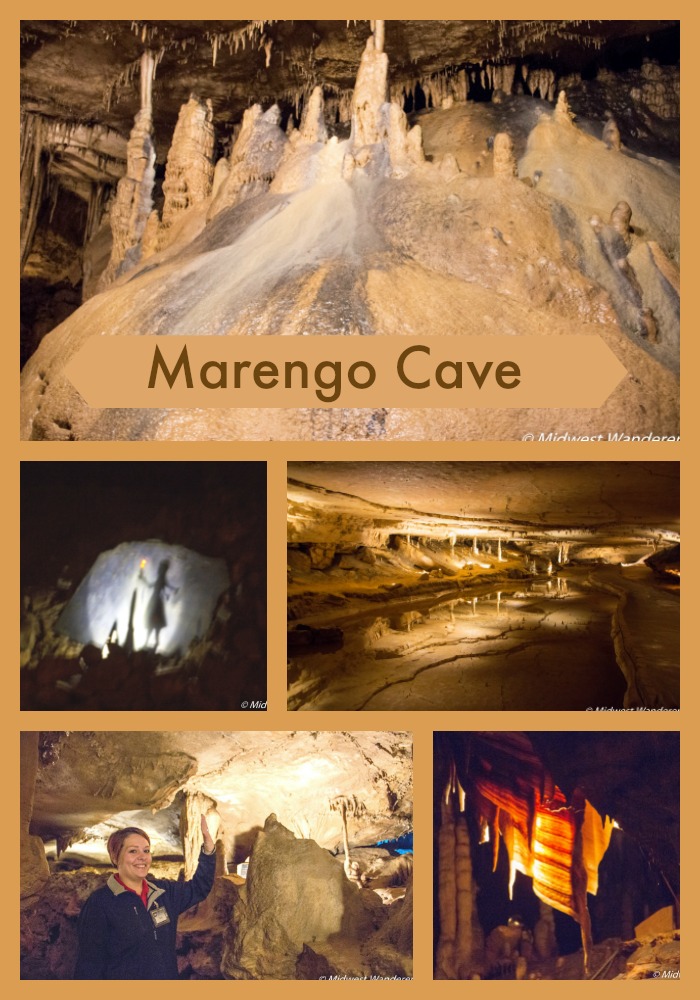 Disclosures: This leg of our road trip along the Ohio River Scenic Byway was hosted by the Harrison County Convention and Visitors Bureau. Our admission to Marengo Cave was complimentary. However, any opinions expressed in this article are my own.
This article contains an affiliate link, which means if you book a room through the TripAdvisor link above, I will receive a small commission at no additional cost to you.

Before this summer, I knew little about Wild Bill Hickok. Then, within just a few weeks, we visited three places within Kansas and Illinois that all shared Hickok stories—quite a coincidence. I learned several fascinating facts about him. Here are END_OF_DOCUMENT_TOKEN_TO_BE_REPLACED