Our first stop was the fair headquarters at the Parke County 4-H Fairgrounds for a pancake breakfast. After our two-hour drive, we were more than ready for a meal. Several Parke County not-for-profit organizations sponsor the breakfast together. For only $6 they serve three big pancakes with real maple syrup, two pork sausage patties and a beverage (coffee, milk or orange juice). Pancakes are all-you-can-eat, so in the unlikely chance you are still hungry, you can ask for more pancakes. 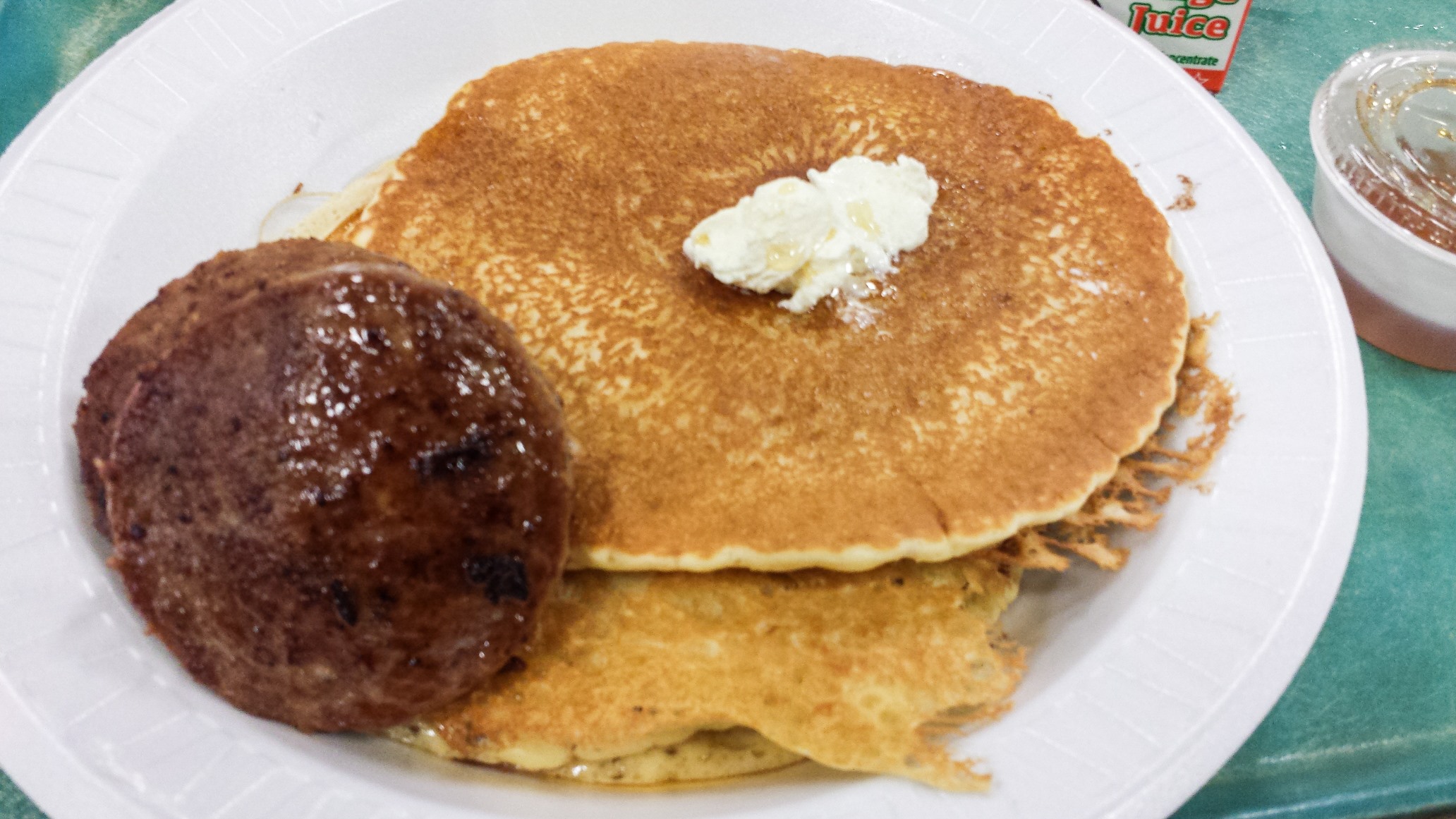 After breakfast we browsed the Maple Syrup Fair vendor booths. Local artists and artisans display paintings and crafts. Others vendors sell baked goods, jams and jellies, and of course, maple syrup companies sell syrup. We picked up a gallon of maple syrup. At home we use only real maple syrup, and from past experience we know a gallon will last us an entire year. 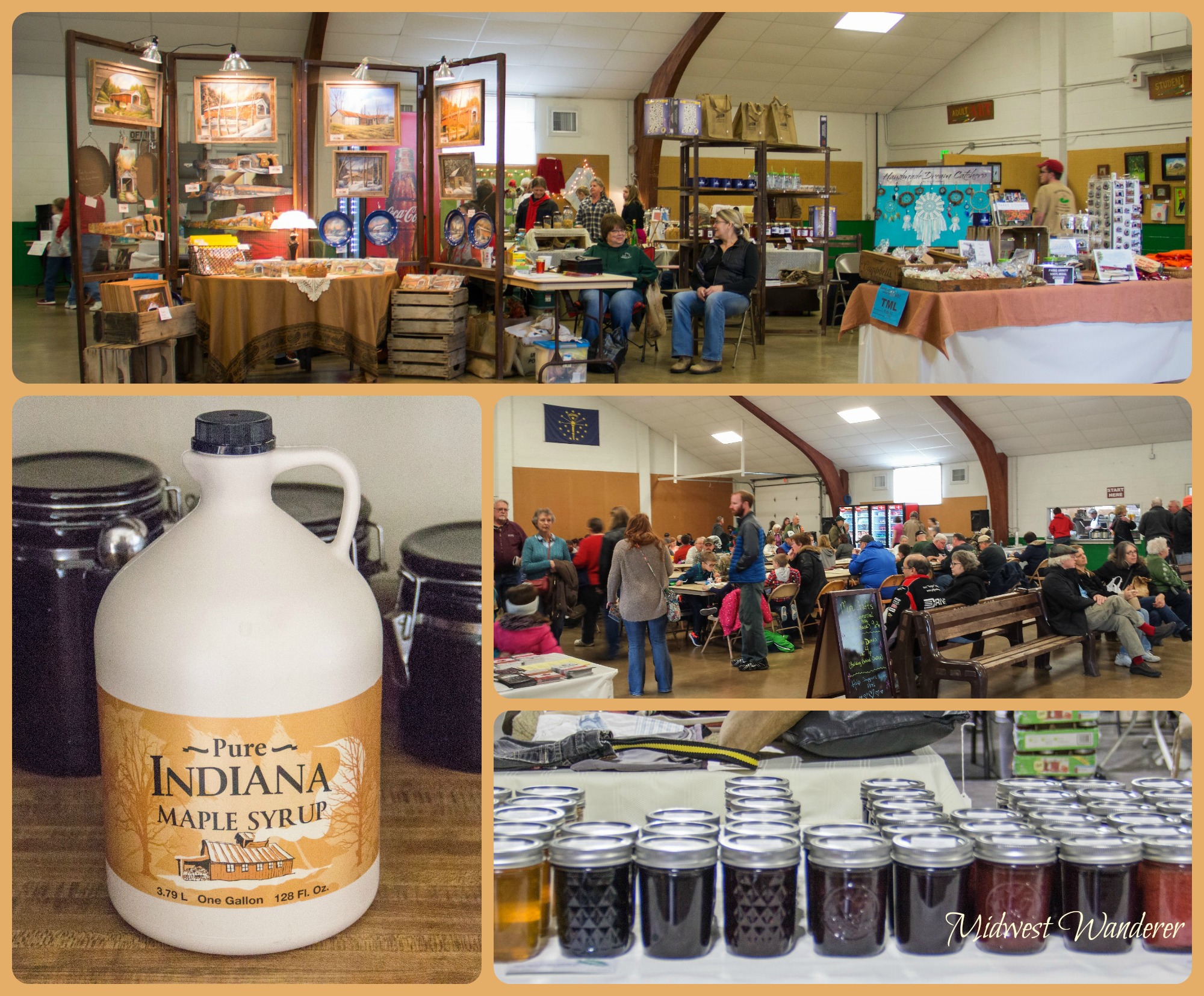 We were disappointed that only two of the four maple syrup camps were open, and none were processing syrup. However, we discovered why when we chatted with David Wirth at the Williams & Teague maple syrup camp.

The unusual early February weather warm up that most of us in the Midwest enjoyed wasn’t good for maple syrup production. The trees have started budding. David told us that once the trees begin to bud, the syrup becomes milky and has an off-taste. He isn’t sure yet how badly the weather conditions will affect the Midwest syrup production this year. However, he isn’t optimistic.

David mentioned that a neighboring maple syrup camp uses a newer vacuum system to extract sap from the trees, rather than customary gravity drip method. They began extracting sap from the trees immediately following a hard January freeze. So they had some production but not nearly as much as usual.

How maple syrup is made

Although Williams & Teague wasn’t processing syrup, David explained the cooking process. Sap starts running in the maple trees when nights are cold and days are above freezing in early spring. Sap drips from taps inserted into the trees. The sap is transported into a storage tank and then pumped into an evaporator where it boils. As the sap boils, water evaporates, and the sap becomes thicker and sweeter. It boils until it reaches maple syrup density. David explained that early in the maple syrup season, the sap contains more sugar. Even so, it takes about 40 gallons of early sap to make one gallon of syrup. Later in the season, when sap contains  less sugar, it can take up to 60 gallons of sap to produce one gallon of syrup.

Although Williams & Teague wasn’t tapping the maple trees, they had plastic tubing in place for the process. When you think of collecting sap, you may picture sap dripping into a bucket. However, plastic tubing running from taps into a collection tank saves time and labor. When you’re tapping 700 trees like Williams & Teague—or more—it makes sense to implement time and cost savings measures. 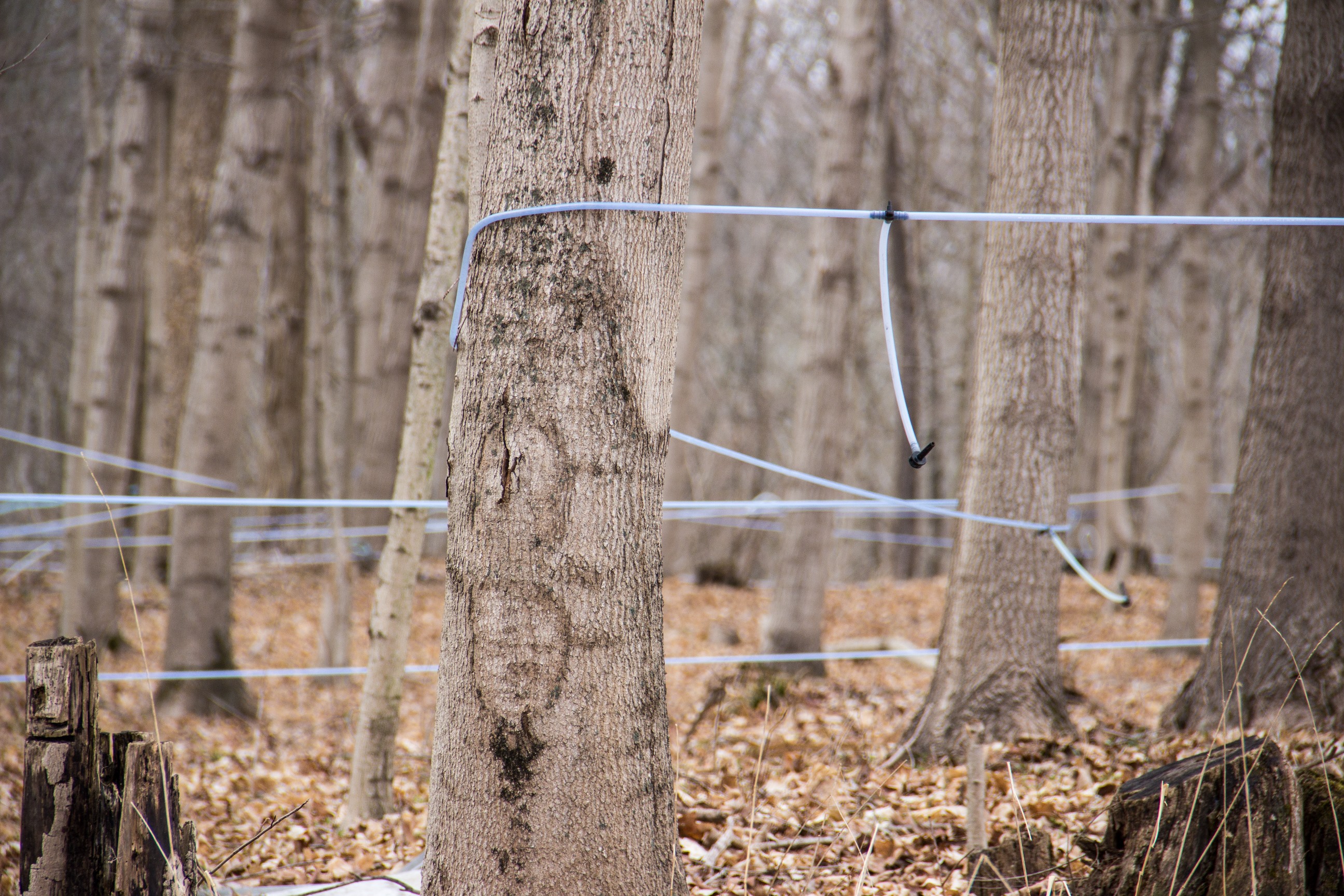 Since the maple syrup camps weren’t collecting and cooking syrup during our visit, we spent the rest of the day on covered bridge routes. Parke County has laid out five color-coded travel routes. Each route covers from 24 to 33 miles. The combined routes incorporate most of the county’s 31 covered bridges.

During the fall Covered Bridge Festival, the route roads become one-way to control the continuous flow of traffic. However, while we were touring this past weekend, the roads were quiet. We traversed routes in both directions and easily reached a handful of bridges not directly on designated routes.

It’s also much easier to photograph the bridges outside of Covered Bridge Festival time. During the festival, everybody is taking pictures of the bridges. It’s nearly impossible to snap a photo that doesn’t include other people or parked cars. 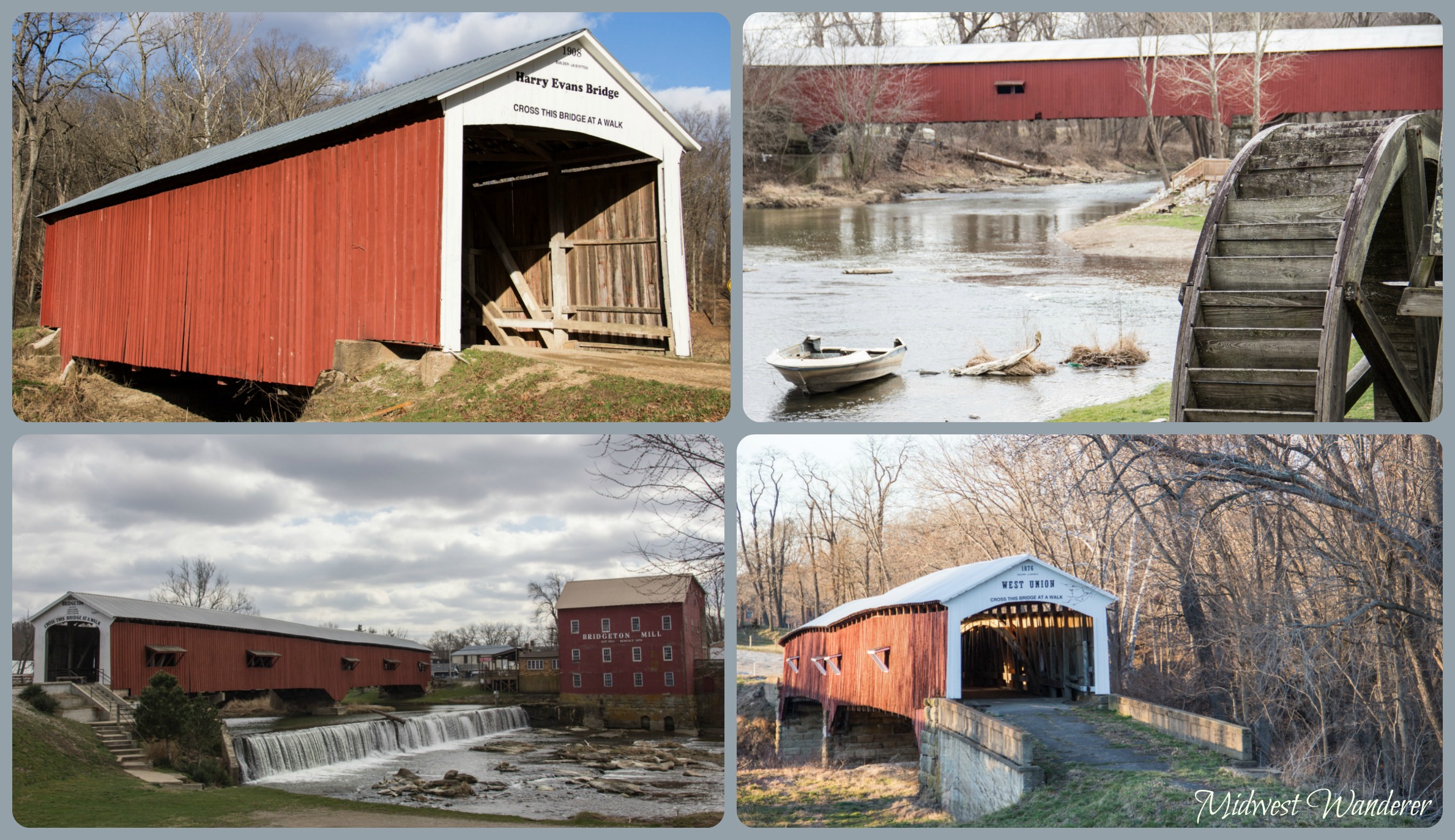 If you go to the Parke County Maple Syrup Fair

The Parke County Maple Syrup Fair runs the last weekend in February and the first weekend in March. The 4-H Fairground is located one mile north of Rockville, Indiana, on U.S. Highway 41 (just north of U.S. 36). The fair runs from 8 a.m. to 4 p.m. Pancakes are served all day. Visit the web site for further details.

Although it’s easier to photograph Parke County covered bridges outside of the festival time, the Covered Bridge Festival is well worth attending. The festival is more than about the bridges. You’ll find activities, entertainment, crafters, vendors and food in towns all along the five color-coded bridge routes. The festival, headquartered in Rockville, Indiana, starts the second Friday of October and runs for ten consecutive days. Check details on the Covered Bridge Festival web site.

Accommodations: Check accommodation rates in and around Rockville, Indiana. 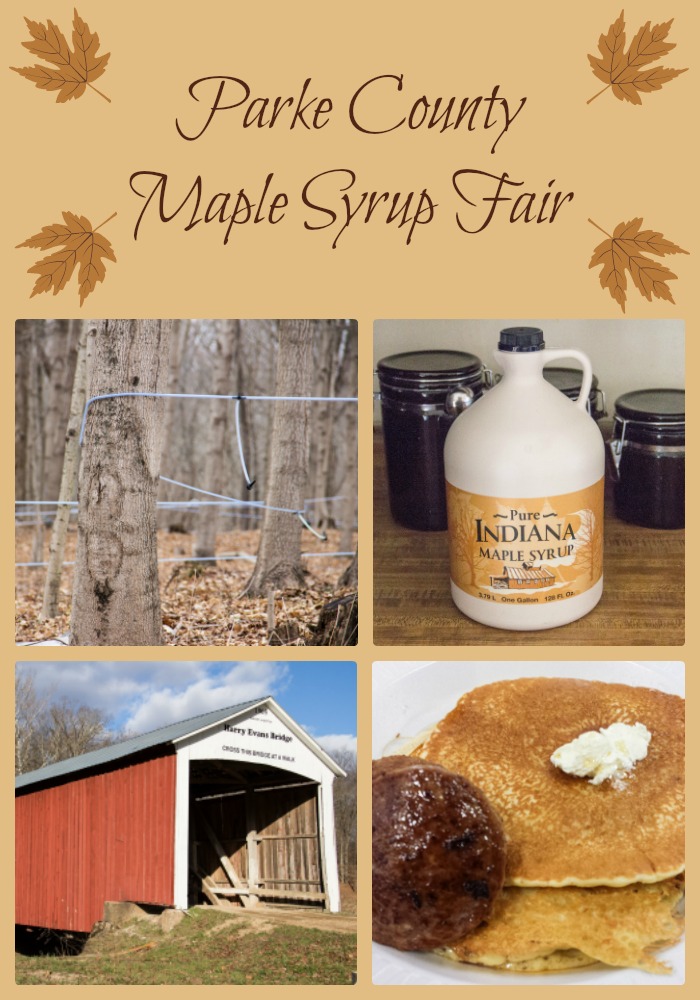 Disclosure: This article contains an affiliate link. If you book a room through the “accommodations” link above, I will receive a small commission, at no additional cost to you.

Before this summer, I knew little about Wild Bill Hickok. Then, within just a few weeks, we visited three places within Kansas and Illinois that all shared Hickok stories—quite a coincidence. I learned several fascinating facts about him. Here are END_OF_DOCUMENT_TOKEN_TO_BE_REPLACED