The Bavarian architecture couldn’t be better suited for a cheese shop owned by a Swiss immigrant, nor could the setting be better located, adjacent to the Emmi Roth USA cheese factory. In fact, visitors can walk down the hall in the Monroe, Wisconsin, Alp and Dell Cheese Store and see some of the very products sold in the shop being made. 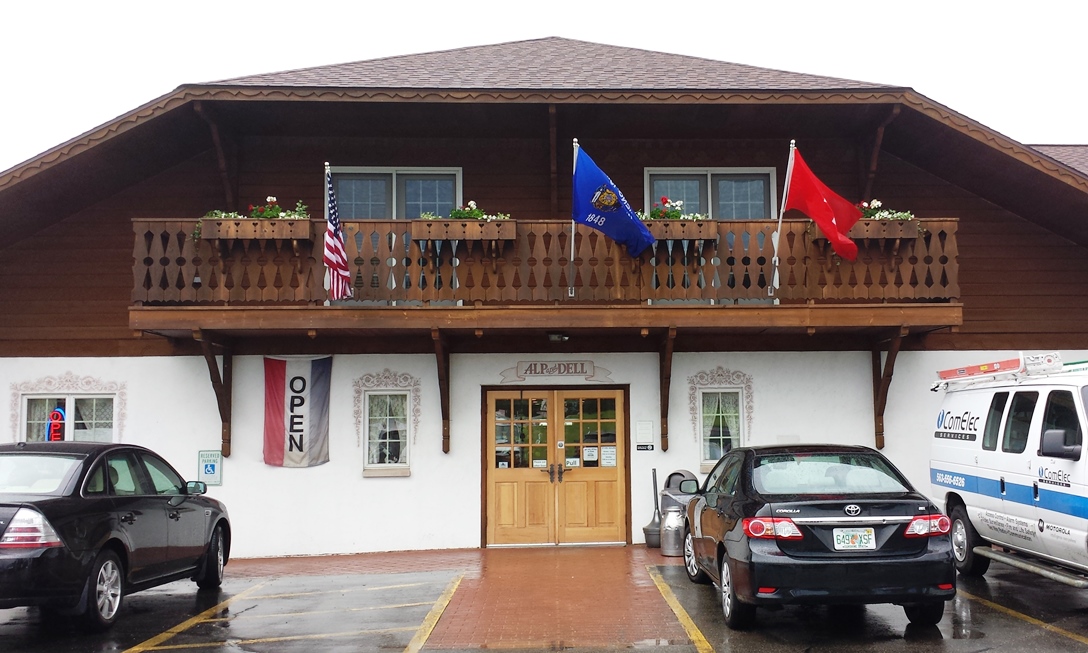 Cheese store proprietor, Tony Zgraggen, knows his cheese. For five years after he and his wife, Esther, immigrated to the United States from Switzerland in the 1980s, they had a dairy farm and sold cheese at the Madison farmer’s market. Today Tony sells over 100 kinds of cheese at the Alp and Dell Cheese Store in the building he leases from Emmi Roth. About half the cheese stock at Alp and Dell is from Emmi Roth, but other locally made cheese, and some imported from Europe is available, too.

Many of the cheeses are available to sample.

After showing me around the store, Tony escorted me to the Emmi Roth viewing area to watch and explain the cheese making process. He also provided a bit of the history of Emmi Roth. The Roth family began making artisjnal cheeses in Switzerland in 1863. The son of the first cheesemaker moved to New York in 1911 and sold cheese imported from Europe. Nearly 80 years later, in 1990, Roth Kase purchased a former Little Caesars mozzarella plant in Monroe, Wisconsin, and started making European style cheeses. In 2010 Roth Kase merged with Emmi AG to form Emmi Roth. The company that began with a handful of employees has grown to 350 employees and now produces 38,000 pounds of cheese per day, around 18 different types.

The milk for the all-natural cheese comes from area milk co-ops. All dairy farms are required to sign a document saying they don’t inject their cattle with growth hormones. The cows are grass fed in the summer, and the winter diet is alfalfa. After pasteurization, enzymes are added to the milk. The enzymes are the DNA that determines what kind of cheese will be produced. Curds (solids) separate from the whey (liquid). They whey is sold off for other purposes, and the curds become the cheese. Hard cheeses are formed in molds and are turned every 20 to 30 minutes for three to four hours.

When ready, the cheese loaves are places onto shelving units and moved via elevator to the lower level salt brine vats. The amount of time spent in the brine depends on the cheese. Low-fat, low-sodium cheese stays in the vat about two hours, whereas an Alpine cheese stays in the vat for 28 hours. The brine forms a shine, pulls more moisture out, adds flavor and acts as a preservative.

After the brine process, the cheese is moved to the aging cellar where again the length of time for the process depends on the type of cheese. Some of the cheeses are aged on spruce boards. The wooden boards have the right properties to release air and moisture, and they help to develop the taste.

I noticed what seemed like a soapy liquid on the floors in the brining/aging area. Tony explained that it is a sanitizer that employees walk through or carts are wheeled through when moving from area to area to avoid cross contamination.

Following the aging process, the cheese is packaged, labeled and prepared for shipping.

During the cheesemaking process, samples are constantly being tested. Every batch gets recorded with the date and the amount produced in the batch. In the unusual event of a recall, they can find out within three hours which farm the affected milk came from.

Wisconsin is a natural cheesemaking state, with mineral rich soil and clean water from the Great Lakes. Between the ideal conditions for cheesemaking and the Swiss heritage of the area, it’s not surprising that there are a dozen cheese plants in Green County, where Emmi Roth is located. The county also has the highest concentration of master cheesemakers in the country.

Following my tour, I spent a little while longer in the Alp and Dell Cheese shop, tasting samples and deciding on my purchases. I ended up with a brick caraway, melt-in-your-mouth butterkase, and smoky cheddar. I enjoyed the brick caraway on crackers, the smoky cheddar on burgers and in mac ‘n cheese. I haven’t started on the butterkase yet, but I’m sure it will be delicious both as-is and in recipes.

The Alp and Dell Cheese Store and Emmi Roth USA viewing hall are located at 657 2nd Street in Monroe, Wisconsin. Guided tours are offered Monday through Friday at 10 a.m. and on Saturday at 11 a.m.

Disclosure: My visit to Monroe, Wisconsin, was hosted by the Green County Tourism, but any opinions expressed in this post are my own.

Howard Steamboat Museum in Jeffersonville, Indiana, pays tribute to the Howard family and their steamboat building company. The tour combines a history of the ornate Edmonds and Laura Howard mansion and the shipyard located across the street, which the Howard END_OF_DOCUMENT_TOKEN_TO_BE_REPLACED