Who takes over two years to build a mansion, lives in it for fewer than five years and then leaves town? Monroe Seiberling did. We visited the Seiberling Mansion in Kokomo, Indiana, which now serves as the Howard County Historical Museum, and learned the fascinating stories of the home and those who lived there. 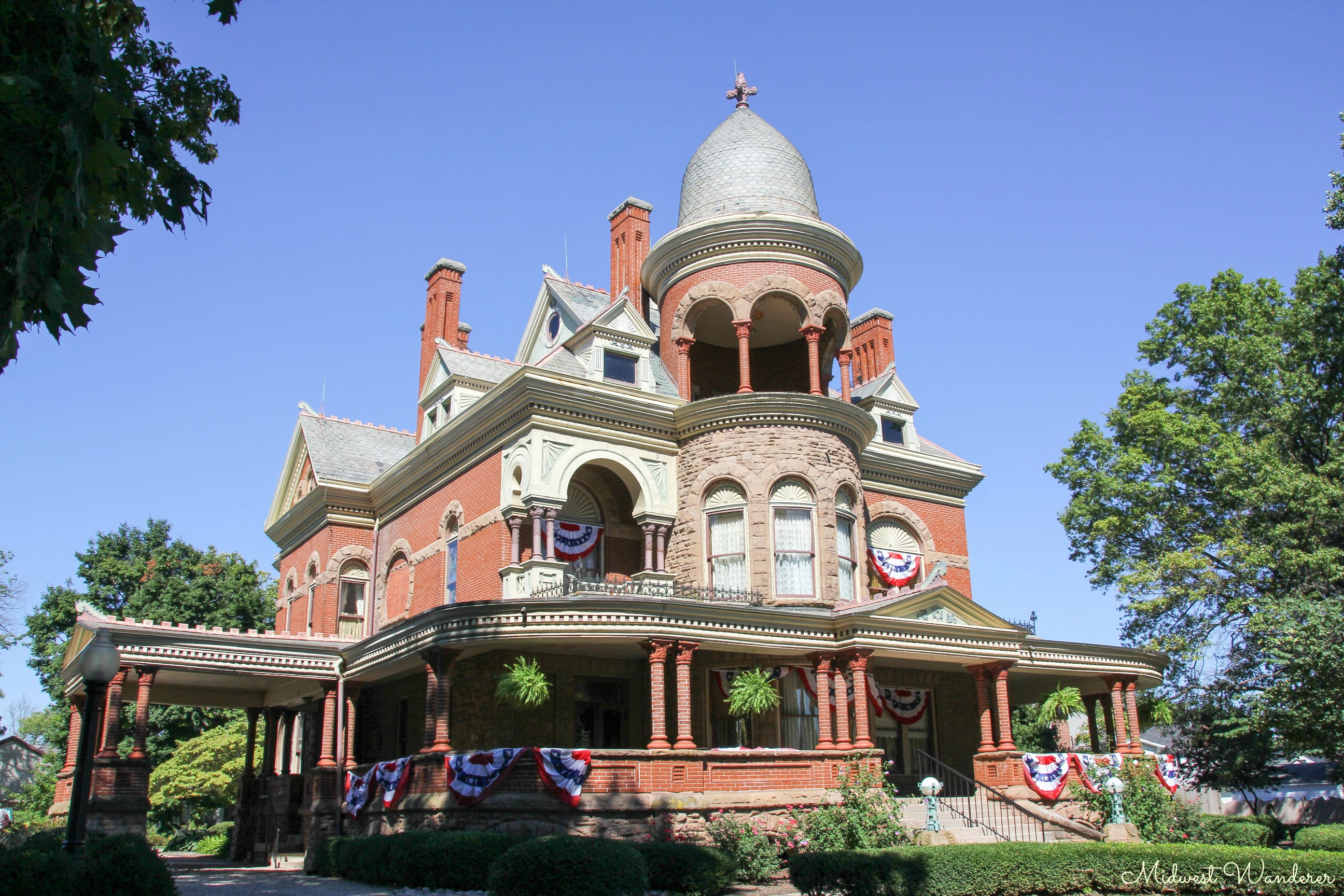 In the 1880s a huge natural gas reserve was discovered in and around Kokomo, Indiana. Kokomo capitalized on what they thought was an infinite supply of gas. The city offered free gas and free land to anyone who wanted to start a factory.

Monroe Seiberling, an industrialist from Ohio, took up the offer. In 1887 he established the Kokomo Strawboard Company. Strawboard is a type of cardboard made from straw, used for shoe boxes, hat boxes, and such.

Two years later, capitalizing on the city’s land and gas offering, plenty of Lake Michigan sand, and a rail line nearby, Seiberling built the largest and most sophisticated glass plant in the country. The Diamond Plate Glass Company produced 10-foot sheets of glass, which at the time, was considered enormous. He had plenty of business. Chicago was rebuilding from the great Chicago fire, and glass was needed for the new buildings.

At the same time Seiberling was building the glass factory, he was also building his grand three-story Neo-Jacobean, Romanesque Revival mansion. He went through the architect’s catalog and picked out all the details. He used a different type of wood in every room. Each side of the pocket doors that separated the rooms was made of the wood that matched the rooms. Carved wood was everywhere. Even small things, like door hinges, were intricately detailed. He installed stained glass windows, a product of the Kokomo Opalescent art Glass Company, in many rooms. It took two years to build the home, at a cost of $50,000. The family moved into the mansion in 1891.

It turned out that the infinite gas supply wasn’t endless after all. The gas fields began to deplete, and the Seiberlings moved to Peoria, Illinois, in 1895. Monroe Seiberling started other companies in Peoria, as well as another glass plant in Ottawa, Illinois.

By 1902, the gas boom was a bust. However, all was not lost. Kokomo had become a large manufacturing town, and still is to this day.

After Seiberling left town, the mansion changed hands several times, until George Kingston bought it in 1914. The Kingston family lived there until George’s death in 1946. Kingston made his fortune by designing and manufacturing the carburetor that Henry Ford used in the Model T. His company also made radios and toys, including roller skates. The roller skates were the type that attached to the shoe. Kingston would often bring several pairs of skates home, and neighborhood kids would test them on the street in front of the mansion.

Indiana University first established a Kokomo extension center in 1945 in a former junior college building. Within two years, they had outgrown that facility. They purchased the Seiberling Mansion from George Kingston’s estate to use as an expansion to their facility.

The university used the mansion as classrooms for almost 20 years. They painted all the walls green, replaced all light fixtures with fluorescent lights, added blackboards, an additional staircase and—well, turned it into a school. The only original light fixture rests at the base of the staircase. 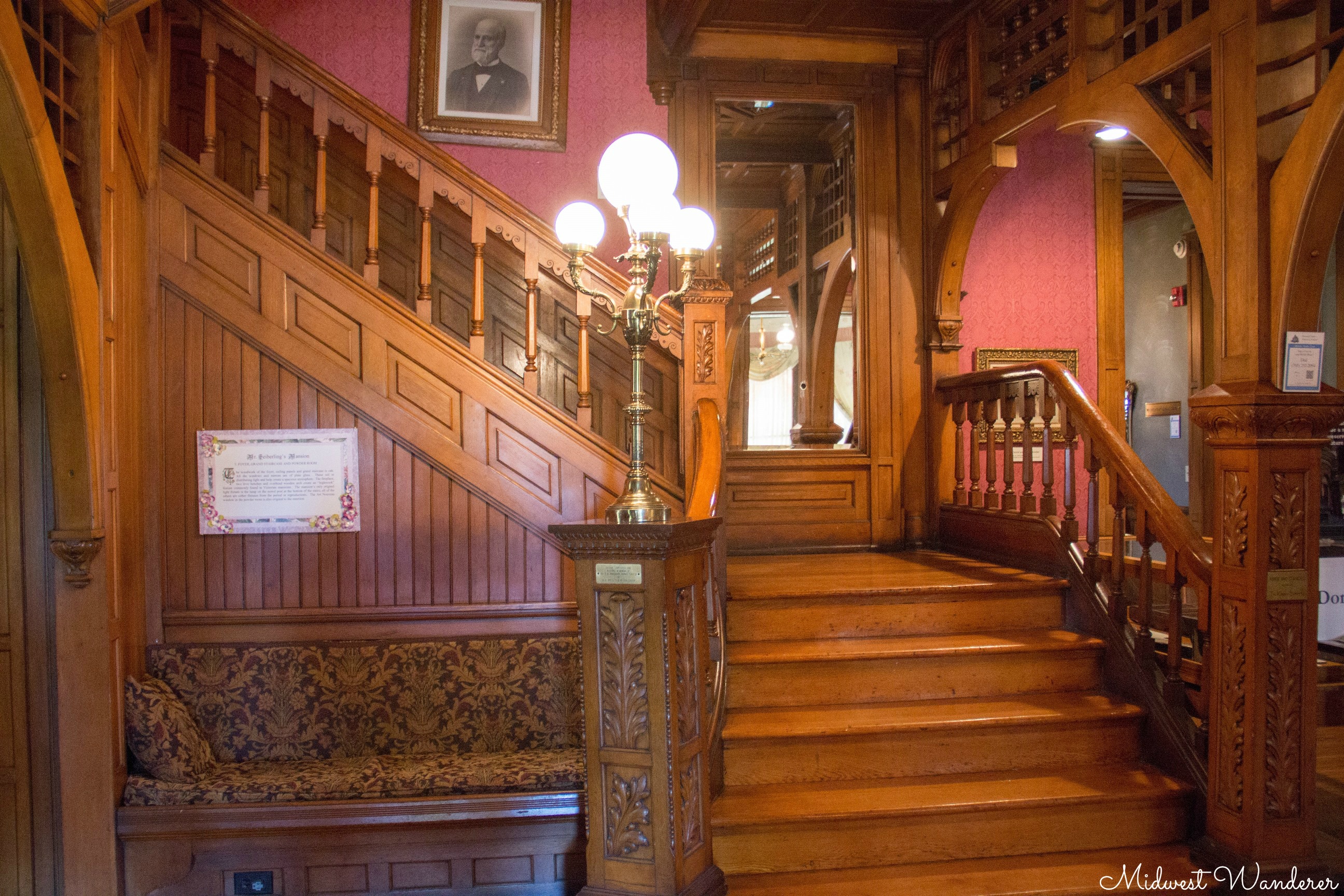 After Indiana University vacated the mansion, it sat empty for seven years.  In 1971, the university turned over control of the property to Howard County to use as a museum. The home is now restored to its original elegance. Because there were no photographs, it wasn’t possible to return it to be exactly as it was. However, there have been a few surprises throughout the restoration process. One of those surprises was the original icebox. Drywall had been placed directly over it. The icebox was found when the drywall was removed. 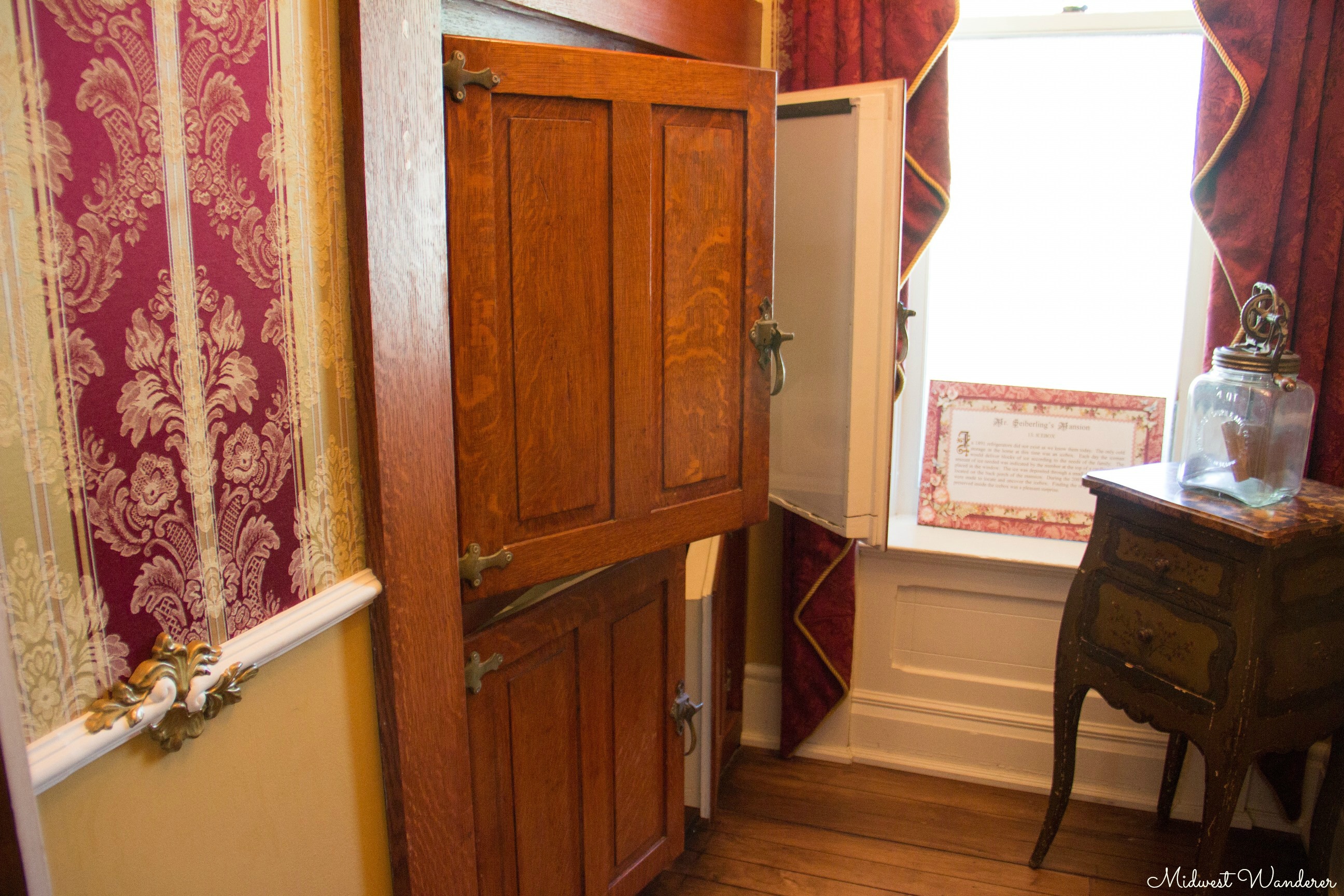 Some of the stained glass that was destroyed by vandals during the years the building sat vacant has been repaired. The Kokomo Opalescent Art Glass, still in business today, uses the same “recipe” as it did when the windows were installed in the 1800s, so they were able to replace the glass.

Since the mansion is home to the Howard County Historical Society, some of the rooms are devoted to museum exhibits, including the third-floor ballroom. Others are decorated as they would have been decorated during the period that the Seiberlings lived there. 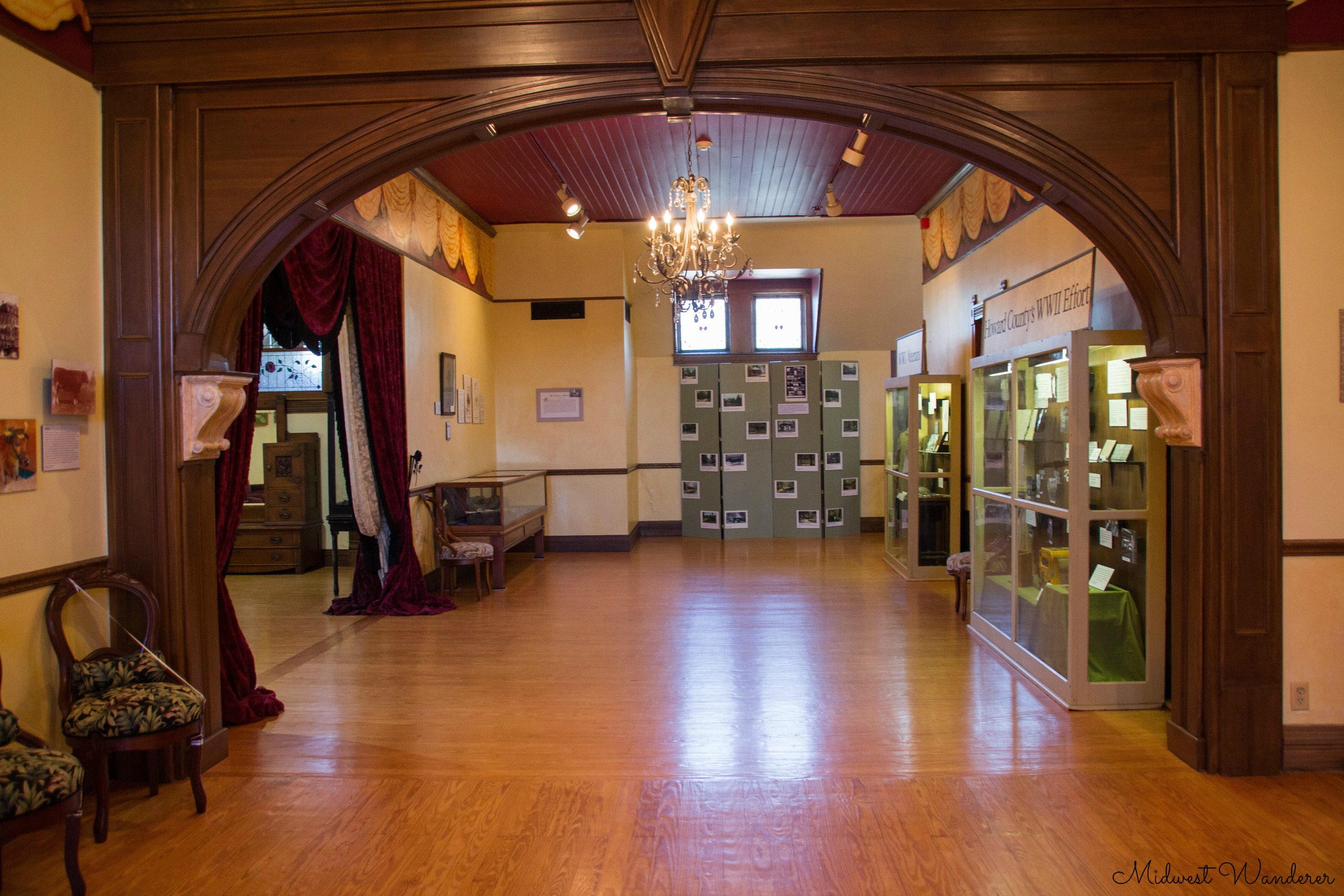 The ballroom opens to an outdoor rotunda, surely used by guests in the home’s heyday as a respite from the stifling third-floor heat. 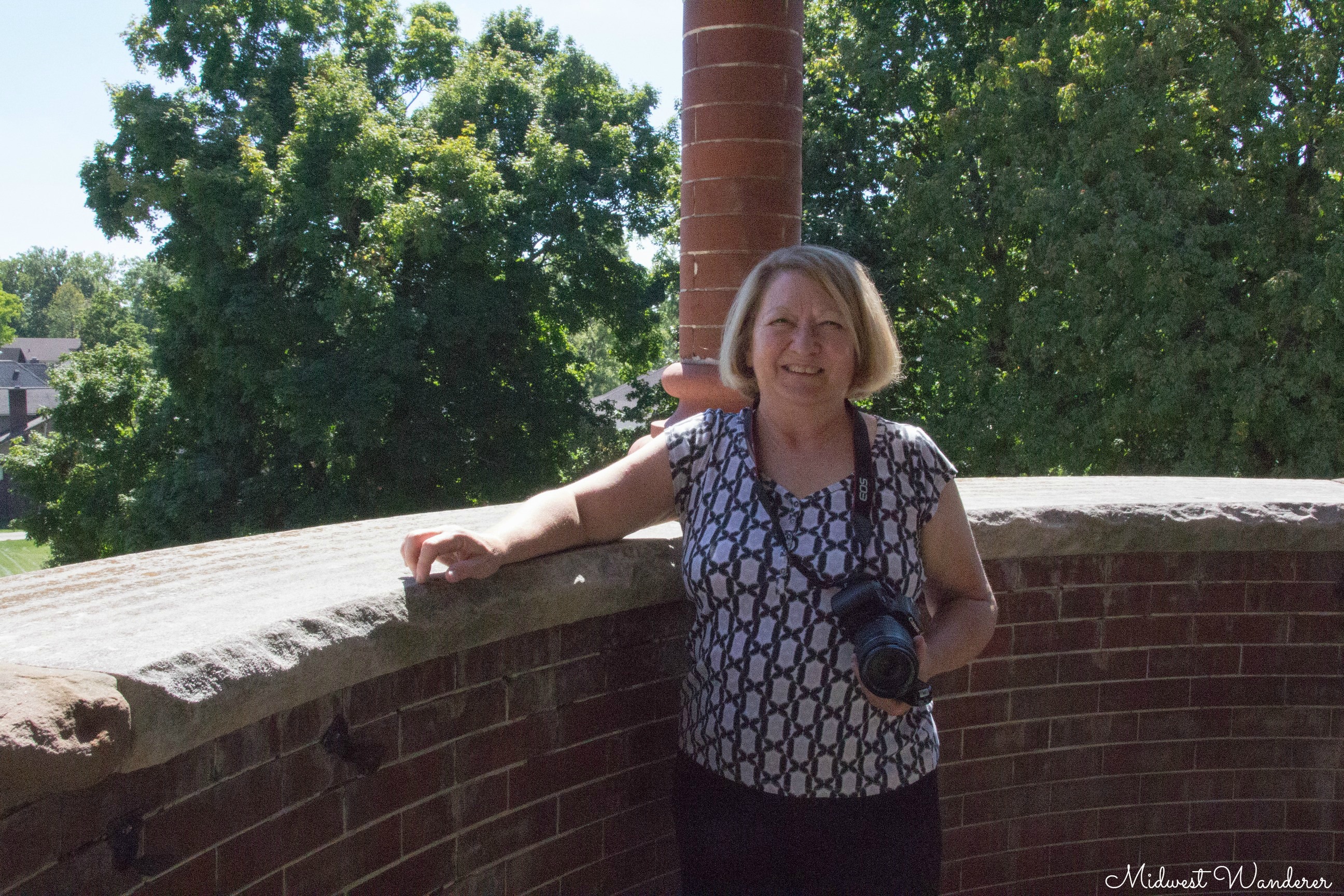 The Howard County Historical Society Museum, located in the Seiberling Mansion at 1200 West Sycamore in Kokomo, Indiana, is open Tuesday through Sunday from 1 p.m. to 4 p.m., February through December (closed during January).  Admission is $10 for adults, and $5 for students 18 and under. Check the website for further details.

We stayed at Courtyard Kokomo during our stay in Kokomo. Find the best Kokomo hotel deal, compare prices, and read what other travelers have to say at TripAdvisor. 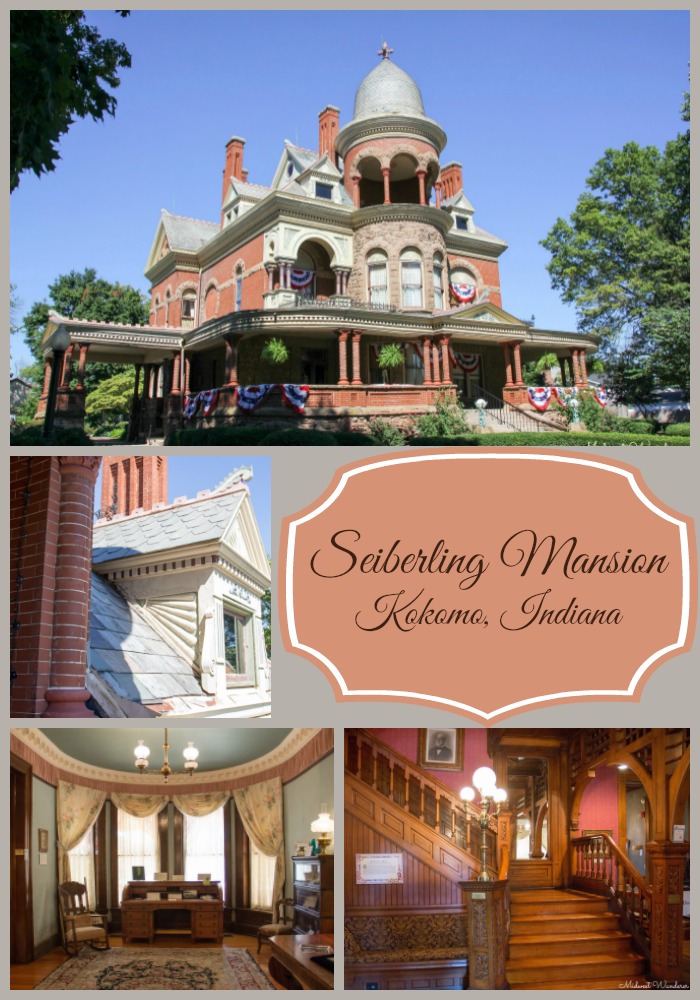 Disclosures: The Greater Kokomo Visitors Bureau and the Howard County Historical Society hosted our visit to the Seiberling Mansion. Our admission was complimentary; however, any opinions expressed in this article are my own.
This article contains an affiliate link. If you book a hotel room through this link, I will receive a small commission at no additional cost to you.

2 thoughts on “Touring the Seiberling Mansion in Kokomo”

Before this summer, I knew little about Wild Bill Hickok. Then, within just a few weeks, we visited three places within Kansas and Illinois that all shared Hickok stories—quite a coincidence. I learned several fascinating facts about him. Here are END_OF_DOCUMENT_TOKEN_TO_BE_REPLACED