This summer we spent a weekend in Webster City, an agricultural community in North Central Iowa. On Day 1 and Day 2 of our visit, folks from the community chatted with us about farming past and present. The third day of our visit highlighted local community entertainment, as well as a stop at a local grocer that emphasizes locally produced foods.

Our first stop of the day was to the Hamilton County Fairgrounds.  Nancy Kayser, a volunteer with the fair foundation and location historian, filled us in on the hundred-plus year fair history and the round barn where we gathered.

The first Hamilton County fair was held in 1857, but it wasn’t an annual event. The Civil War interrupted it, as did a poor economy. However, 2017 will mark the 100th consecutive fair.

The current fairgrounds property was purchased in 1868. A local contractor built the round barn in the early 1900s using locally-made bricks. 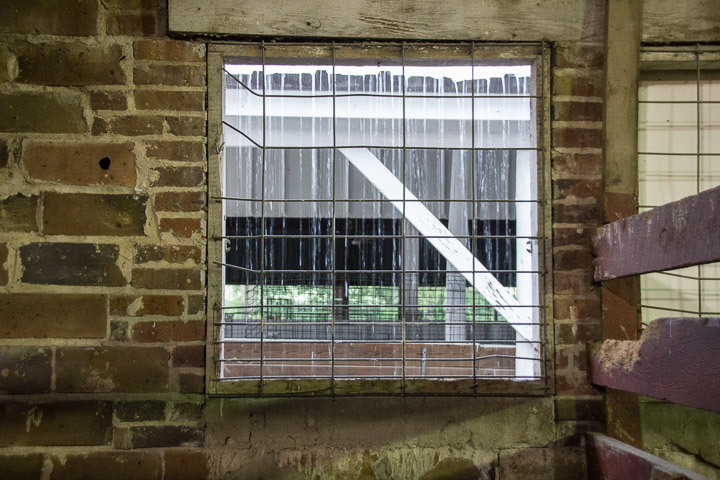 Signs painted on the inside wall advertising local farms date back to the early days and give a peek into the area’s agricultural history. Farmers had just begun naming their farms, which showed that you were a real business.

The round barn was also used for livestock sales in the early days, a big business for the area. Purebred boars could sell for up to $25,000.

Fun fact: L.L. Lyle, a long-time fair secretary, turned down $10,000 for a grand champion boar that he showed at the Iowa City Fair. He brought it home, and it died the next day.

Unfortunately, it was raining too hard the morning we visited to take photos of the barn’s exterior. However, we found a privately-owned round barn later that day, which the owner is currently restoring. At one time over a hundred round barns existed in Iowa, but many of them were torn down in later years. 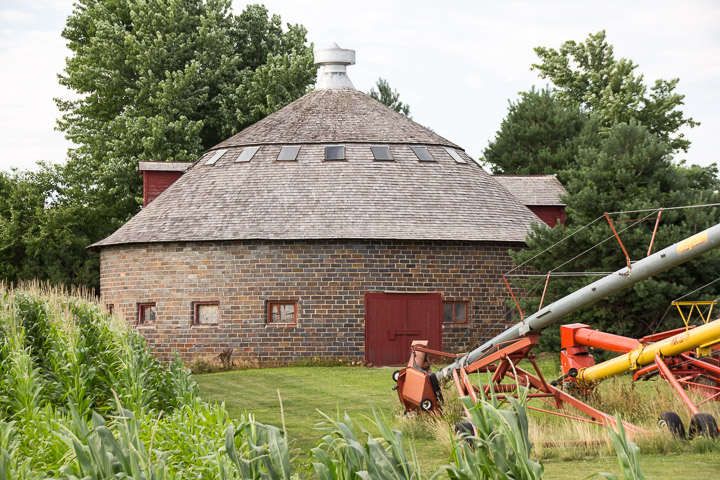 Besides the fair, the Hamilton County Fairgrounds has been known for their racetrack for over a hundred years. They’ve raced everything from ostriches to snowmobiles, although today it’s mostly automobile races.

Fun fact: Back in the day racers who couldn’t afford a car would often “test drive” a car from a local dealer. He would race the car at the speedway, then turn back the odometer and wash the car before returning it to the dealer.

Our next stop was to a Hy-Vee grocery store. Hy-Vee is a regional chain that takes pride in featuring locally sourced foods, including produce, meats and wine. To be part of the program, a food must be produced or grown within 200 miles of that particular store. Produce Manager Troy Dorothy pointed out that his dad grows tomatoes for the Webster City Hy-Vee and fortunately, lives just within the 200-mile requirement. Now that’s local. 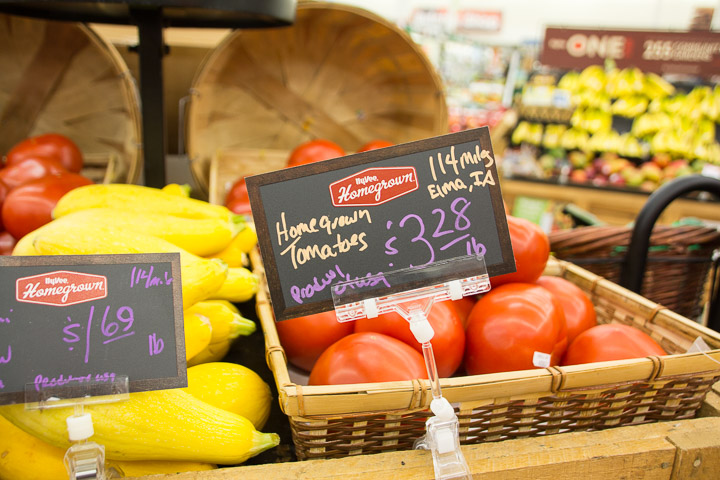 Lunch that day was at Leon’s Pizza, in business since 1972. Leon’s is also known for broasted chicken, which is what we ate. Yum! 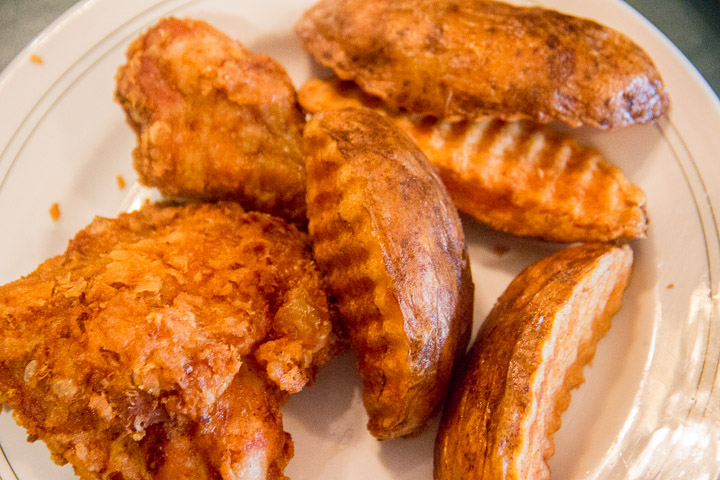 Our last Webster City stop was the Webster City Community Theatre, where we enjoyed a production of “Fiddler on the Roof.” I am always amazed at the talent in community theater groups. 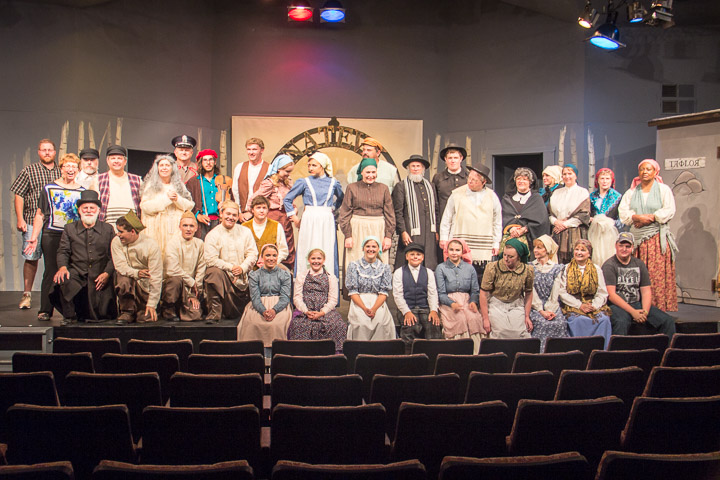 After the play we toured the theater, which is housed in a former church. The organization expanded a few years ago, adding new seats and an addition to the property, thanks to a large estate gift and a capital campaign that garnered huge support from the community. I especially liked the clever pulley system they use for moving costumes from the upper-level wardrobe rooms to the lower level dressing rooms. 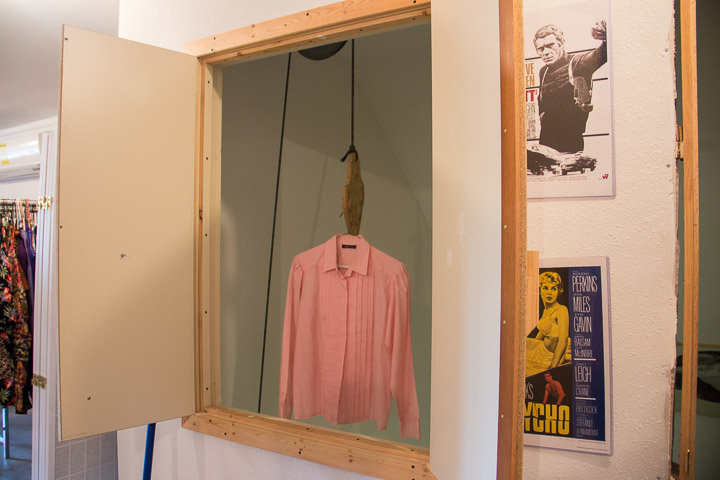 Although the purpose of our visit to Webster City, Iowa, was mainly focused on agriculture, there is plenty to do recreation-wise. Webster City is situated along the Boone River in Hamilton County, Iowa. Area parks offer fishing, canoeing, hiking trails, camping, golf and other outdoor activities. Visit the web site for further information.

Before this summer, I knew little about Wild Bill Hickok. Then, within just a few weeks, we visited three places within Kansas and Illinois that all shared Hickok stories—quite a coincidence. I learned several fascinating facts about him. Here are END_OF_DOCUMENT_TOKEN_TO_BE_REPLACED