I mentioned in my post covering Day 1 of our visit to Webster City, Iowa, that one of my favorite things about my job as a travel writer is learning about a myriad of subjects. Another thing I love is meeting people from different walks of life and hearing their stories. On Day 2 of our visit to this rural community, I met shop owners, artists, farmers, and a student working on his doctoral degree. Every one of them had an interesting story to tell.

Before our day “officially” began, my husband and I went to the Webster City Farmers Market, where I picked up some kringla and a jar of aronia berry-rhubarb-apple jam, both new foods to me. 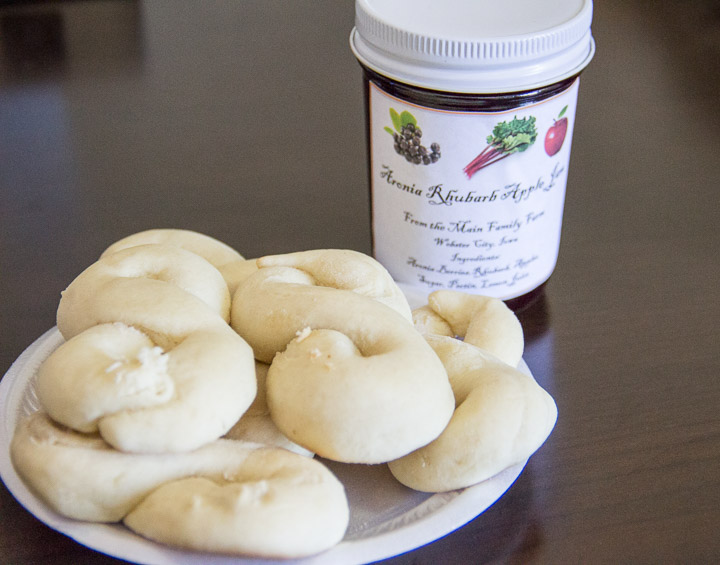 The woman who baked the kringla said that she started making the traditional Norwegian pastry even though neither her mother, nor anyone else in her immediate family, ever made it.

At the Main Family Farms vendor table we sampled several aronia berry products before making our choice. When I mentioned I wasn’t familiar with aronia berries, the woman who made the jam gave me a short lesson in them. Aronia berries are common throughout the Midwest and the Northeast. Who knew? The bitter berries, also knowns as chokeberries, are almost never eaten raw, but rather used in jam, ice cream, and even wine. I’ve since read that aronia berries have a distinct, hard-to-describe flavor, but I thought the jam I bought had a flavor similar to cranberries.

We also chatted with two students at the market who represented the Iowa State University Extension and Outreach. They were handing out samples of a fresh corn and radish salad, as well as the recipe for the salad. Their goal was to show people new ways to prepare nutritious vegetables. 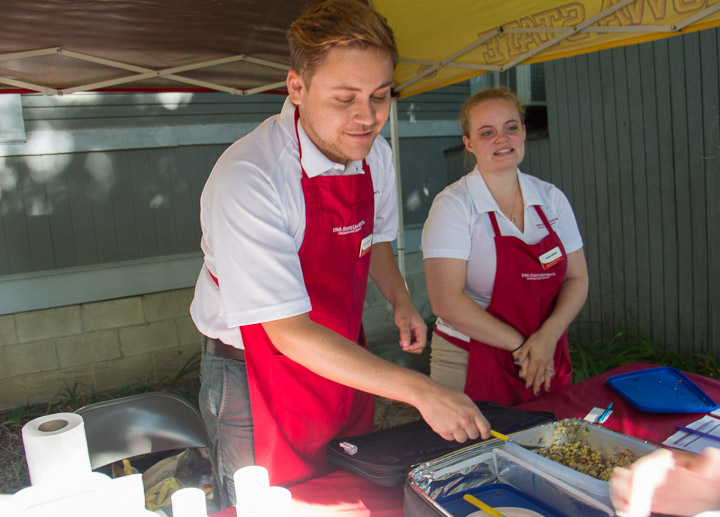 We continued our shopping experience in downtown Webster City, the first stop of the day with the rest of the travel writers on the trip. The first shop we visited was SOS Vintage, an antique consignment shop. Rather than renting spaces to dealers like an antique mall, owner Denise Smith picks and chooses what she thinks will sell, takes them in on consignment, and creates her own creative displays. 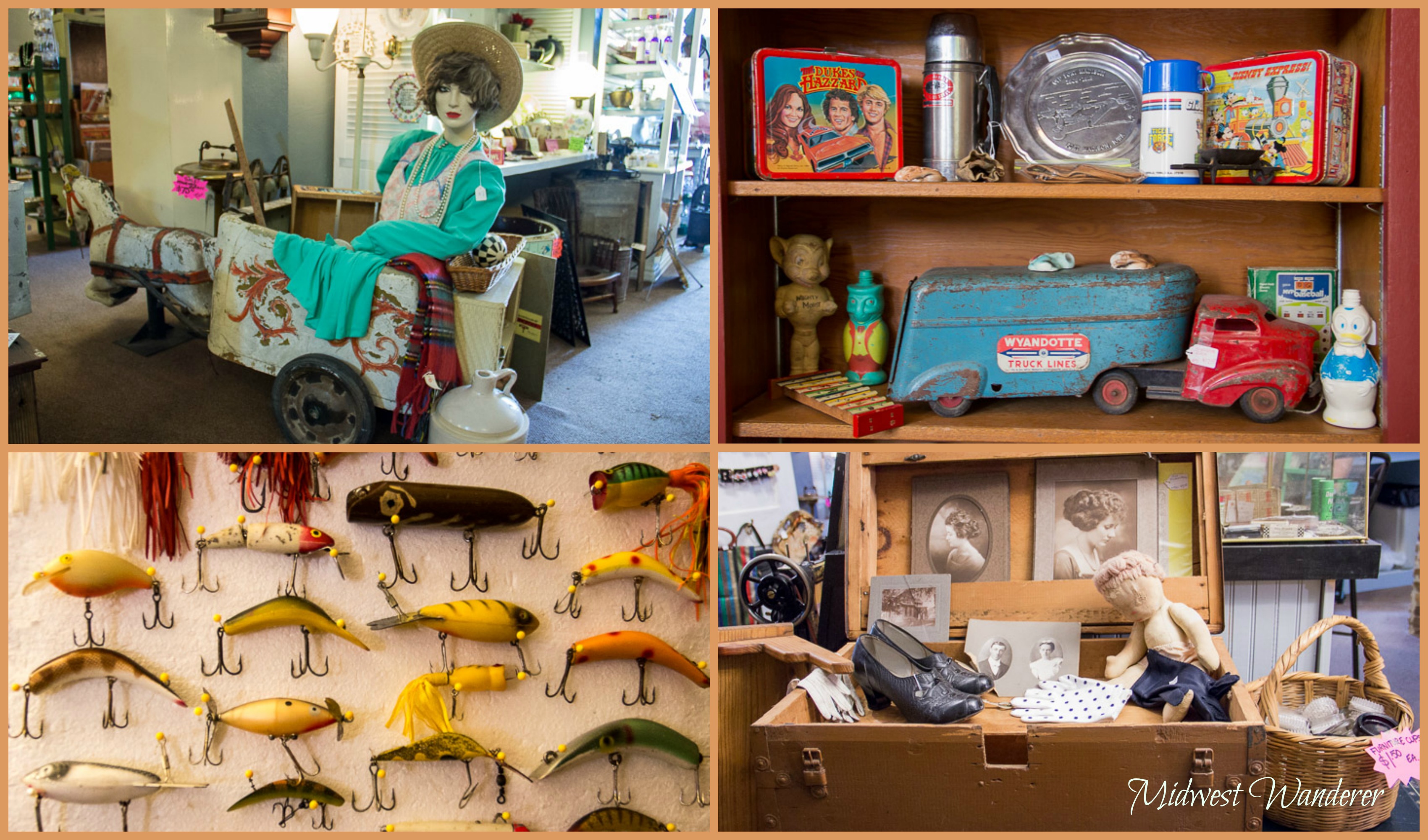 Denise got her start with SOS Vintage thanks to a chance meeting with Deb Brown, Executive Director of the Webster City Area Chamber of Commerce. Previously, Denise occasionally sold antiques at area shows. She was at one such show when Deb admired her display and told her she really should own a shop. Before she knew it, she purchased a building in downtown Webster City and was in business. “It’s just been a wild, wild ride ever since then,” Denise said. “But I don’t regret a minute of it.”

Timothy Morgan rents out a small space at the front of SOS Vintage for his Good Works Leather + shop. Tim, a disabled veteran, has been working with leather, on and off, since he was a 12-year-old Boy Scout. He does a lot of commission work and goes above and beyond what is asked. Tim said if a lady asks him to make “a purse that [has] XYZ, well I like to take it one step further and give her ABC, as well.”

After leaving SOS Vintage, our group went separate ways to visit other shops. My husband and I stopped at Mornin’ Glory Coffee Shop, where he got his coffee fix, and I enjoyed a mango smoothie. 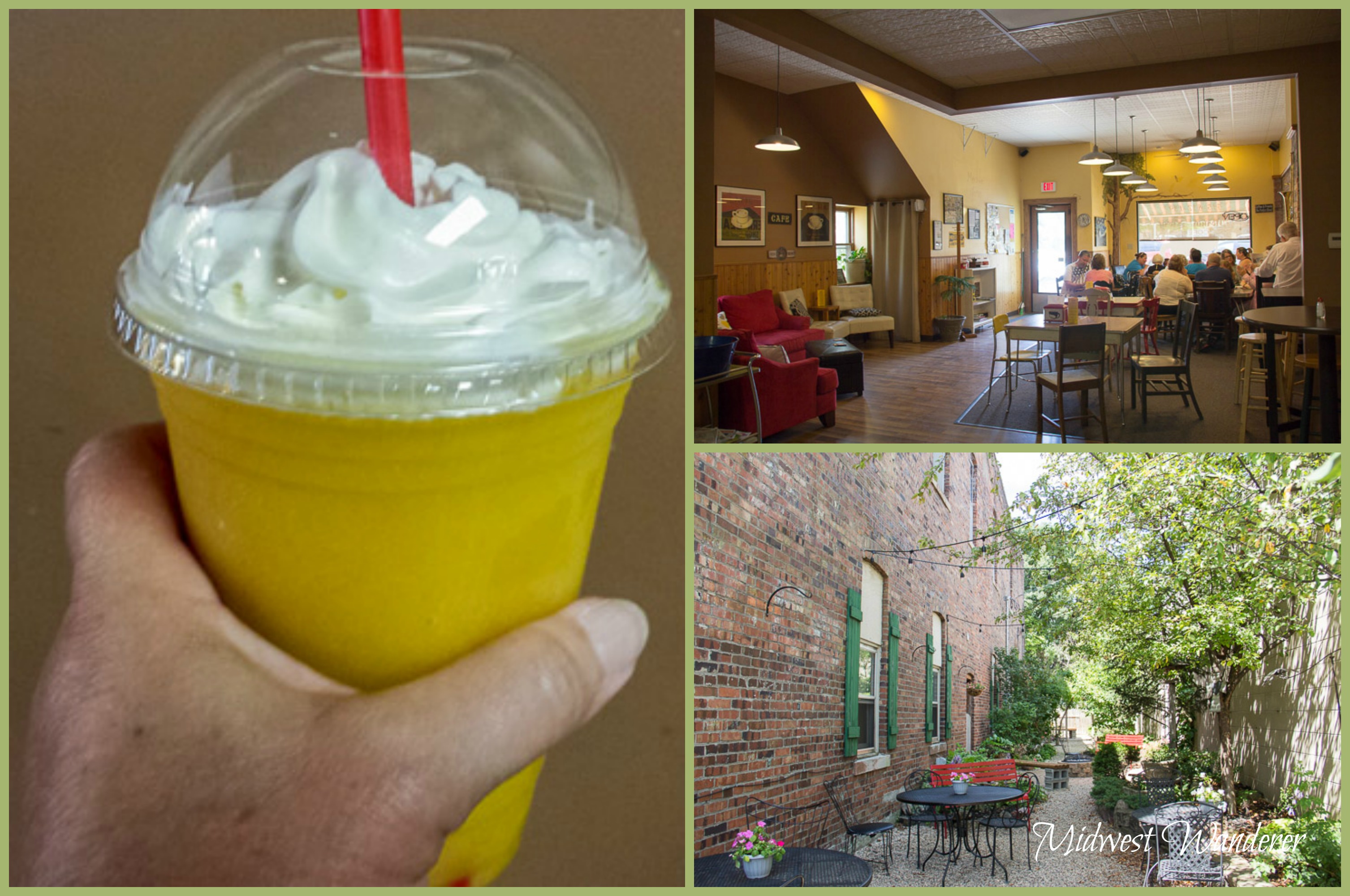 One place downtown that we didn’t get to was the Webster Theater, a movie theater saved by the town. The theater, which dates back to the 1920s, closed because it wasn’t making money, and the building went up for sale. Deb Brown said people were coming into her office every day begging to have the theater saved. Eventually, nine people formed a board, created a 501c3 non-profit organization and asked people to donate. In a year’s time the organization raised a quarter of a million dollars to revitalize and reopen the theater. 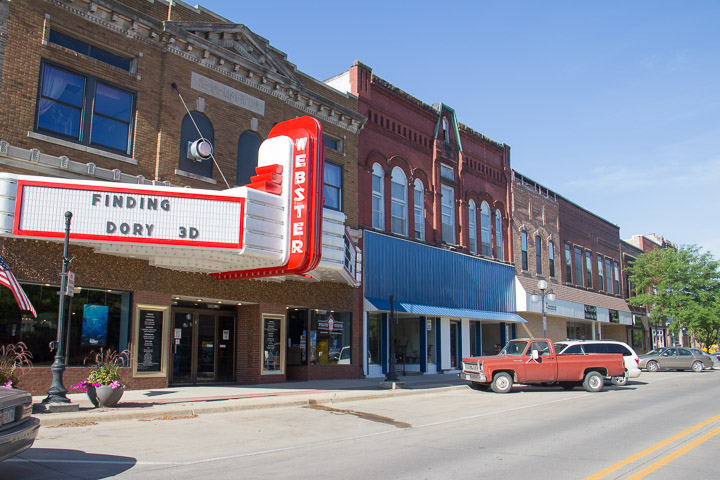 Our group came together again at Produce Station Pottery, where owner Maureen Seamonds gave us a history of the building and demonstrated her pottery craft. The building was originally an ice house and later served as a produce station. Farmers would stop by, drop off their goods and then do their shopping downtown. The produce station folks, among other things, would separate cream from the milk and candle eggs. Maureen still has some of the paraphernalia from that era in the shop, including ice tongs and egg candlers.

After oohing and aahing at the gorgeous pottery pieces and sculptures that Maureen and her students made, Maureen led us outdoors, where she demonstrated a technique used in Raku pottery. The technique involves taking the pottery piece, which has a copper glaze on it, directly from the kiln and placing it into a metal trash can with newspaper. The newspaper and the combustible glaze catch fire.  Maureen then snuffs out the flame by putting the lid on the garbage can. Watch part of the demonstration here:

Following our Produce Station Pottery visit, we made an impromptu stop at the Kendall Young Library.  Kendall Young was a wealthy man who settled in Webster City in the 1800s. When women in the town approached him for money to build a library, he turned them down. However, in his will Young left a generous endowment for the library. The library was established in 1896, and the building opened in 1916. The Beaux-Arts architecture includes a gorgeous stained glass dome, stained glass windows and carved pillars.

After making a quick stop at the local Casey’s General Store to pick up pizzas for lunch, we went out to a farm to see retiree Vern Ratcliff’s collection of antique tractors and his Doodlebug. What’s a Doodlebug? It’s a sort of minibike built in Webster City in the 1940s.

Every September Doodlebug owners gather in Webster City for a reunion. “The most [Doodlebugs] we’ve ever had on display at one time, I think, was around 90,” Vern told us. “But we get people, on the average, from about seventeen states every year.”

Vern and his wife, Viola, also reminisced about their childhoods. Viola recalled her grandpa having a team of horses. However, since her dad owned a tractor, her grandpa no longer used the horses for farming. She also remembered cooking on a coal stove until electric lines were installed in the area in the mid-1940s.

Vern described how they used to put loose hay up in the barn in the days before baling became common. They would bring it to the barn on a hayrack and load it up through the door at the top of the barn using a sling and heavy rope. 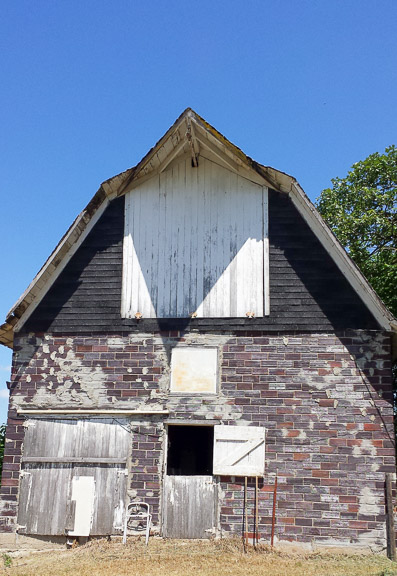 Our visit with the Ratcliffs concluded with Vern showing us his antique tractor collection. One tractor especially dear to him is one that his dad bought new in 1958 and that Vern got to drive home from the dealer. His dad sold it at an auction in 1978. Twenty-eight years later Vern located it and bought it back.

Our last stop of the day was to Bob and Leah Maass’ farm where we learned about Sturated Riparian Buffer Zones, drank Iowa wine, enjoyed a pork chop dinner and learned about hog farming.

Drainage tiles in a saturated riparian buffer zone redirect drainage water to a control box. As the water flows through the control box, microbes remove some of the nitrates, and then redirects the water in multiple directions back into the buffer zone. Tyler collects monthly soil samples from random areas of the buffer zone and analyzes them in the school lab. So far, data shows the control box definitely decreases the amount of nitrates that flow into the water.

A Lesson in Pork Production—and Pork Chops for Dinner

Back at the Maass farmhouse, we sat around the kitchen table sampling local wines before dinner. I’m no wine connoisseur, but I thought most of the wines were quite good. One of the most popular with our group had a name that brought a big chuckle: White Crapp. 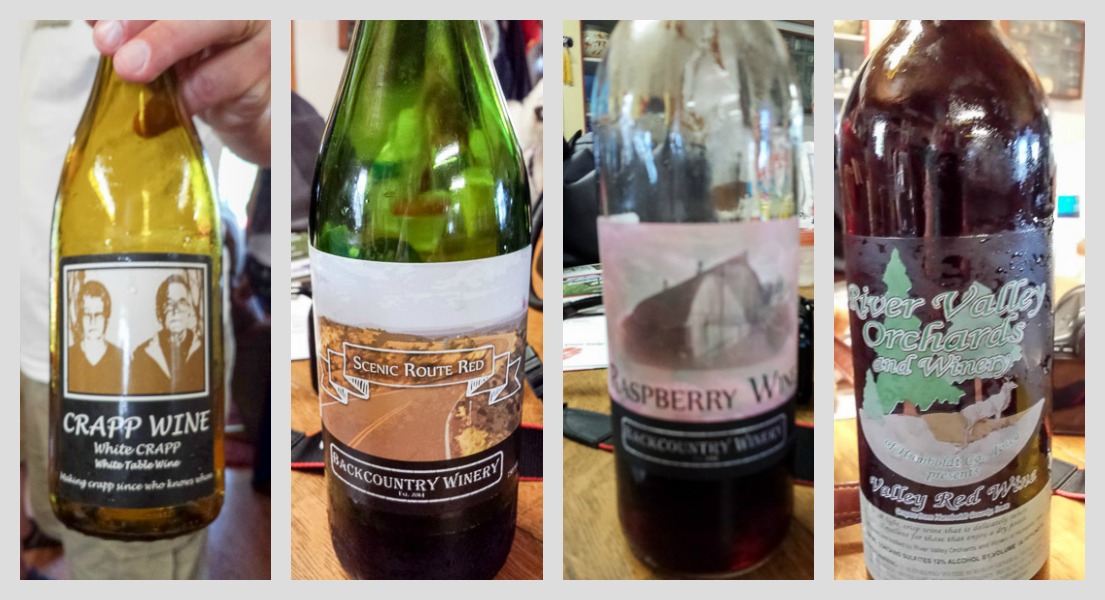 While we enjoyed our wine, Scott Tapper and Gene Gourley from the Pork Producers cooked a pork chop dinner for us. Appetizers that preceded dinner included smoky/salty/sweet bacon-wrapped pineapple. Yum! And the pork chops were tenderly delicious.

Scott and Gene also baked pineapple upside-down cake on the grill in cast iron Dutch ovens. Here’s a video of them removing the cake from the pan:

To end our evening, Scott and Gene gave a presentation on pork production. Some of the key takeaways were:

After a day of shopping, eating and learning, we headed back to the hotel for a night’s rest before a third day of experiencing rural life in Webster City, Iowa.

Stay tuned for Day 3 of our Webster City experience…coming soon.

Before this summer, I knew little about Wild Bill Hickok. Then, within just a few weeks, we visited three places within Kansas and Illinois that all shared Hickok stories—quite a coincidence. I learned several fascinating facts about him. Here are END_OF_DOCUMENT_TOKEN_TO_BE_REPLACED