According to the 2010 U.S. Census, over 82,000 people, 12.5% of South Dakota’s population, are of Native American descent, either fully or in combination with other nationalities or ethnicity. The Pine Ridge Indian Reservation in southwestern South Dakota, at 2.8 million acres, is larger than Delaware and Rhode Island combined. Not surprising, several of the places I visited during my September South Dakota trip emphasized Native American heritage, including Lakota Ways in Wall and several stops on the reservation.

At the Lakota Ways facility in Wall, experience authentic Native American traditions. We were treated to a mini pow wow, which included several dances. The short video below shows part of one of these dances.

Our group participated in traditional games, including tossing a twig into a bucket several feet away. We found it isn’t such an easy thing to do.

Raising a tipi isn’t as easy as it looks either. We no sooner got ours raised that it toppled over. 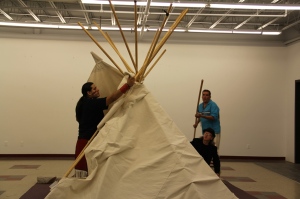 At the crafts boutique in the Lakota Ways facility you can purchase items handmade by Native Americans, including jewelry, paintings and decorative items.

The Pine Ridge Area Chamber of Commerce and Visitor Center includes a small museum in which you learn about the history and culture of the Lakota. You will often hear the terms “Oglala,” “Lakota” and “Oglala Lakota.” To clarify, the Oglala are a subset of the Lakota tribe. You may also hear of the Nakota and Dakota. Lakota, Nakota and Dakota are all the same tribe, but pronounced using different dialects, depending on the region. The majority of Oglala live on the Pine Ridge reservation.

Exhibits in the visitor center include a display of natural species in the form of taxidermy, as well as Native American clothing, accessories and other items used in day-to-day Lakota living. 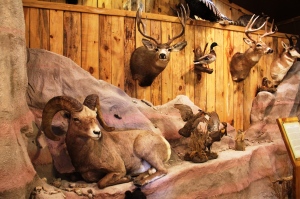 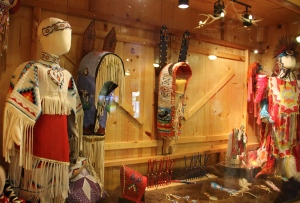 The audio tour at the Oglala Lakota College Historical Center describes the displayed photographs and artwork that chronicle the history of the Oglala Lakota from the early 1880s to the 1890 Wounded Knee Massacre. 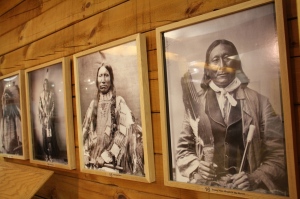 The site of the Wounded Knee Massacre is a national landmark. For many years the conflict was referred to as a battle. However, the story is that the Indians were forced to surrender any and all weapons to the U.S. Army. One deaf-mute Indian didn’t understand and struggled to keep his gun. During the struggle the gun went off, and immediately the Army besieged the Indians with gunfire. Within an hour 146 Native American men, women and children were dead. Thirty-six soldiers also died during or as a result of the conflict. The Indians were buried in a mass grave, which is marked by a monument today. 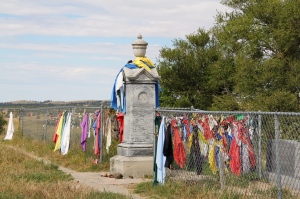 The Red Cloud Indian School was established by Chief Red Cloud who requested that Jesuits come to the reservation to set up a school “so that our children may be as wise as the white man’s children.” The difference between this school and other Jesuit-established Indian schools is that students continue with Lakota culture. In fact, they are required to take Lakota language classes. The Red Cloud Indian School is a private institution, but no tuition is charged. The school is funded by donations (95%) and Title I grants (5%).

Sacred Heart Church, on the grounds of the school, was the first Catholic Church organized on the Pine Ridge Reservation. The original church building, built from 1896 to 1898, burned in a fire on Good Friday, April 5, 1996. Only the baptismal font was saved, which is now in the vestibule of the new church. 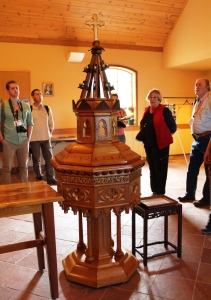 The church’s interior design includes many Native American elements, including the Stations of the Cross that were designed by four Lakota artists. The stained glass windows are a traditional Lakota design. 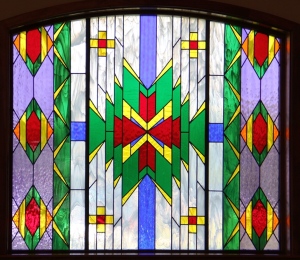 Not living in an area with many Native Americans, visiting these South Dakota sites was enlightening. I learned much about the history and heritage of the Oglala Lakota. I was also encouraged by the programs put in place to reduce the 89-96% unemployment rate of this blighted community.

When you visit South Dakota, I strongly encourage you to visit not only the major tourist attractions, but also some of these lesser-known places, to get a real feel for the area’s history and Native American heritage.

Disclaimer: My visit to South Dakota was hosted by the South Dakota Department of Tourism. However, all opinions in this article are my own.

Howard Steamboat Museum in Jeffersonville, Indiana, pays tribute to the Howard family and their steamboat building company. The tour combines a history of the ornate Edmonds and Laura Howard mansion and the shipyard located across the street, which the Howard END_OF_DOCUMENT_TOKEN_TO_BE_REPLACED