Did you know there are fossil beds in Indiana? They’re some of the the largest, naturally exposed Devonian fossil beds in the world! Last autumn we visited Falls of the Ohio State Park, where the fossil beds are located. Luckily, it was the river’s low time of the year, and it happened to be lower than in most years. That meant more fossils were exposed than usual. 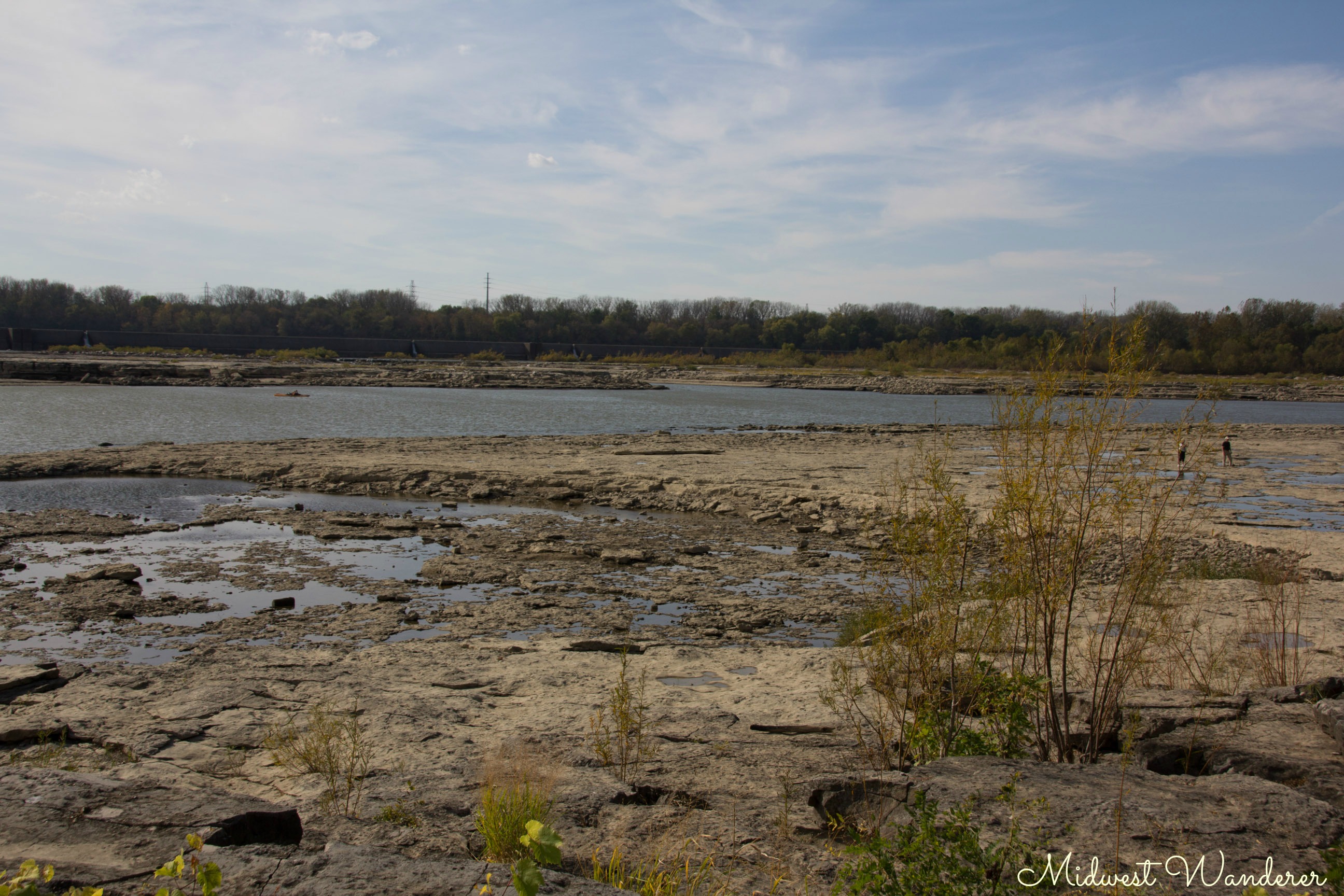 Falls of the Ohio Interpretive Center

Before heading down to the river, we stopped at the Falls of the Ohio Interpretive Center. In a ten-minute orientation film where we learned how the fossil beds were formed 390 million years ago.

After the film, interpretive naturalist Jeremy Beavin took us on a tour of the Interpretive Center, wher exhibits focus on the area’s geology, archaeology, and history. Exhibits are simple enough for kids to understand and include plenty of interactivity. Yet, they’re interesting for adults, as well. 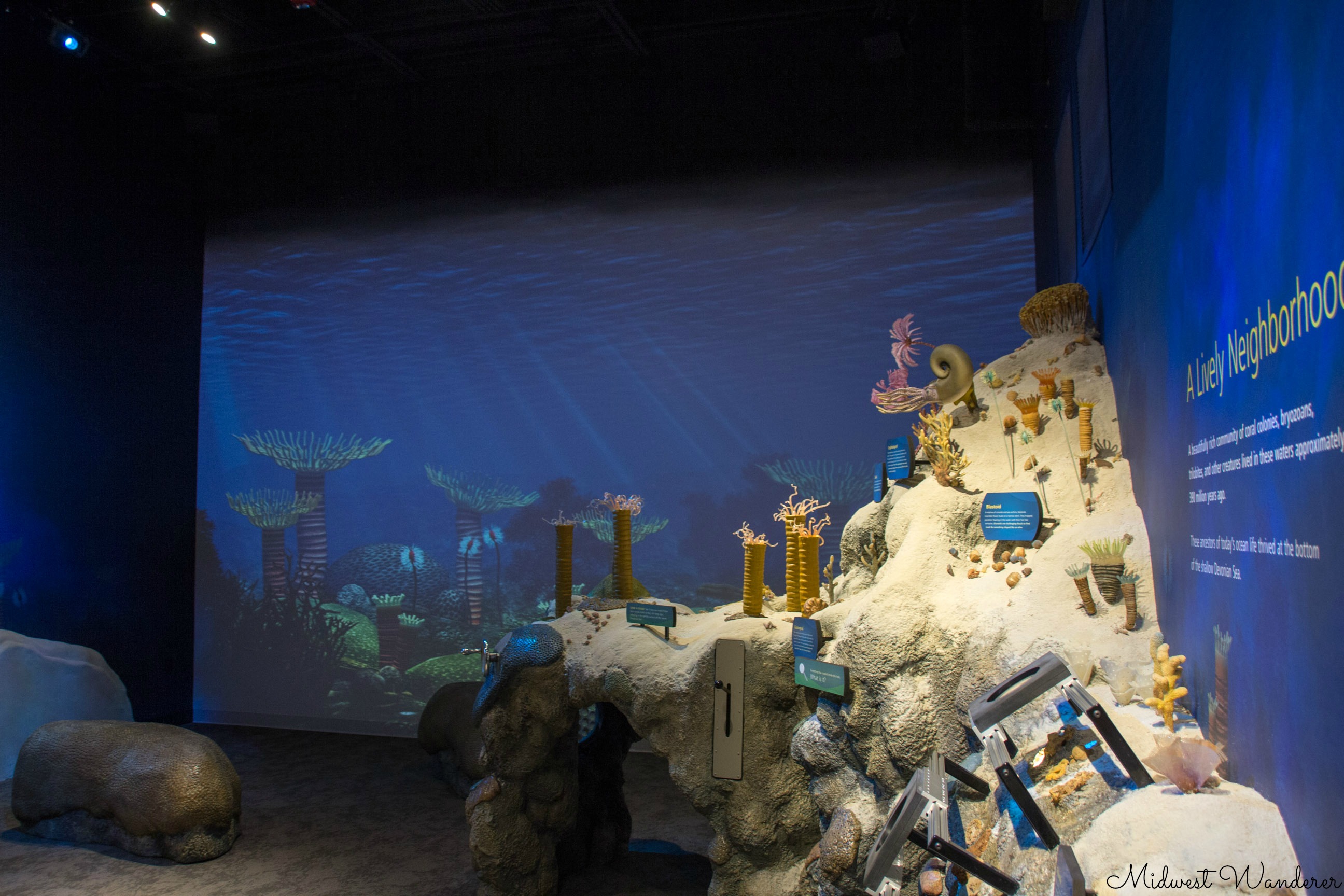 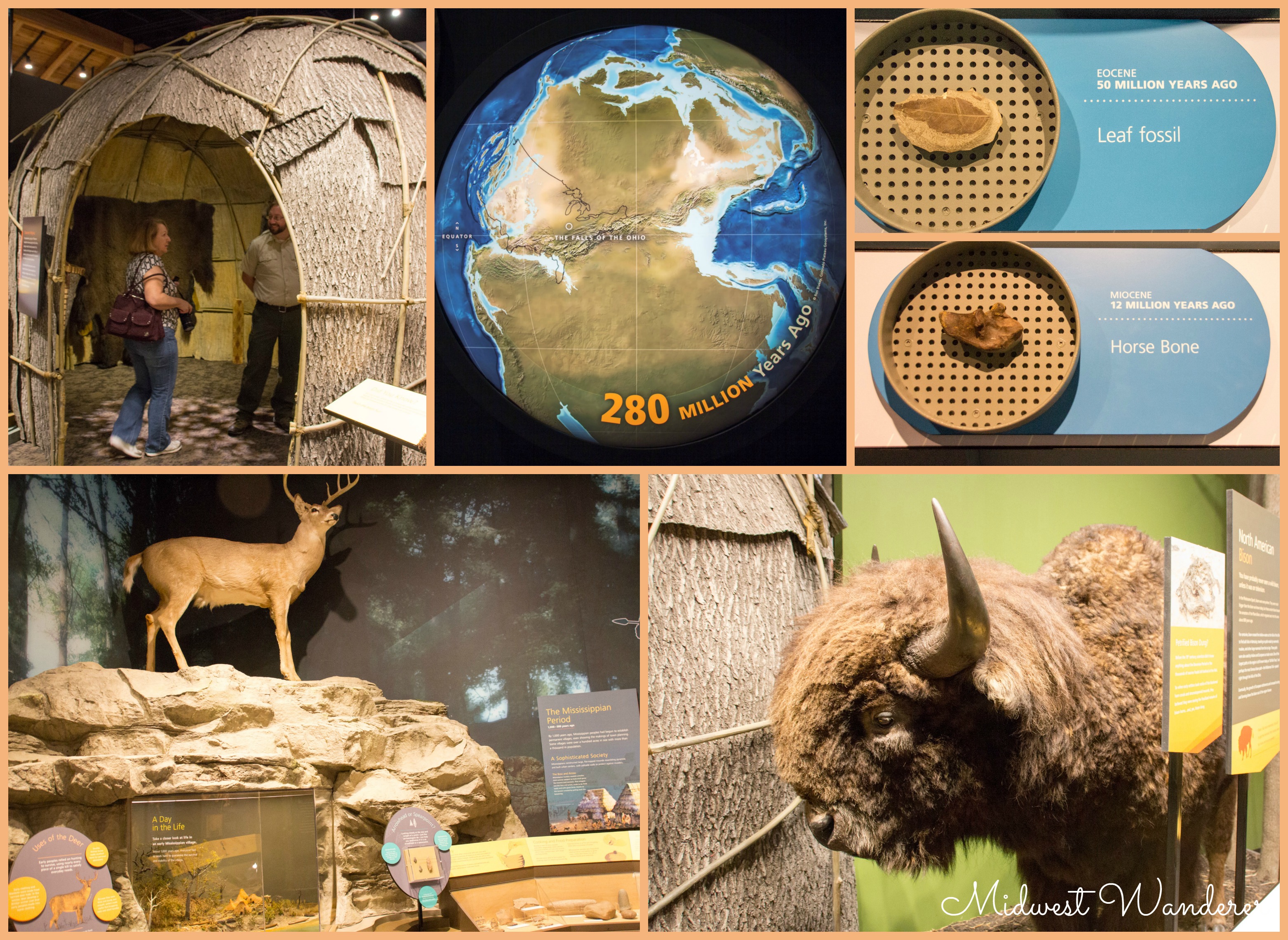 Following our Interpretive Center tour, Jeremy led us outside, down to the fossil beds located on the banks of the Ohio River. “They’re literally everywhere,” Jeremy told us. “But a lot of people don’t know what to look for. So we do have fossil brochures available to help them out.”

He wasn’t kidding that fossils are everywhere!  I expected to have to hunt for them, but they really were all over. Jeremy sprayed the rocks with water, which makes the fossils easier to see. (He recommends bringing a spray bottle of water with you.) Jeremy pointed out trilobites, crinoids (they look like Cheerios), horn coral, and many more fossils. 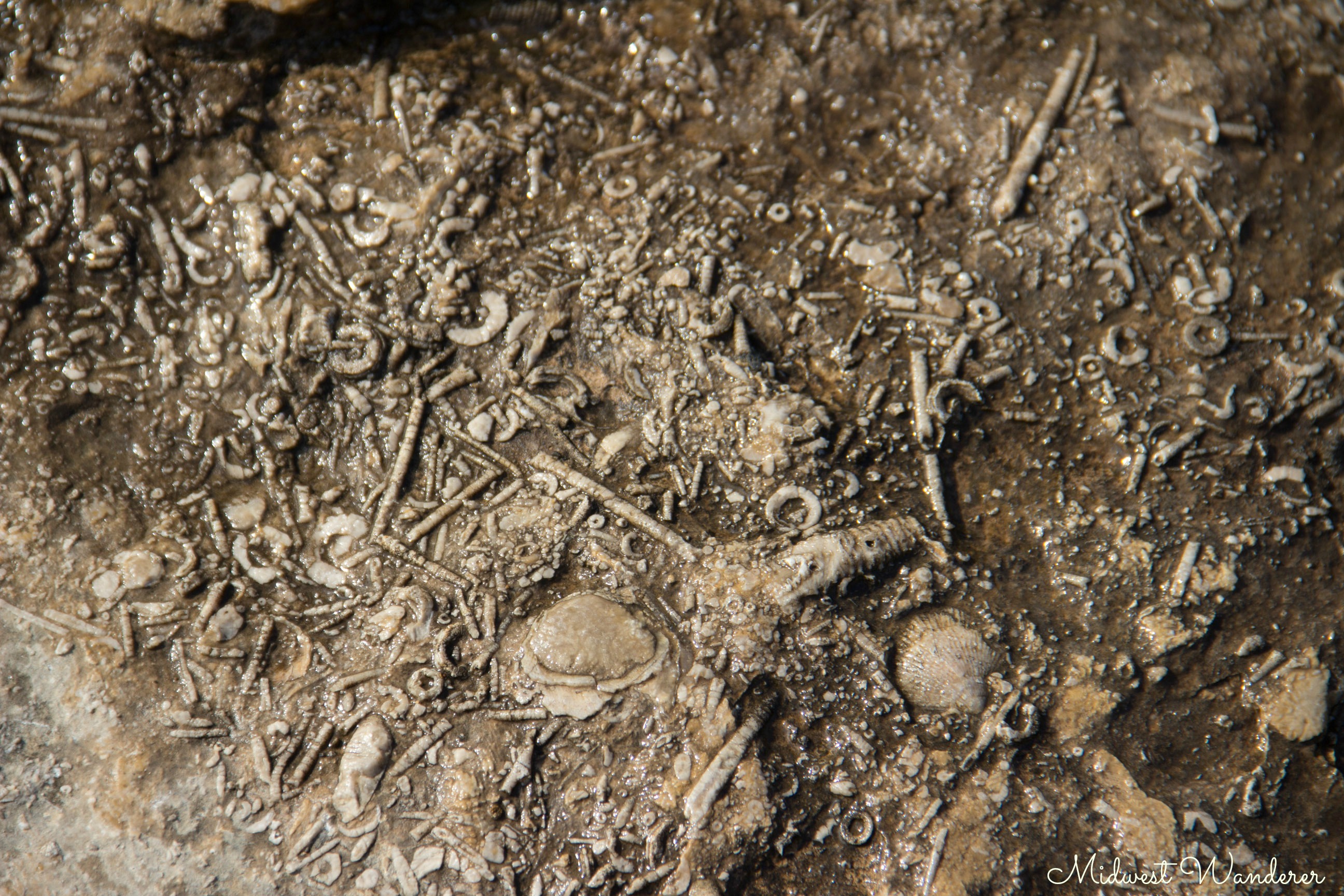 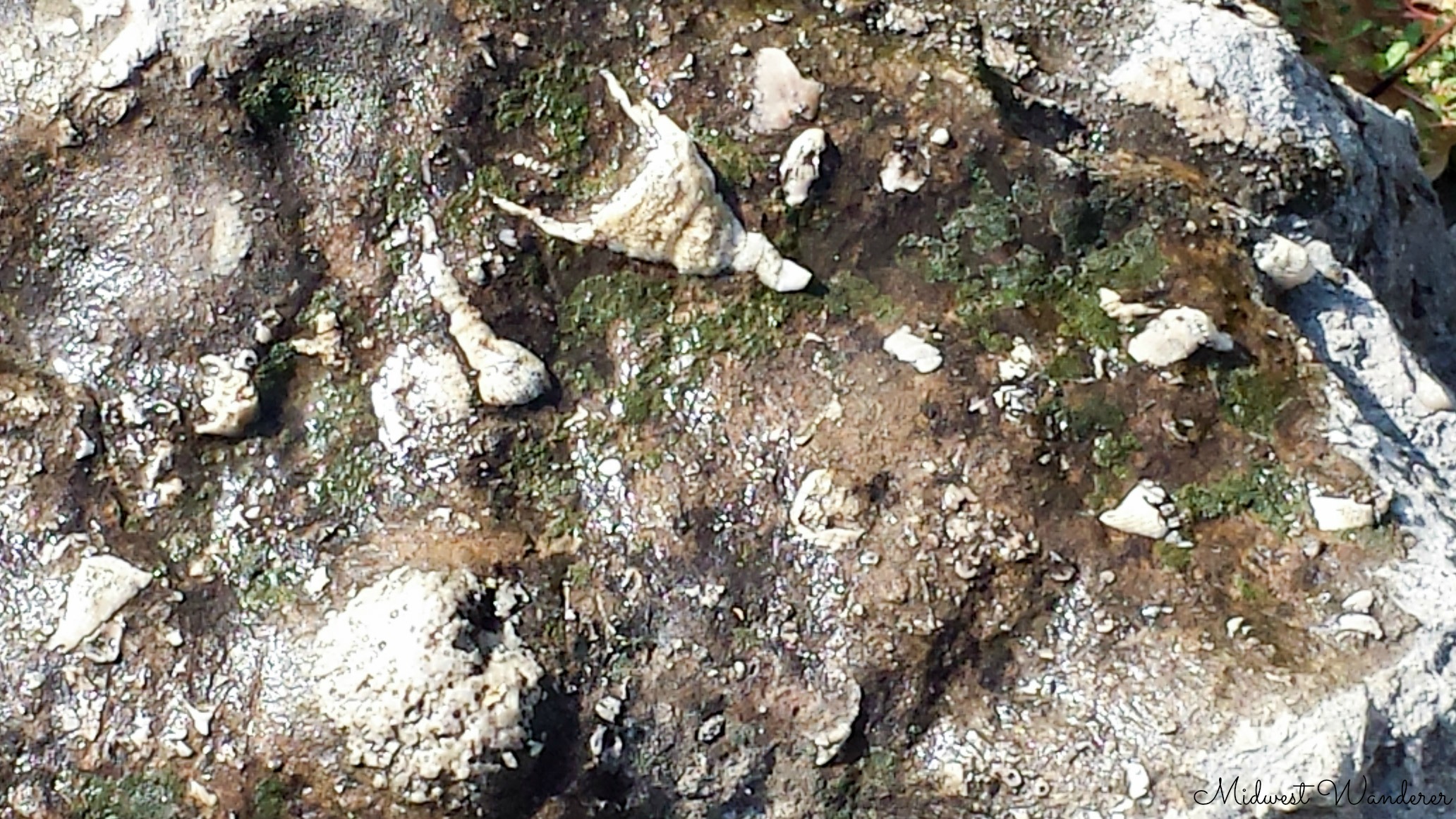 “The farther you go down [toward the river] the older they are. As you go down, the fossils are less common, but they tend to be a little bigger.”

The river and fossil beds formed over millions of years, and they haven’t stopped evolving. The fossil beds weather away, but as some fossils fade away, others appear. “Over by that tree we used to have a couple real nice snail fossils that we used to show people,” Jeremy explained. “They’re gone. But afterwards, those two trilobites appeared that I showed you. Those used to not be visible.” 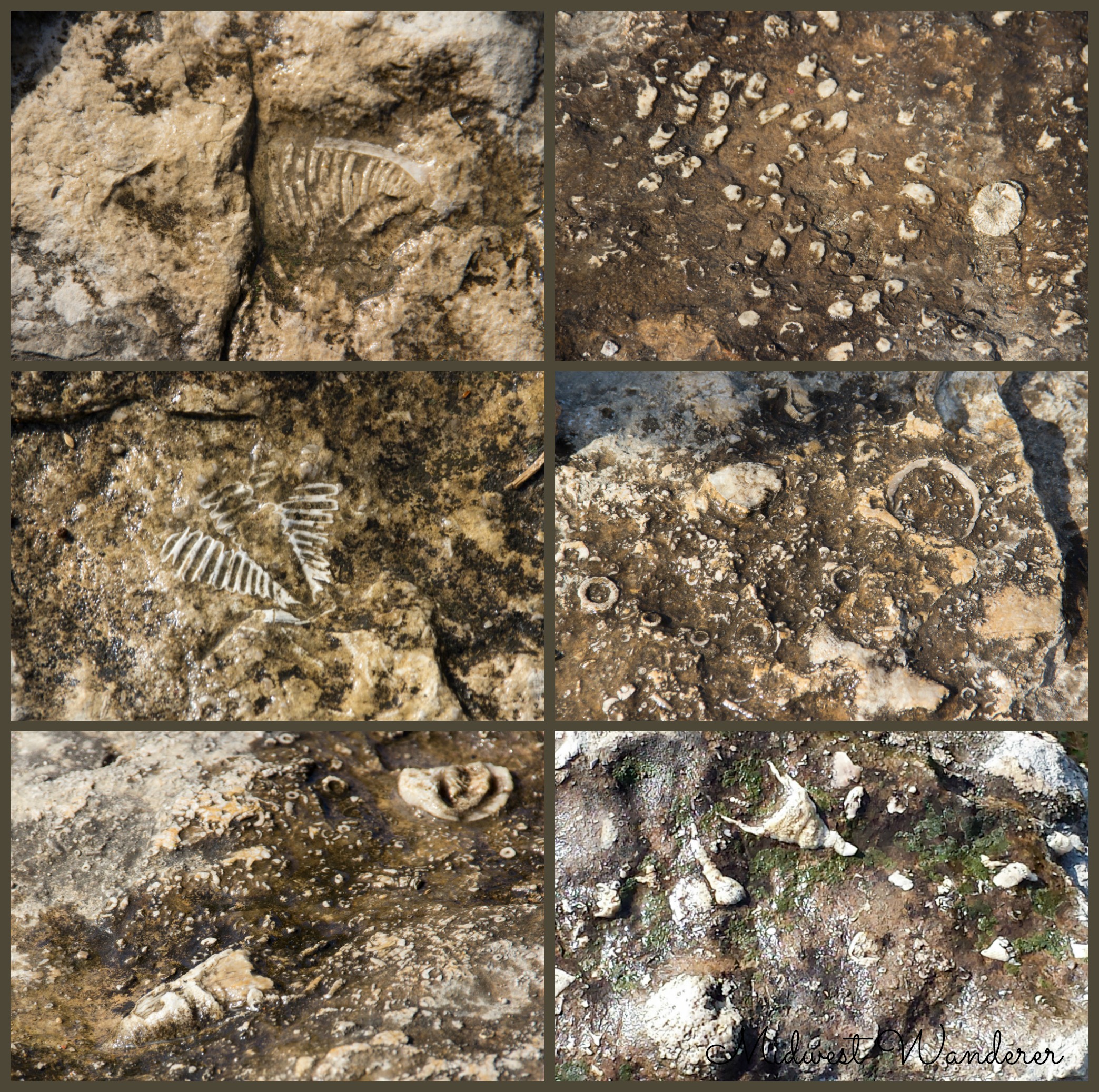 Today fossils weather away naturally, but at one time they were disappearing at the hands of humans. There were houses and bait shops along the river. People dumped garbage there. And they collected fossils, cutting them out of the bedrock. In the late 1960s Falls of the Ohio became a wildlife conservation area and eventually a state park. Fossil collecting is no longer allowed. If it’s driftwood you’re after, though, you’re welcome to it. “We encourage people to take driftwood,” Jeremy told us. “As you can see, the river brings us a fresh supply every time it raises its level.” 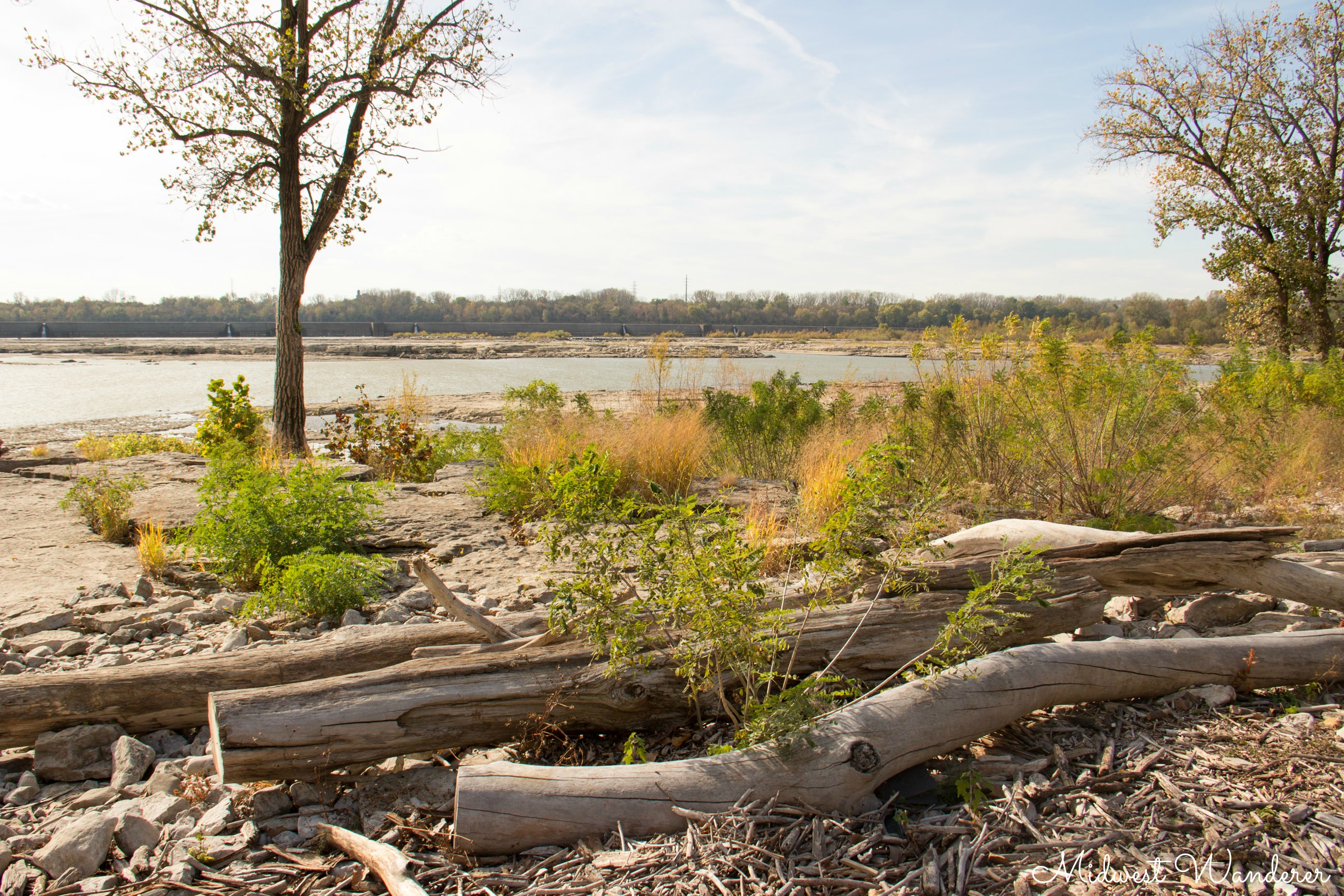 If you visit Falls of the Ohio State Park

We stayed at the Market Street Inn Bed and Breakfast during our visit to Jeffersonville. Check rates here. 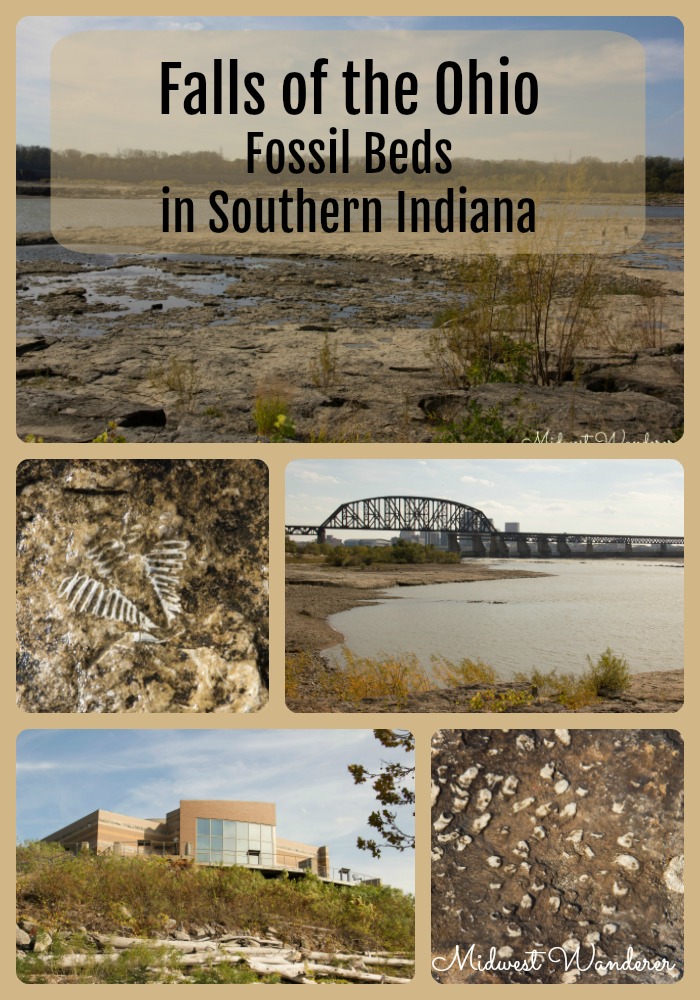 Disclosures:  The Clark-Floyd Counties Convention-Tourism Bureau and Falls of the Ohio State Park hosted our visit to Falls of the Ohio. However, any opinions in this article are my own.
This article contains an affiliate link, which means if you book a room through the TripAdvisor link above, I will receive a small commission at no additional cost to you.

4 thoughts on “Exploring Falls of the Ohio Fossil Beds”

Before this summer, I knew little about Wild Bill Hickok. Then, within just a few weeks, we visited three places within Kansas and Illinois that all shared Hickok stories—quite a coincidence. I learned several fascinating facts about him. Here are END_OF_DOCUMENT_TOKEN_TO_BE_REPLACED