Here is the story of how the Mammoth Site of Hot Springs came to be. Once upon a time, in a prehistoric land not so far away, giant creatures roamed the earth. One day, over sixty male Columbian and wooly mammoths left home never to be seen again. Stories about the disappearance were passed down through generations of mammoths until the stories became legend. Males claimed females drove them away, to a mass suicide. Females claimed the males went on a hunting trip, got lost, and refused to ask for directions. The species eventually became extinct, and of course, the legend became extinct along with the mammoths.

Fast forward many millennia, to 1974 A.D., and the Black Hills of South Dakota, where a contractor purchased property for development. When he started excavating, he found bones—lots of them. It turns out he discovered the lost mammoths in what was once a giant sinkhole. The developer sold the land to a non-profit organization at his cost with the stipulation that all bone material must stay, and the site used for education and research. Thus was born the Mammoth Site of Hot Springs, South Dakota.

When I was told we would be visiting the Mammoth Site last summer, where digging and discovery are still occurring, I expected to be outdoors in a muddy mess, since it was raining that day. It turns out a climate controlled building was constructed around the Mammoth Site, which of course, makes a lot of sense. Visitors can take a guided tour of the site, learn more in the attached museum, or even volunteer to participate in the digging.

On the site tour, you walk around the perimeter of the sinkhole to see the bones displayed in the positions in which they were found. 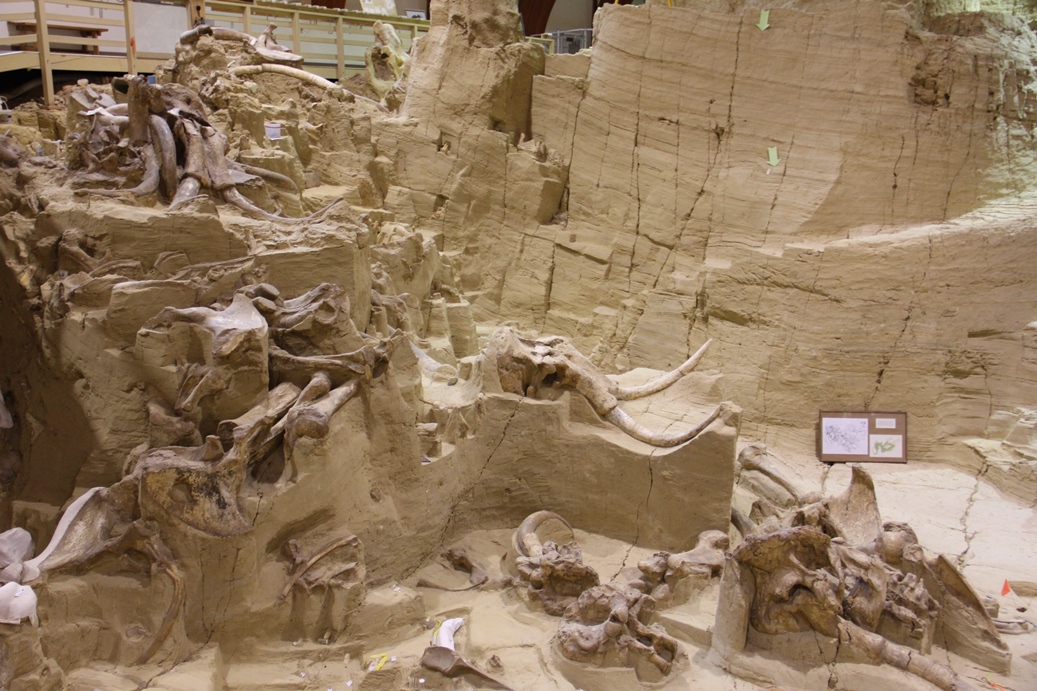 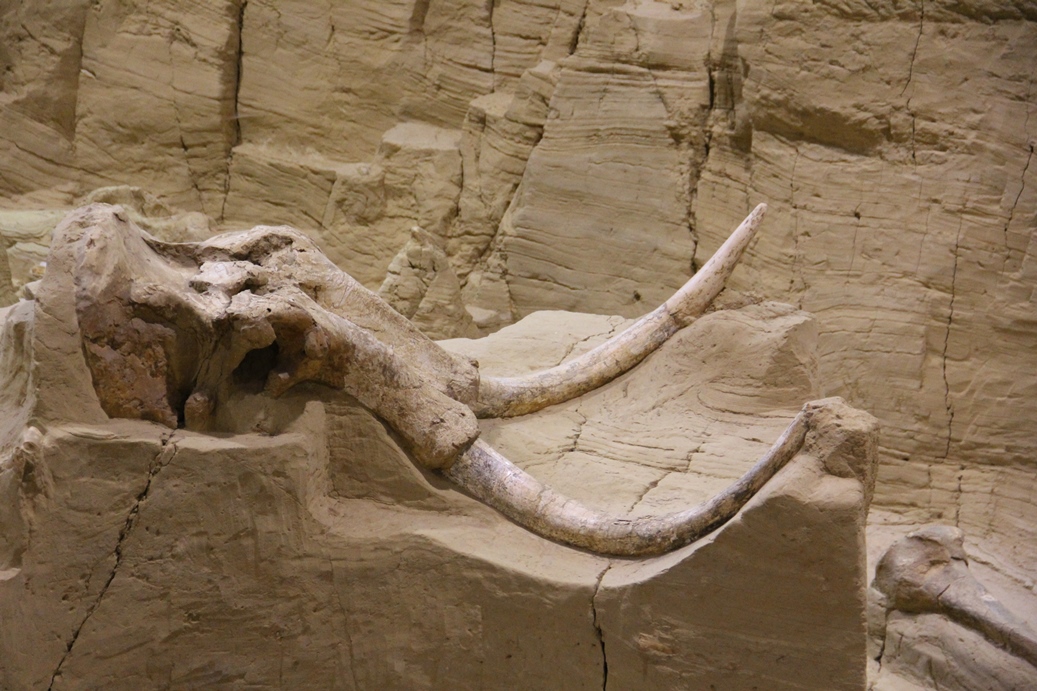 It was when our guide showed us a femur and a jaw bone up close that it struck me just how massive these animals were. 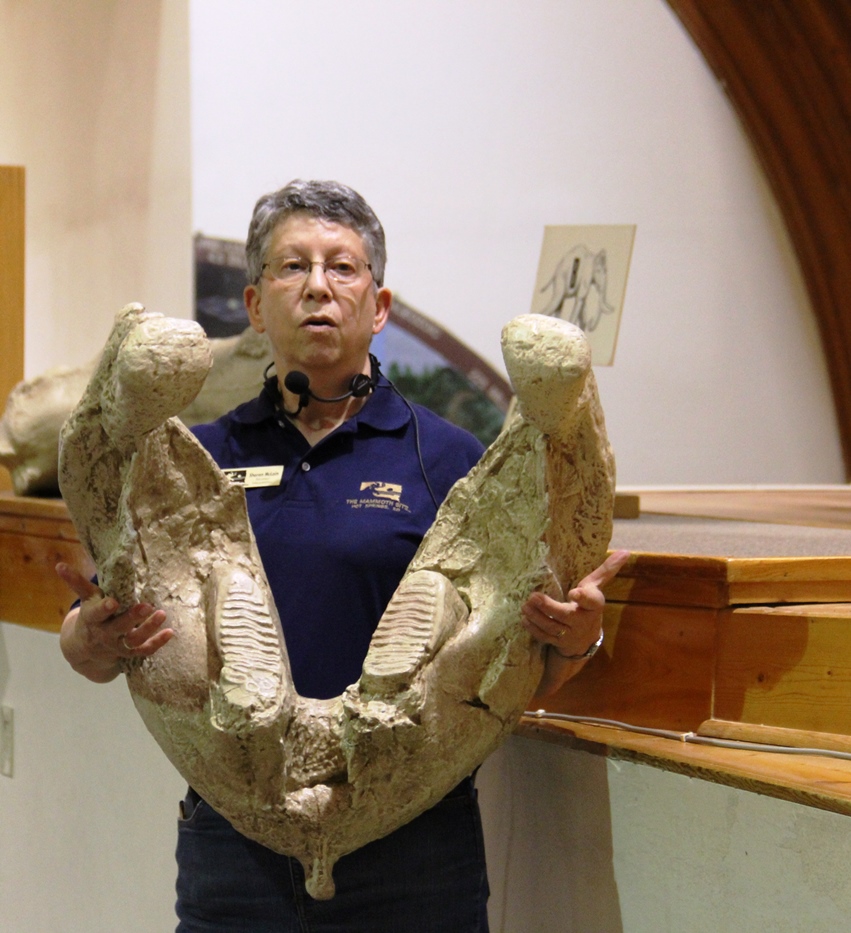 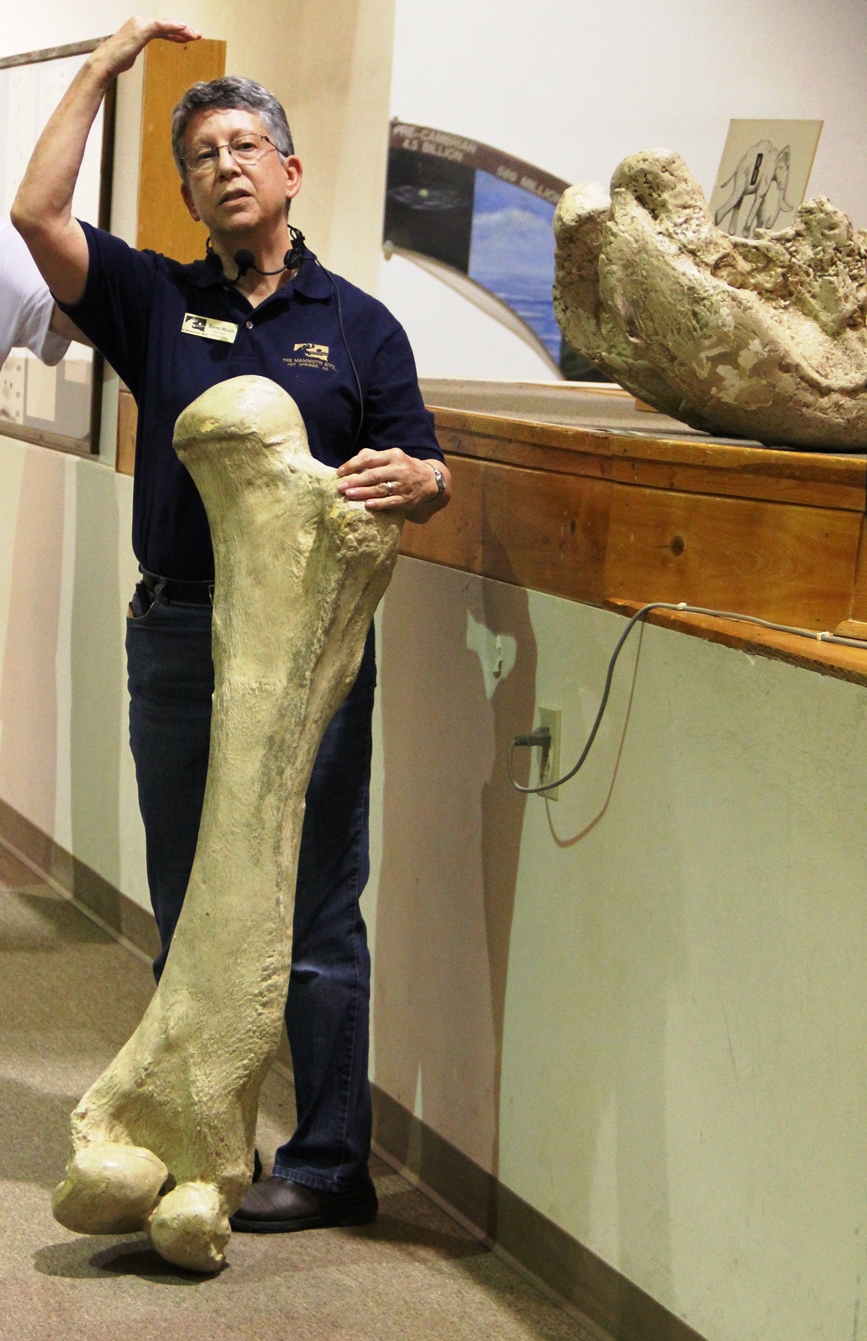 Our guide pointed out the most complete of the mammoths they’ve discovered so far. They’ve named him Napoleon Bonaparte, the emphasis of course, on the last name. 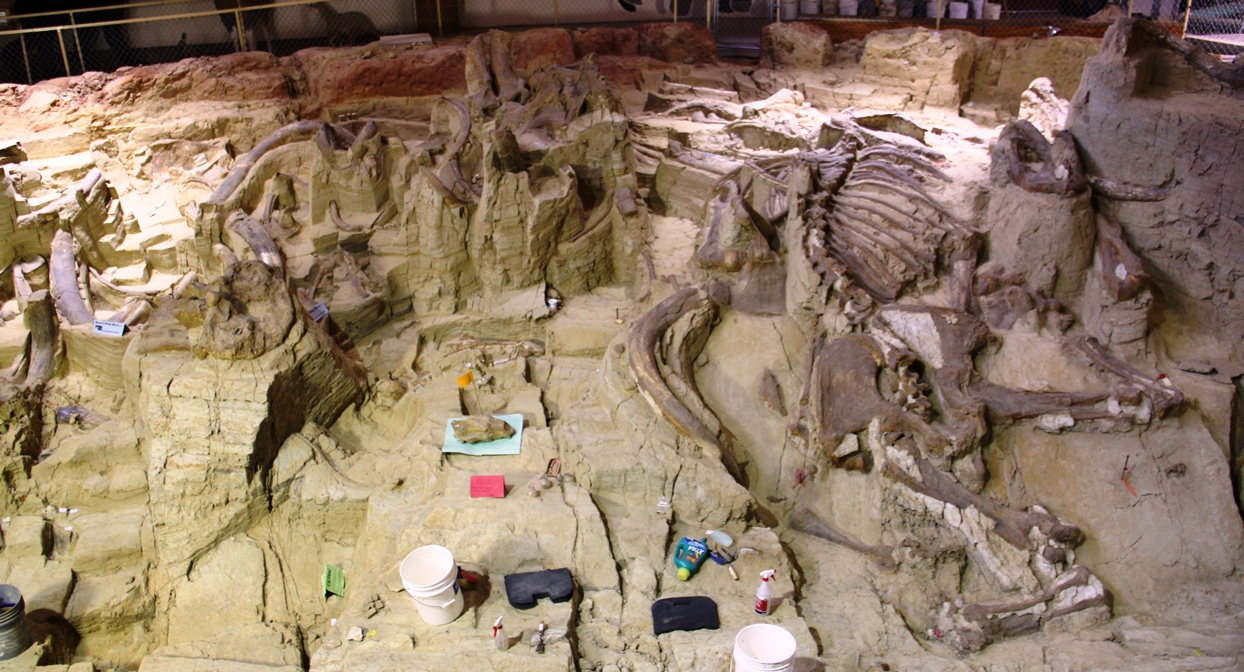 It’s estimated that the excavating will be complete in about twenty years. 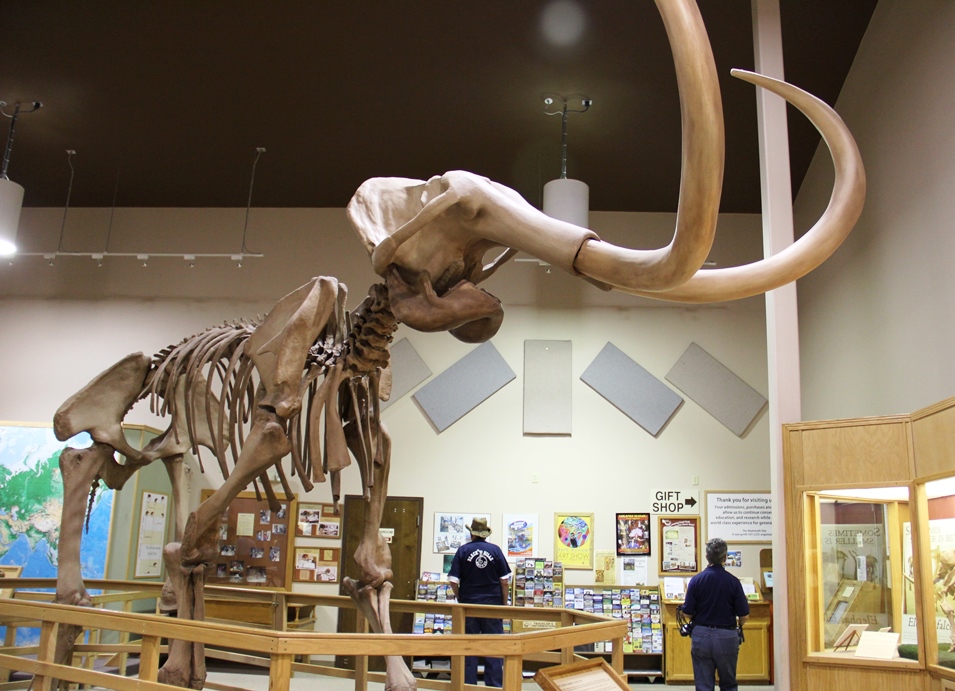 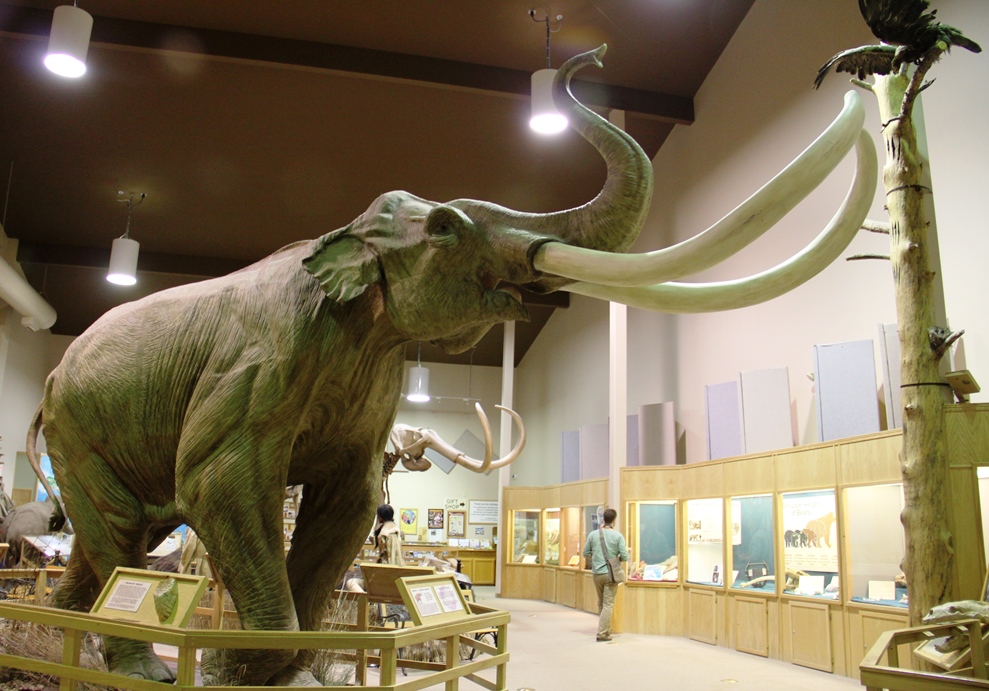 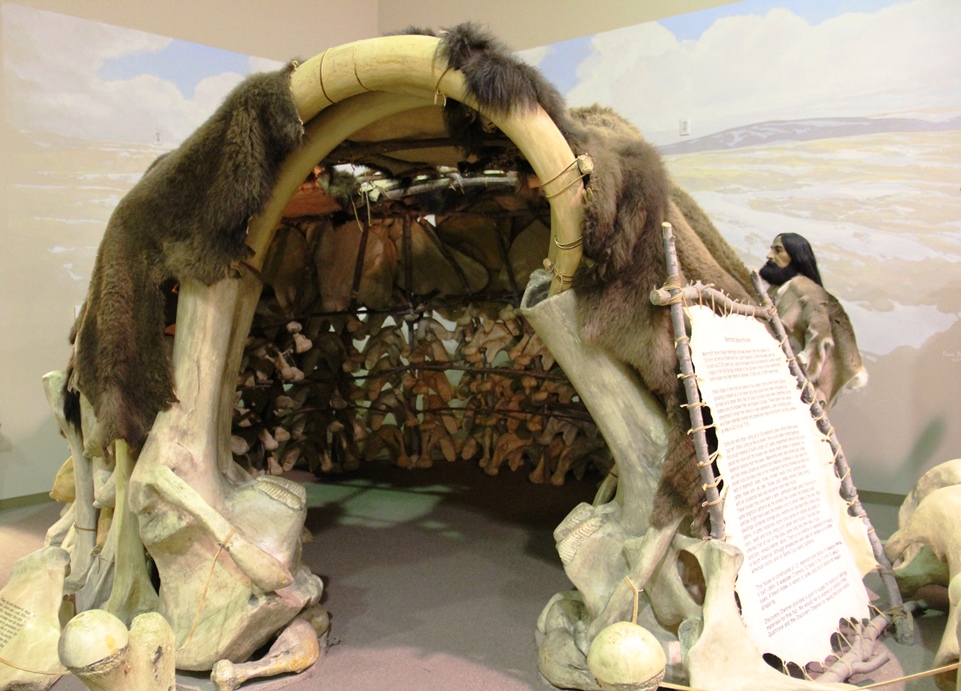 Have you always dreamed of going on an archeological dig? If you’re over 18, you can. Each summer the Mammoth Site offers an opportunity to spend two weeks working in the dig site to excavate and care for the artifacts through the Mammoth Site Excavation and Preservation Program.

If you visit Mammoth Site of Hot Springs

The Mammoth Site of Hot Springs, located at 1800 U.S. 18 Bypass in Hot Springs, is open year-round, seven days a week. Check the “Visit Us” menu on the web site for seasonal hours and admission fees. 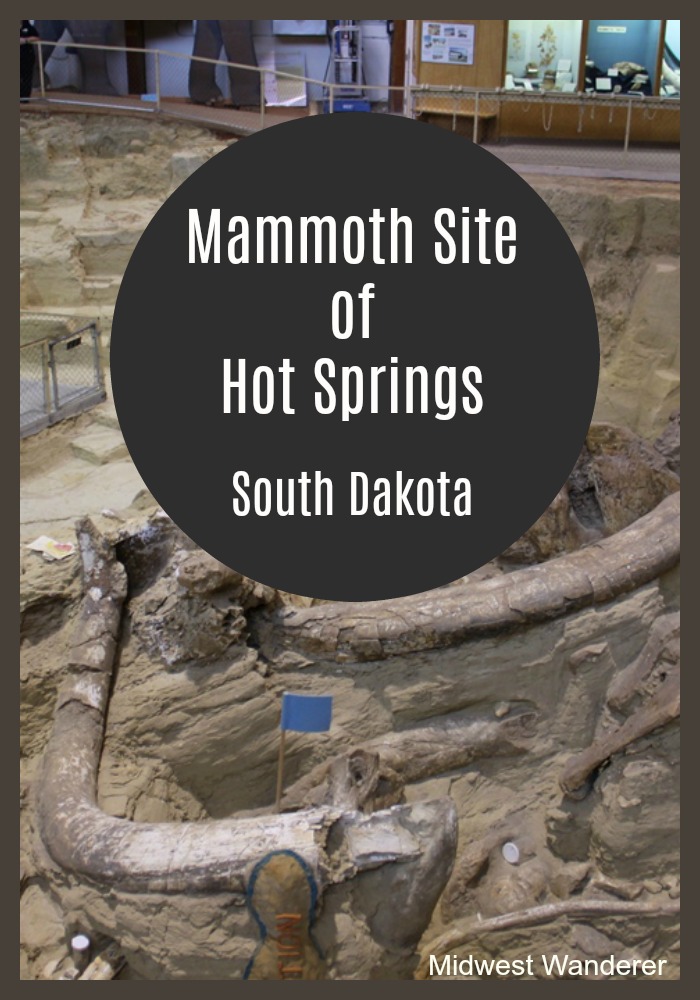 Disclosures: The South Dakota Department of Tourism and the Mammoth Site hosted my visit to the Mammoth Site of Hot Springs. However, all opinions in this article are my own.
This article contains an affiliate link. If you book a room through the “Check rates and reviews” link above, I will receive a small commission, at no additional cost to you.

Thank you for reading Midwest Wanderer. Don’t miss a post. Enter your e-mail address below and click Subscribe. We’ll then notify you whenever we publish another post. Subscription is FREE. After subscribing, be sure to click the link when you get the e-mail asking you to confirm.   – Connie

Before this summer, I knew little about Wild Bill Hickok. Then, within just a few weeks, we visited three places within Kansas and Illinois that all shared Hickok stories—quite a coincidence. I learned several fascinating facts about him. Here are END_OF_DOCUMENT_TOKEN_TO_BE_REPLACED