I can’t tell you how many times we’ve had a short time in a city and wished we could stay longer. Fargo, North Dakota, is one of those cities. We had a week to explore North Dakota, and a single day in Fargo was our starting point.

Because we drove up to Fargo from the Twin Cities following a conference, we didn’t get to our hotel, the MainStay Suites, until almost midnight. Our suite was spacious and comfortable, perfect for an extended stay. Unfortunately, our stay ended eight hours later when we needed to get on the road, so we didn’t have a chance to take advantage of the full kitchen facilities. We did, however, enjoy the complimentary hot breakfast buffet.
Find the best deal, compare prices, and read what other travelers have to say at TripAdvisor

The first stop of the day was the Fargo-Moorhead Visitors Center, where we posed with the woodchipper used in the Fargo movie and browsed the star-studded Celebrity Walk of Fame. 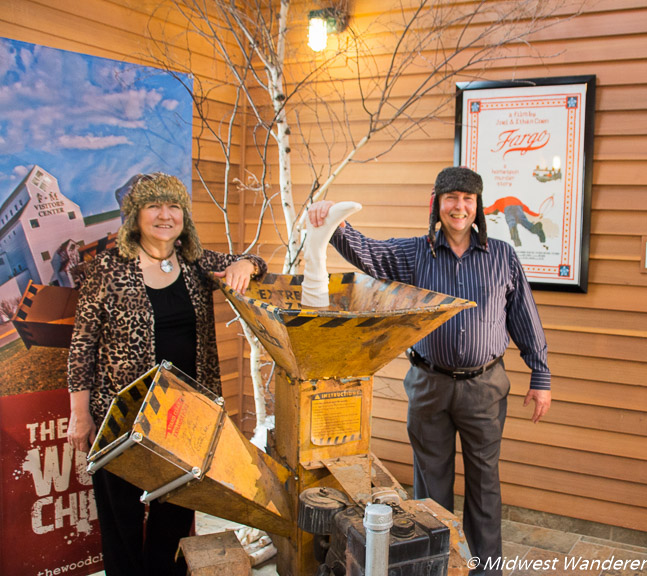 One of Fargo’s own hometown stars was Roger Maris, the New York Yankee famous for hitting “61 in ’61,” that is, 61 home runs in 1961. This broke Babe Ruth’s previous record of 60 homers in a season. Fargo has an entire museum devoted to Maris, albeit a tiny one. The Roger Maris Museum in the West Acres Shopping Center displays trophies and Maris memorabilia in store window style exhibits. An adjacent alcove is fitted with stadium-style seating, where you can watch films about Maris.

Continuing with the sports theme we stopped at SCHEELS, one of the largest sporting goods stores in the world. I was familiar with Bass Pro Shop, Cabela’s, and Gander Mountain but had never heard of SCHEELS. Was I surprised when the first thing I noticed when I walked into the store was a Ferris wheel! Then there were the likenesses of U.S. Presidents scattered about and a small entertainment area complete with a miniature bowling lane and a shooting gallery. There was no way to see the entire two-level, four-acre store in the time we allotted, but we did pick up some fudge in the fudge shop/café before we left. 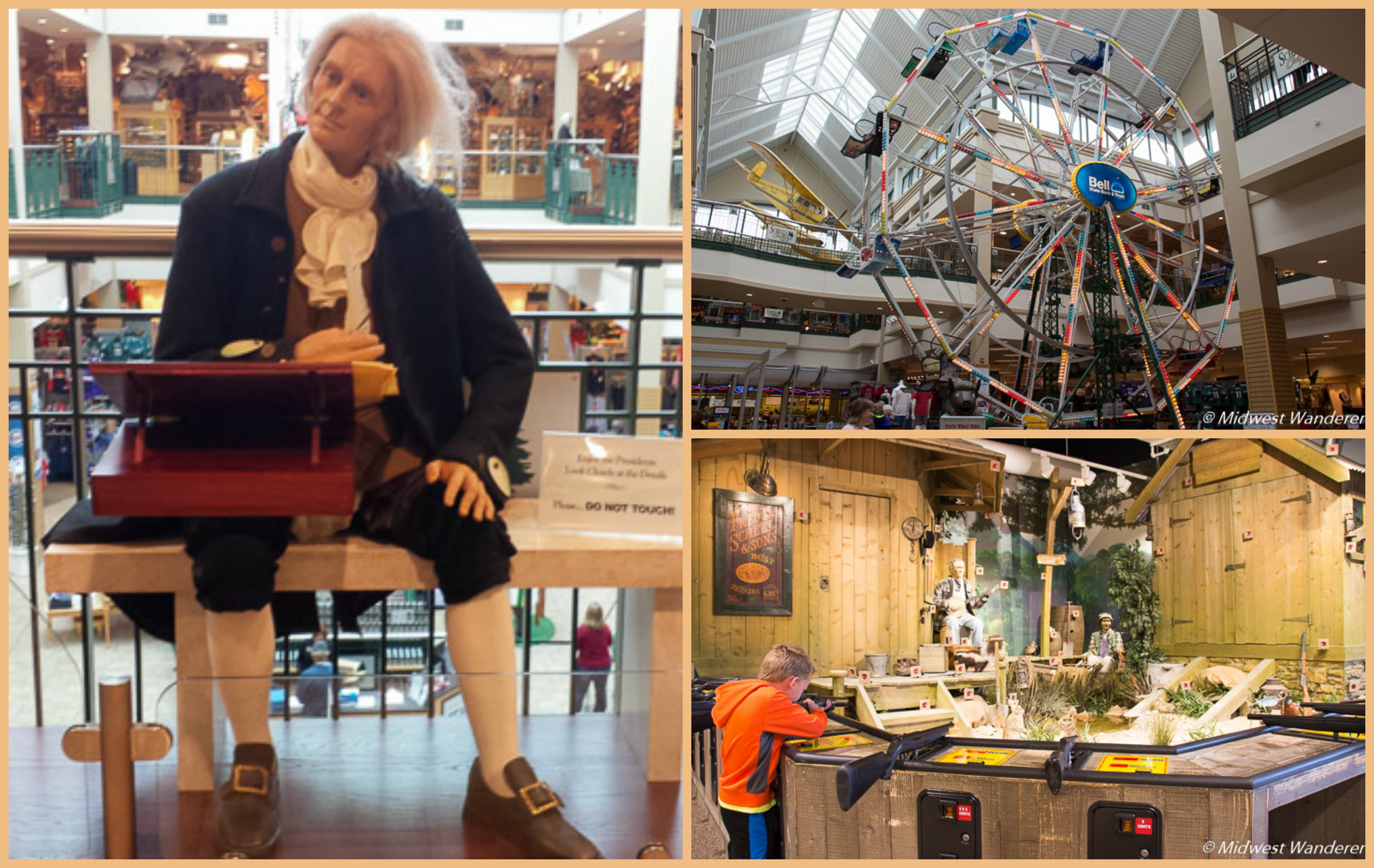 We ate a late lunch Würst Bier Hall. I’m almost embarrassed to say I ordered the smoked Polish sausage in a German restaurant. I made up for my non-German entrée with a side of Spaetzle Mac. Spaetzle Mac is a marriage of two favorites, German dumplings/noodles prepared like mac ‘n cheese. Yum!

After lunch is when we realized we were running short on time. The restored 1926 Fargo Theatre and the Plains Art Museum were next on the itinerary. I wanted to see both and also browse some of the downtown Fargo shops, but we decided to move on in order to see Bonanzaville in West Fargo and still make it to the Maple River Winery in Casselton before the tasting room closed at 5 p.m.

Bonanzaville, run by the Cass County Historical Society, is made up of over 40 historic buildings and includes more than 400,000 artifacts. After browsing exhibits in the main museum, which includes everything from locally-made pottery to a buffalo fur coat, we walked among the four rows of historic buildings that have been moved to the museum site. Buildings range from Fargo’s first home, a log cabin built in 1869, to a former dentist office, with a creepy but interesting display of dentures. 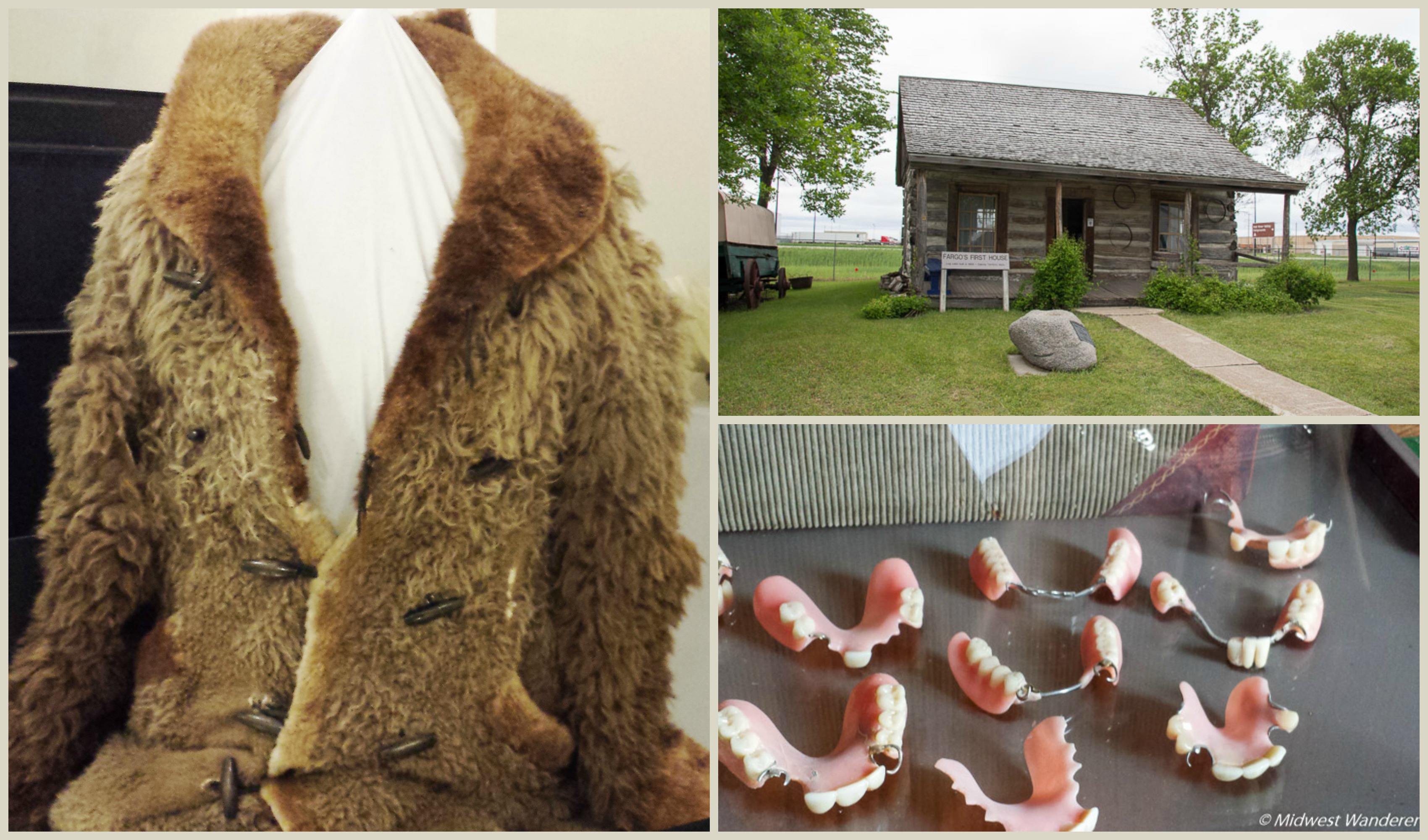 We made it to the Maple River Winery tasting room in Casselton, North Dakota, within fifteen minutes to closing, just enough time to sample a few wine varieties and make a purchase. Maple River wines aren’t made with grapes, but rather with North Dakota fruits like apples, rhubarb and aronia berries. They even produce dandelion wine. Next door to Maple River Winery is the Maple River Distillery, where they produce spirits also made with local fruits, including vodka infused with chokecherry and elderberry brandy. 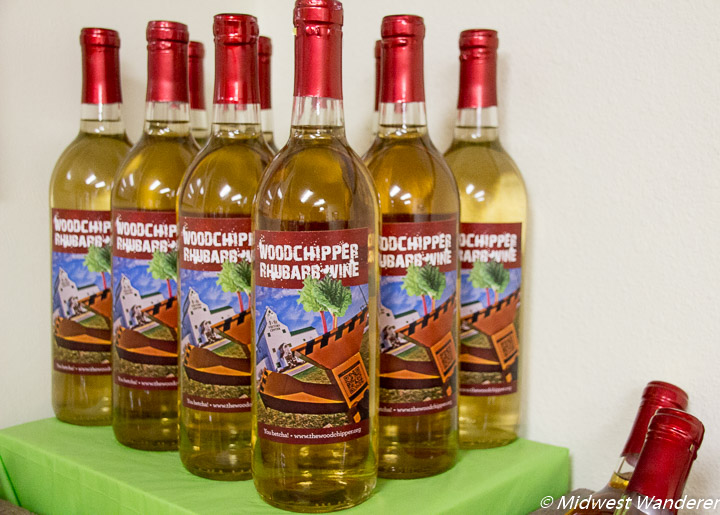 I used to try to “do it all” when I visited a destination. I’ve come to realize that it’s impossible to see everything in one trip. Now when I can’t do all that I had planned, I tell myself I need to leave something for next time. And Fargo is definitely a city I’d like to visit again.

Disclosure: Our road trip through North Dakota was hosted by North Dakota Tourism. Our hotel stay, admission to Bonanzaville and Scheels Ferris wheel ride were complimentary. However, opinions expressed in this article are my own.
This article contains an affiliate link. If you book a room through this link, I will receive a small commission at no extra cost to you.

4 thoughts on “One Day in Fargo, North Dakota”

Before this summer, I knew little about Wild Bill Hickok. Then, within just a few weeks, we visited three places within Kansas and Illinois that all shared Hickok stories—quite a coincidence. I learned several fascinating facts about him. Here are END_OF_DOCUMENT_TOKEN_TO_BE_REPLACED