In the late 1800s, huge natural gas fields were discovered beneath Kokomo, Indiana. The gas supply was thought to be infinite. As a result, manufacturing boomed in the city, particularly in the glass and automotive industries. During our stay in the area, we visited five Kokomo attractions that reflect those two industries. We learned why the glass and automotive industries, in particular, became prevalent in Kokomo.

As it turned out, the natural gas fields didn’t provide Kokomo an infinite supply of gas after all. With glass factories running 24/7, Kokomo residents using free gas, and the city selling gas to Chicago, the gas pressure decreased and finally stopped. Most glass factories closed, but the automotive industry actually increased. Here’s how it all played out.

The reason glass factories were so popular in Kokomo was that the two key ingredients were close at hand. The furnaces used in glass making used a lot of gas, and the city lured the manufacturers with the promise of free gas. The second ingredient, sand, was plentiful along Indiana’s Lake Michigan shoreline. Kokomo Opalescent Glass was just one of many glass companies to settle in Kokomo. One record shows there were as many as 110 glass factories in the Kokomo area in 1900.

However, Kokomo Opalescent Glass is the only one still in business today. In fact, having started in 1888, it’s the oldest art glass company in the United States, and possibly the oldest in the world. What they make is sheets of colored glass, the type used in stained glass windows.

You can watch them make the glass when you take the factory tour. See workers ladle molten glass from the 12-ton, 2500-degree Fahrenheit furnace to the table. Another worker mixes the taffy-like substance and pushes it onto a belt. The molten glass presses between two rollers, which flatten the glass to an eighth-inch thickness. 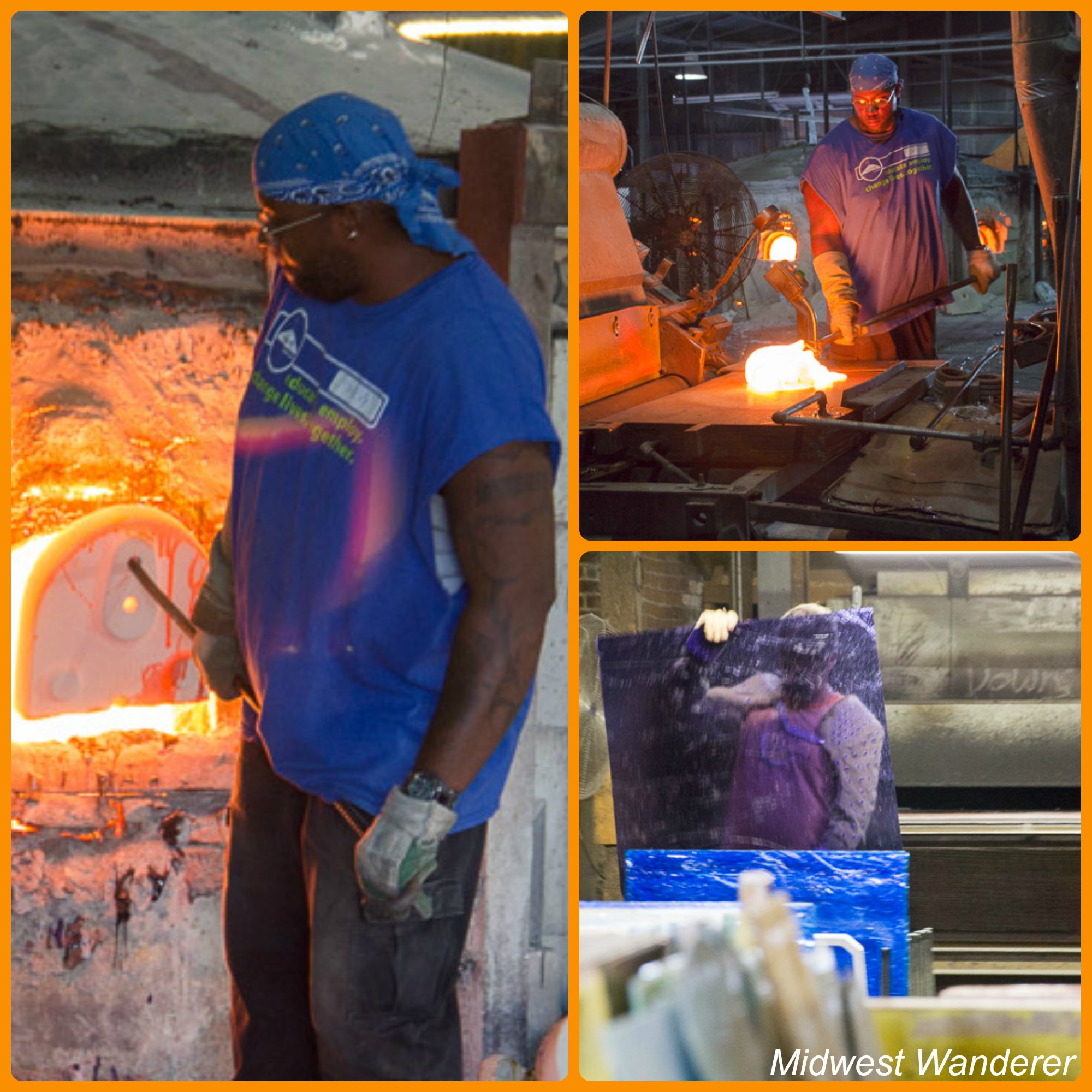 The Greentown Glass Museum, located about ten miles east of Kokomo in Greentown, Indiana, pays tribute to the Greentown Tumbler and Goblet Company. The former glass factory started out producing plain, everyday glassware. However, the company evolved into making colored, patterned glassware and expanded from only tableware to include novelty items, as well.

One of the glass chemists, Joseph Rosenthal, invented chocolate glass. Chocolate glass is like milk glass, the white glass commonly produced at the time, but is the color of milk chocolate. He also invented colors like golden agate, white agate, and rose agate. Today only three known pieces of rose agate are known to exist, and the museum owns one of them. These unusual glass colors were a huge hit and gained extreme popularity. The glass factory, which had grown to 300 employees, was running 24/7 to keep up with demand. And then fire struck.

The fire occurred during the lunch hour, when no one was in the building. Windy conditions fanned the flames, quickly igniting the building’s dry timbers and the straw used to pack the glass. Indiana Tumbler and Goblet Company was a total loss and did not rebuild. Now that the city’s sole employer was out of business, former employees left the area. Within days Greentown was almost a ghost town.

Greentown Glass Museum exhibits include collections of the beautiful Indiana Tumbler and Goblet Company colored, patterned glassware, including cobalt blue, Nile green, and chocolate glass. A old glass press is also on exhibit. The glass press was found in terrible shape in another former glass factory. It took four years of disassembling slowly and meticulously, reconditioning, and rebuilding it to get it back in shape.

The way the glass making process worked, a gatherer retrieved the molten glass from the furnace, brought it to the press, and dropped it into a mold. The press operator pulled down the handle to press the glass into whatever product they were making that day. A press operator earned $1.25 for each four-hour shift, provided he met the quantity and quality requirements. So for two four-hour shifts, with an hour lunch break, a press operator made $2.50 a day, which was good money back then. 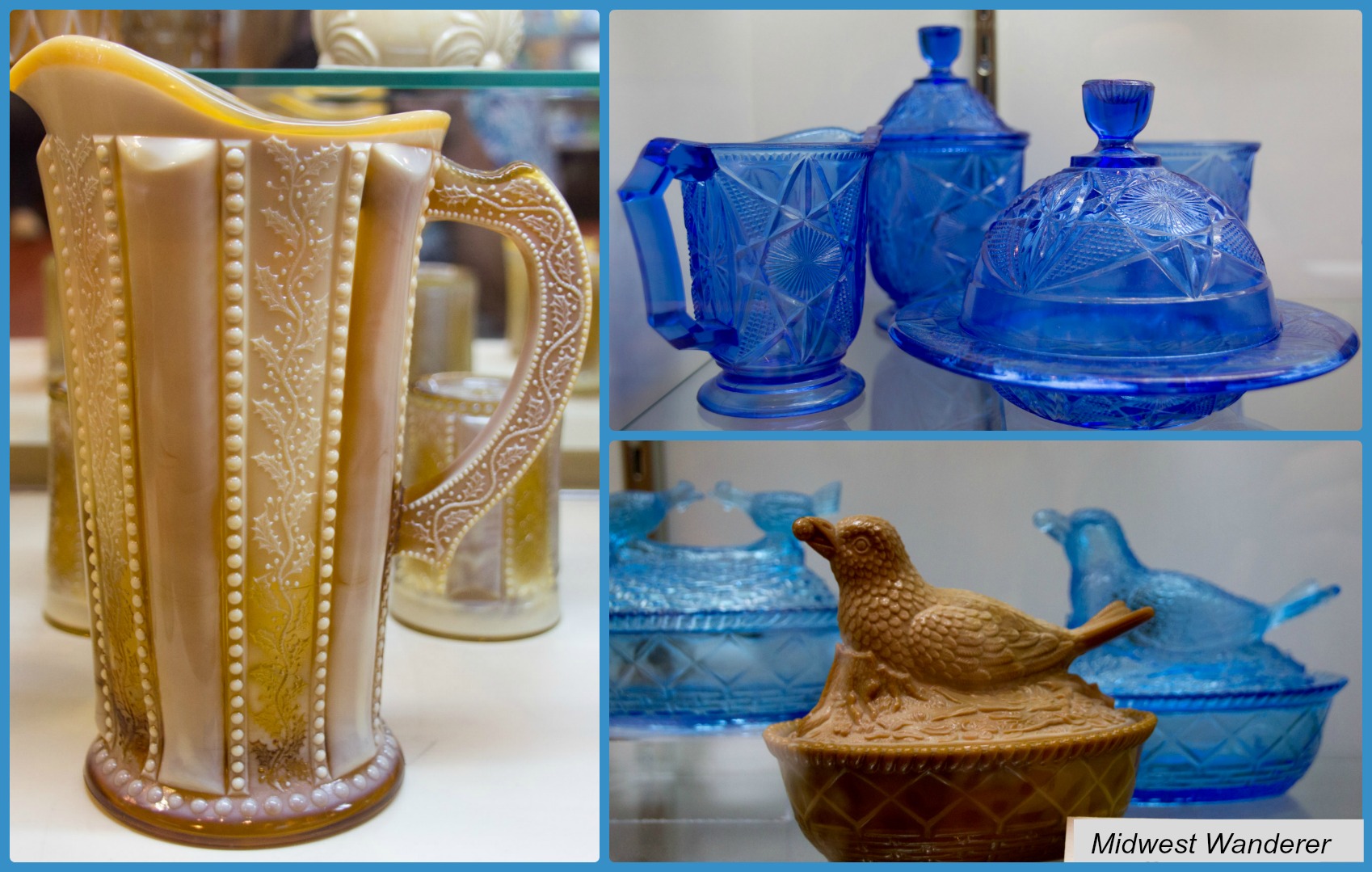 The offer for free gas and free land also lured Monroe Seiberling, an industrialist from Ohio, to Kokomo. Seiberling started out making cardboard from straw. The cardboard was used for shoe boxes and hat boxes.

Within a couple of years, however, Seiberling also got into glass production. He built the largest and most sophisticated glass plant in the United States. His company produced ten-foot sheets of glass, which were in demand for new buildings being constructed in Chicago following the Great Chicago Fire.

While he was building the glass factory, he also built his home, a three-story Romanesque Revival mansion. He ordered a different type of wood for every room. Carved wood, stained glass (from Kokomo Opalescent Glass), and even patterned door hinges were some of the intricate details in the mansion. In 1891, two years after starting home construction, at a cost of $50,000, the Seiberling family moved into the home.

Four years later the Seiberlings moved out. Monroe Seiberling started other companies in Peoria, Illinois, and another glass factory in Ottawa, Illinois. 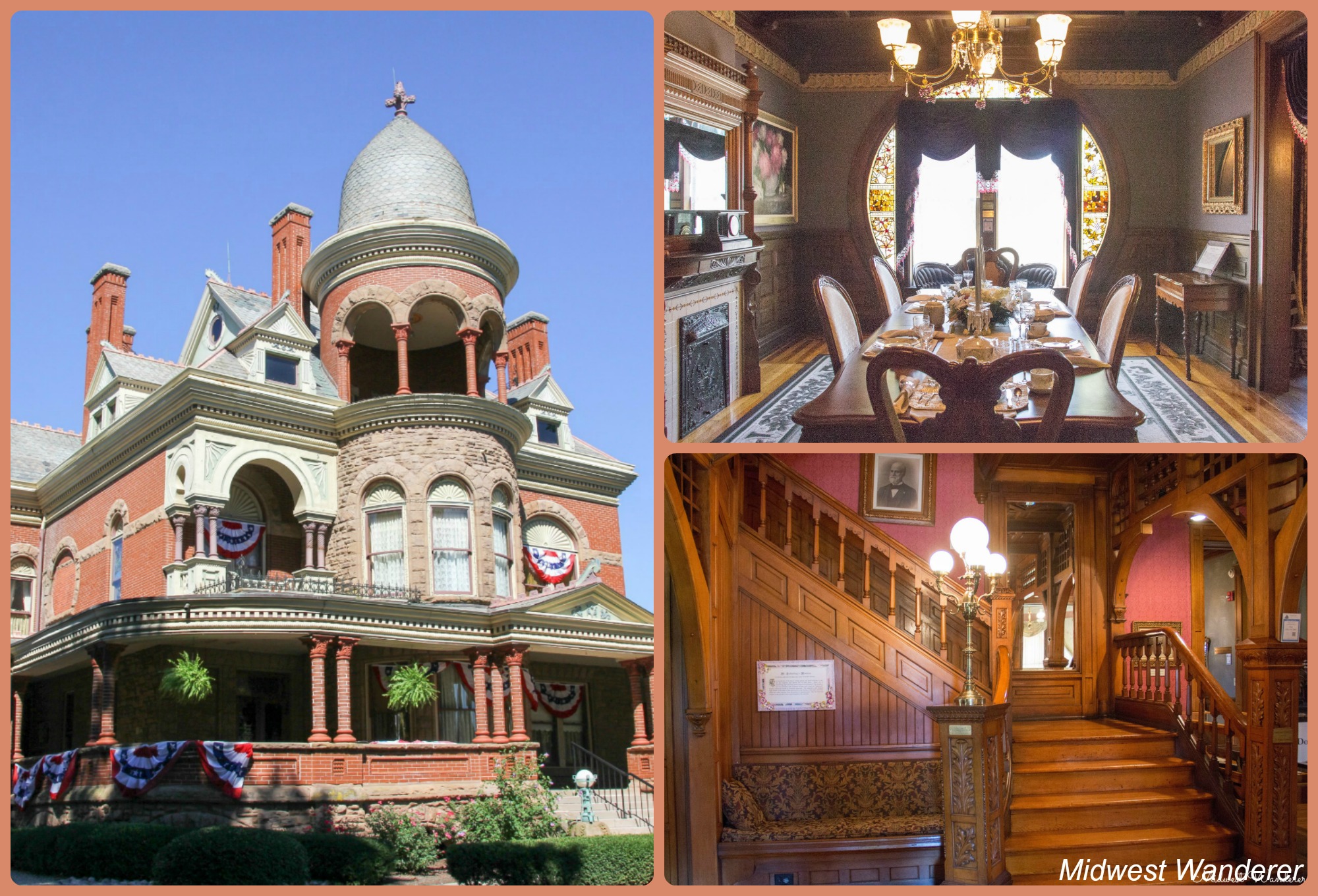 Elwood Haynes, a metallurgist by trade, was a field superintendent in the newfound Indiana gas industry. He needed a way to get from field to field, so he invented a horseless carriage. He hired Edgar and Elmer Apperson to build the car he designed. The three men joined forces and formed the Haynes-Apperson Automobile Company and started manufacturing the first commercially-produced automobiles in the United States. It was just the beginning of the automotive industry in Kokomo.

The Apperson brothers split from Haynes three years later, forming two separate companies. Haynes left the automobile manufacturing in the hands of employees, while he continued in a metallurgy business. He is credited with perfecting stainless steel and inventing Stellite, the strongest known metal alloy.

Haynes Automotive closed after Elwood’s 1925 death. However, Haynes International is still in business today. The company is one of the world’s largest in high-performance nickel- and cobalt-based alloys.

The Elwood Haynes Museum is housed in Haynes’ former home. Here you’ll see a 1905 Haynes Model L, complete with the first tilt steering wheel, as well as a collection of Haynes’ inventions and possessions. 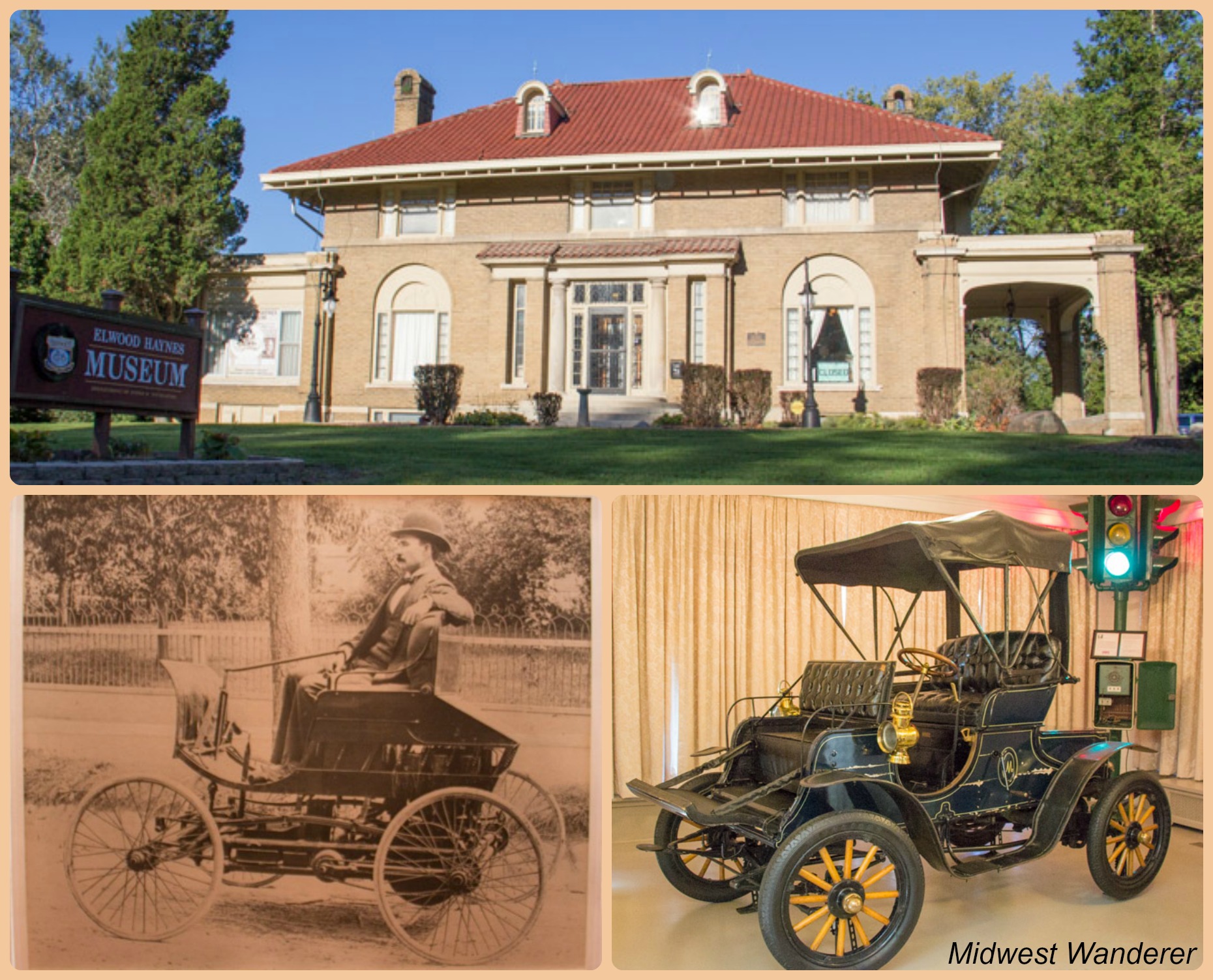 Once Kokomo’s natural gas supply depleted, the glass companies abandoned their factories. The city was left with empty factories and unemployed skilled laborers. The combination was perfect for the growing automotive industry.

Besides Haynes and Apperson, other automobiles were manufactured in Indiana. Over 40 Indiana cities boasted auto manufacturing. Most of the smaller companies went out of business during the Great Depression. However, Auburn, Cord, and Duesenberg are among those that lasted through the 1930s. The Studebaker Company, which produced its first car in 1901, lasted in Indiana until 1963.

The Kokomo Automotive Museum focuses on Indiana-manufactured cars and highlights those made in Kokomo: Hayes and Apperson. The museum houses about a hundred cars in total. Although the museum owns some of the cars, many are on loan, so on each visit you may see some different cars. 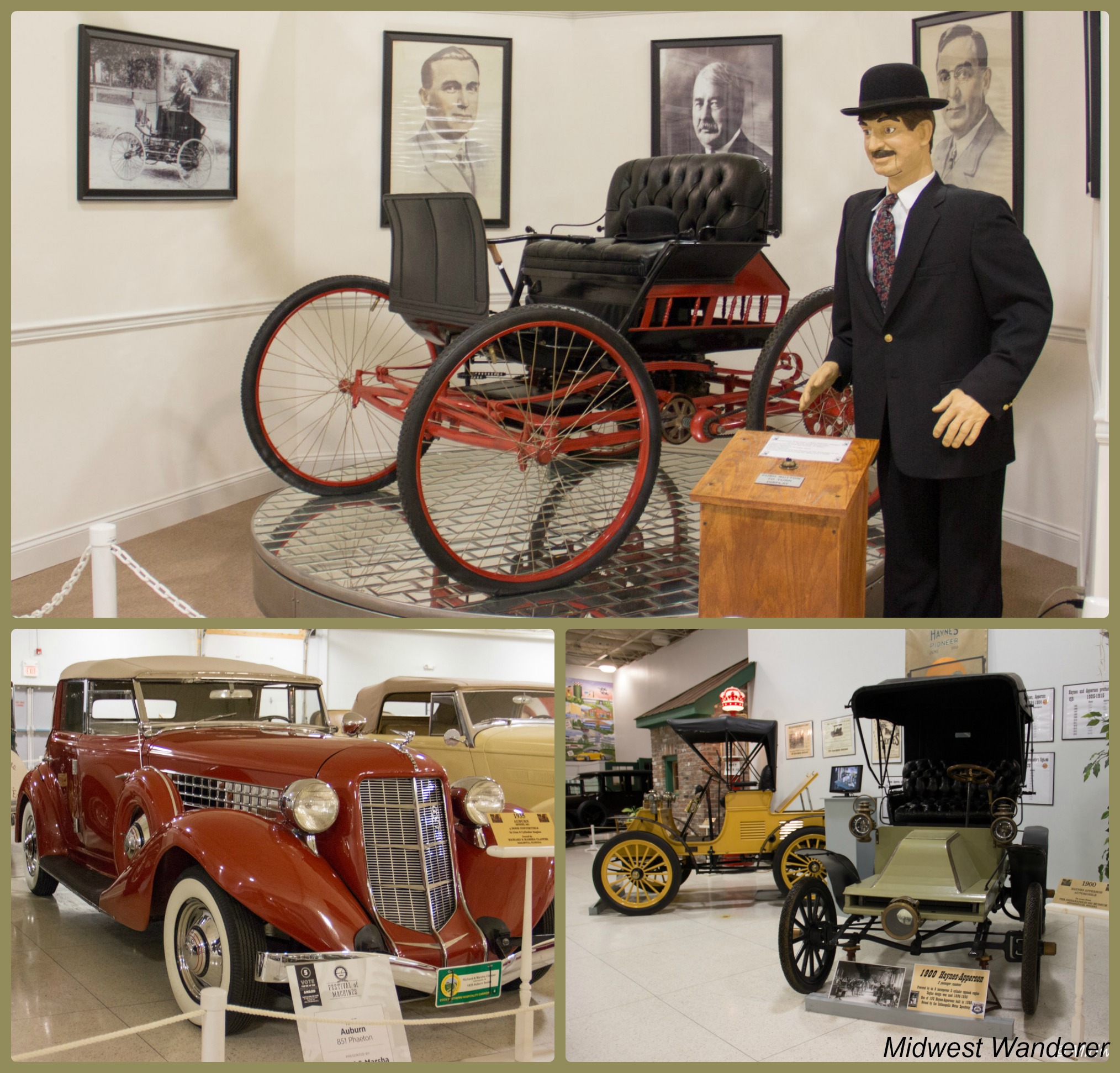 Today there is only the one glass factory left in Kokomo, and no complete automobiles are manufactured in the city. However, both Chrysler and GM still have manufacturing facilities there. As we see cities across the United State declining due to manufacturing moving overseas, that isn’t the case with Kokomo. I was pleased to see that many manufacturers are still located there, which of course, spurs other businesses. In addition to the Kokomo attractions listed in this article, the city offers great restaurants, shops, parks, and more, making a great getaway destination.

What Kokomo attractions have you visited? Let us know in the Comments section below.

We stayed at Courtyard Kokomo during our stay in Kokomo. Check rates here. 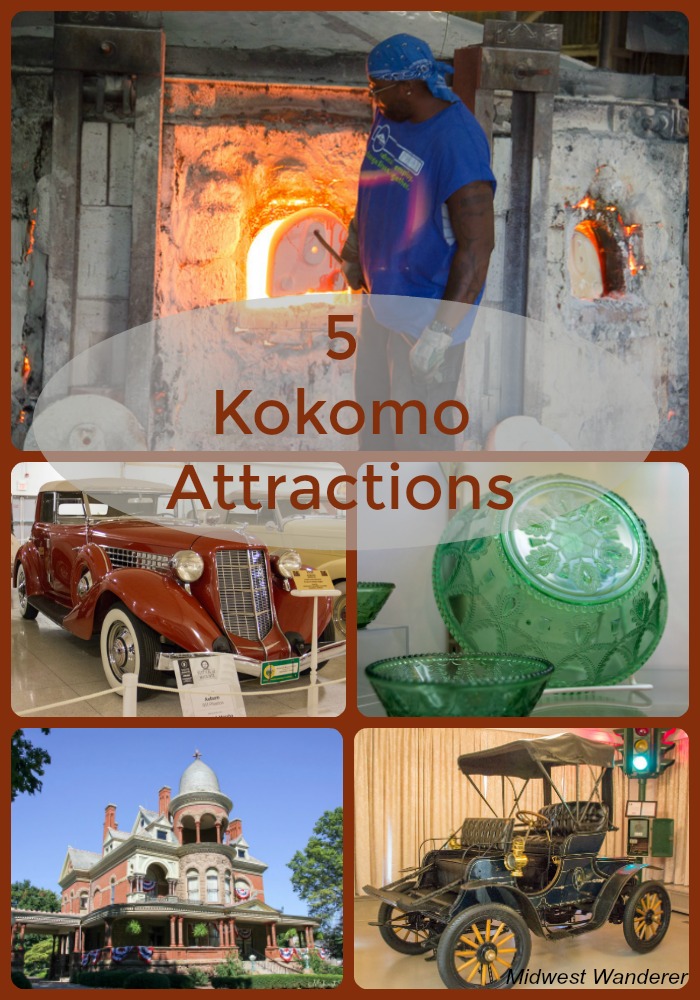 Disclosures: The Greater Kokomo Visitors Bureau hosted our visit to Kokomo. Our admissions to these Kokomo attractions were complimentary; however, any opinions expressed in this article are my own.
This article contains an affiliate link. If you book a hotel room through this link, I will receive a small commission at no additional cost to you.

Before this summer, I knew little about Wild Bill Hickok. Then, within just a few weeks, we visited three places within Kansas and Illinois that all shared Hickok stories—quite a coincidence. I learned several fascinating facts about him. Here are END_OF_DOCUMENT_TOKEN_TO_BE_REPLACED