Last fall we visited League Stadium in Huntingburg, Indiana. League Stadium is where the 1992 hit movie A League of Their Own, starring Tom Hanks and Geena Davis, was filmed. Today the Dubois County Bombers summer collegiate baseball league team plays in the stadium. However, our 2016 visit was post-season. The college players had gone back to school. The Rockford Peaches and Racine Belles from the movie were long gone. Even the vintage billboard signs had been taken down for maintenance. As I stood in the stands, I could only imagine a baseball game being played in the retro-style League Stadium.

This summer my imagined game became reality. Not only did we see the Dubois County Bombers play; it was also the 25th anniversary of A League of Their Own. The Rockford Peaches played a “rematch” game against the Racine Belles. In fact, Bitty Schram, the actress who played the Rockford Peach who cried during the game, came back for the anniversary celebration. Following the rematch game, we stayed for a Dubois County Bombers regular season game.

On this year’s visit to League Stadium the vintage billboards were back in place. Uniforms were back in the movie set lockers. And the packed stands brought life to the retro stadium. 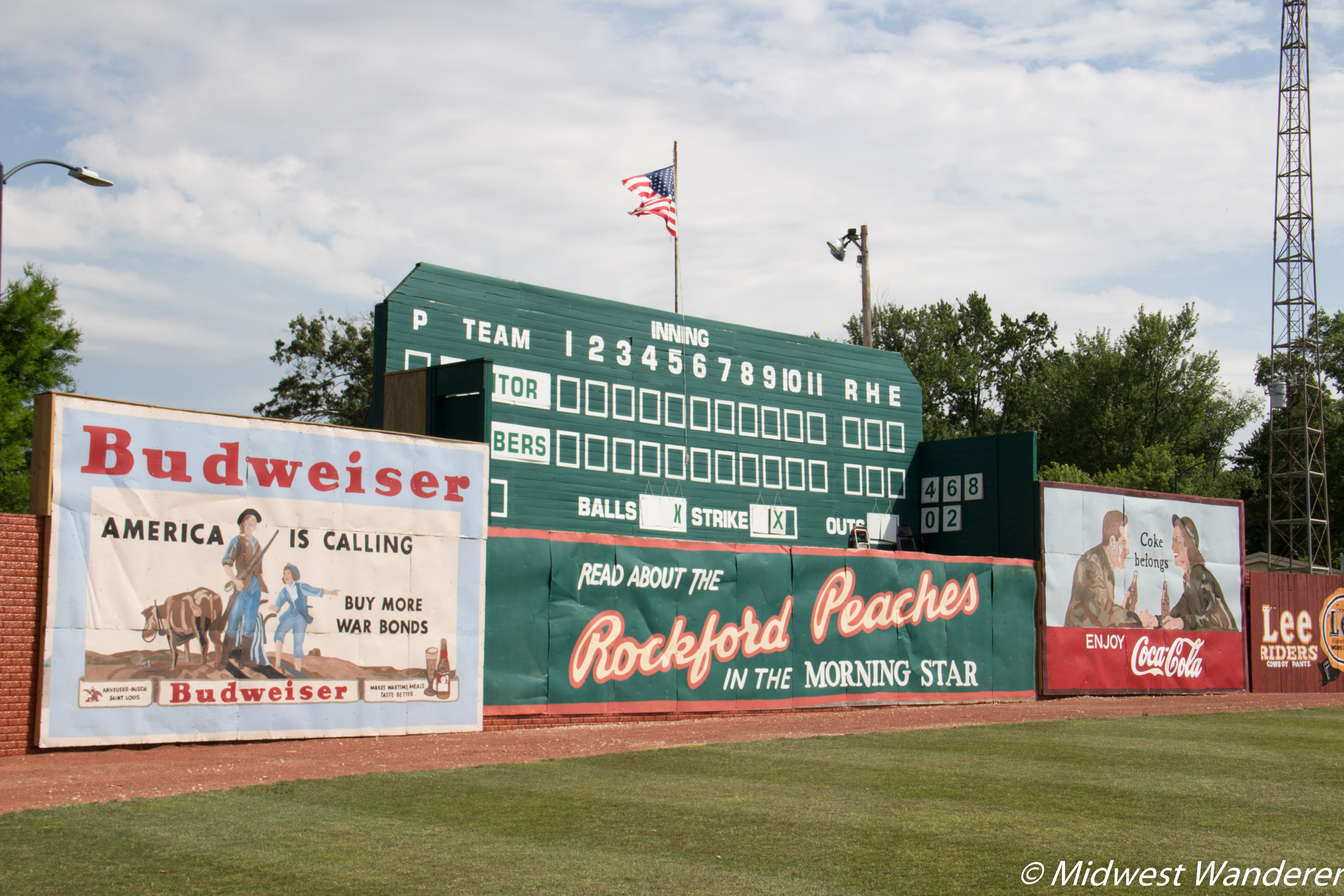 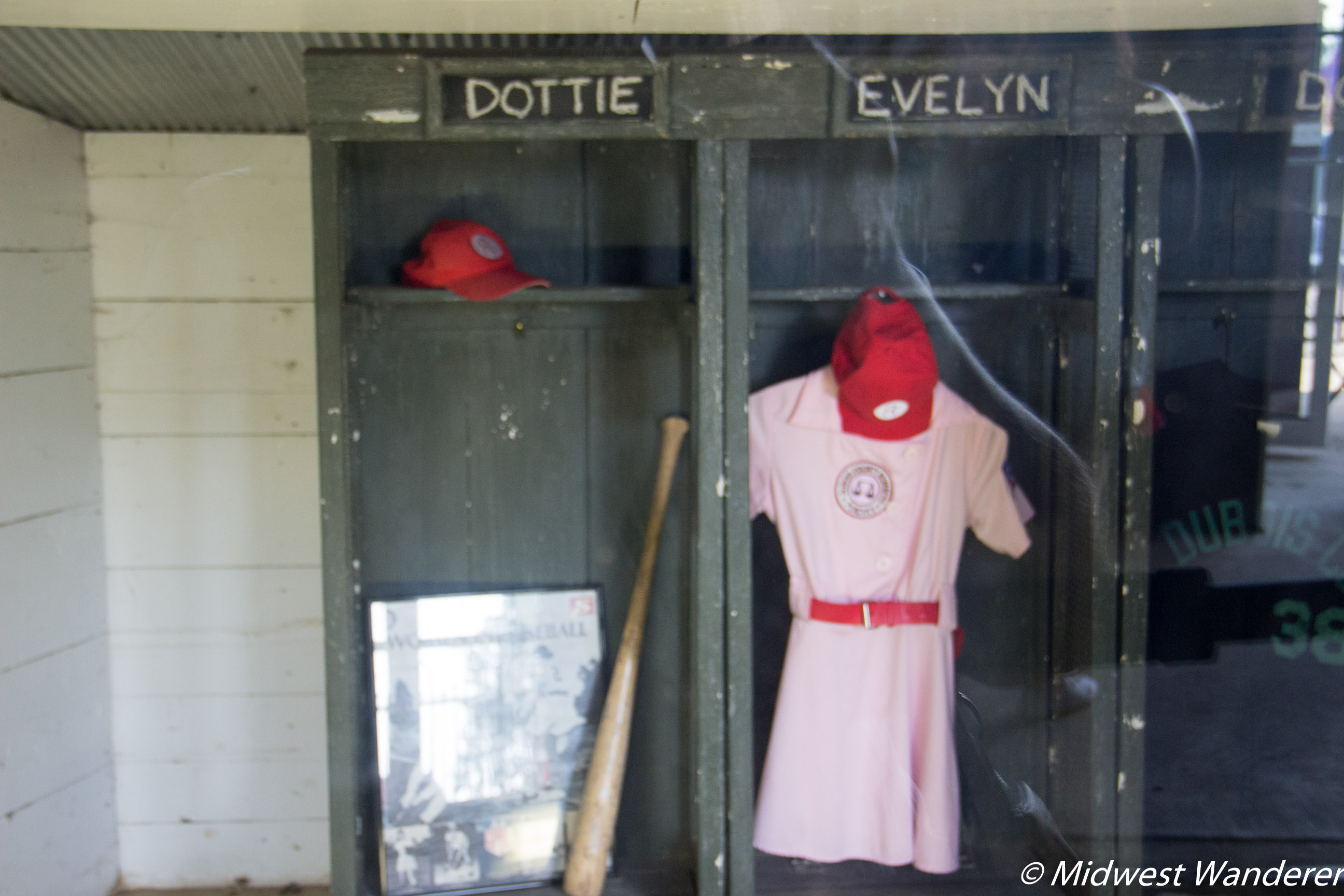 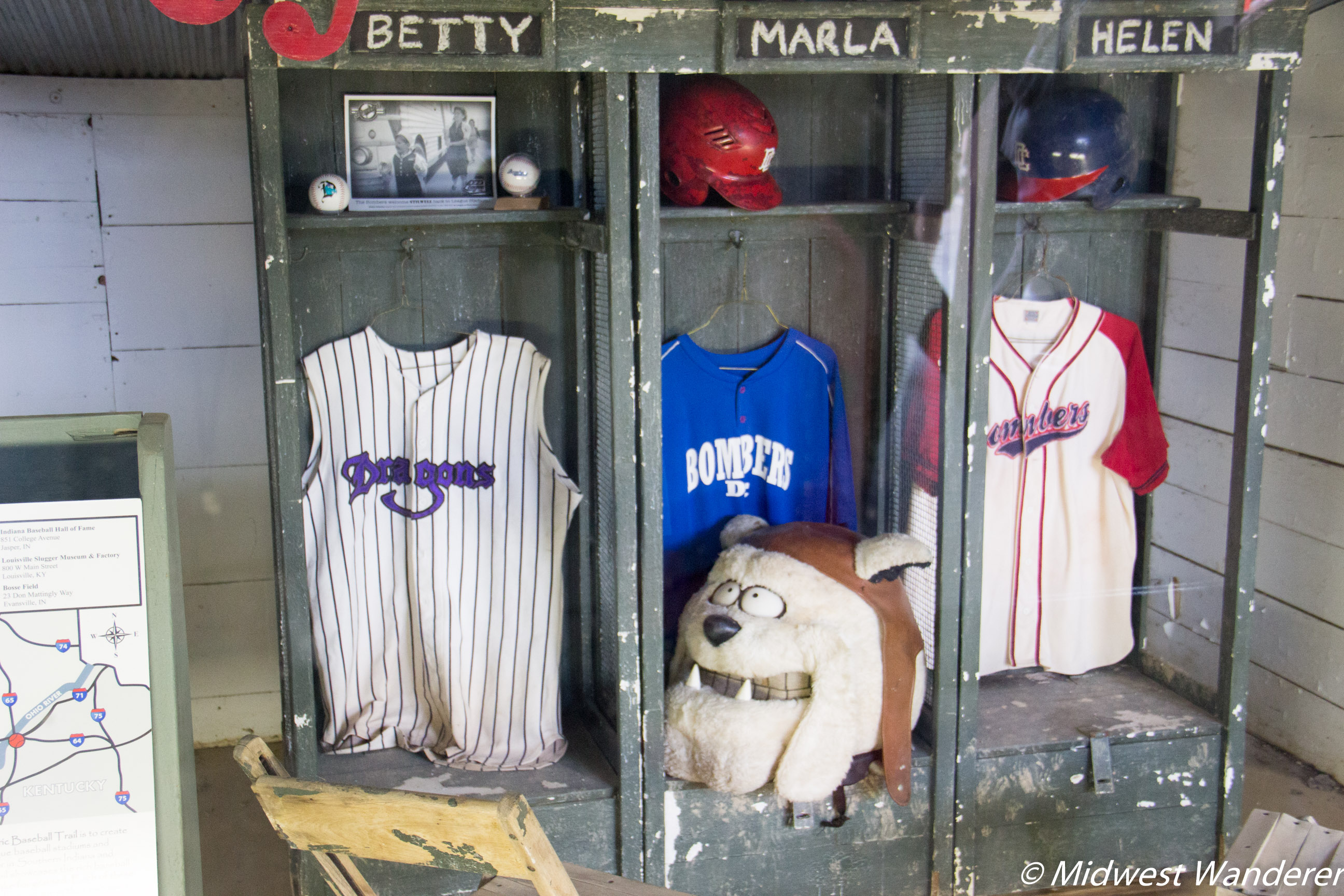 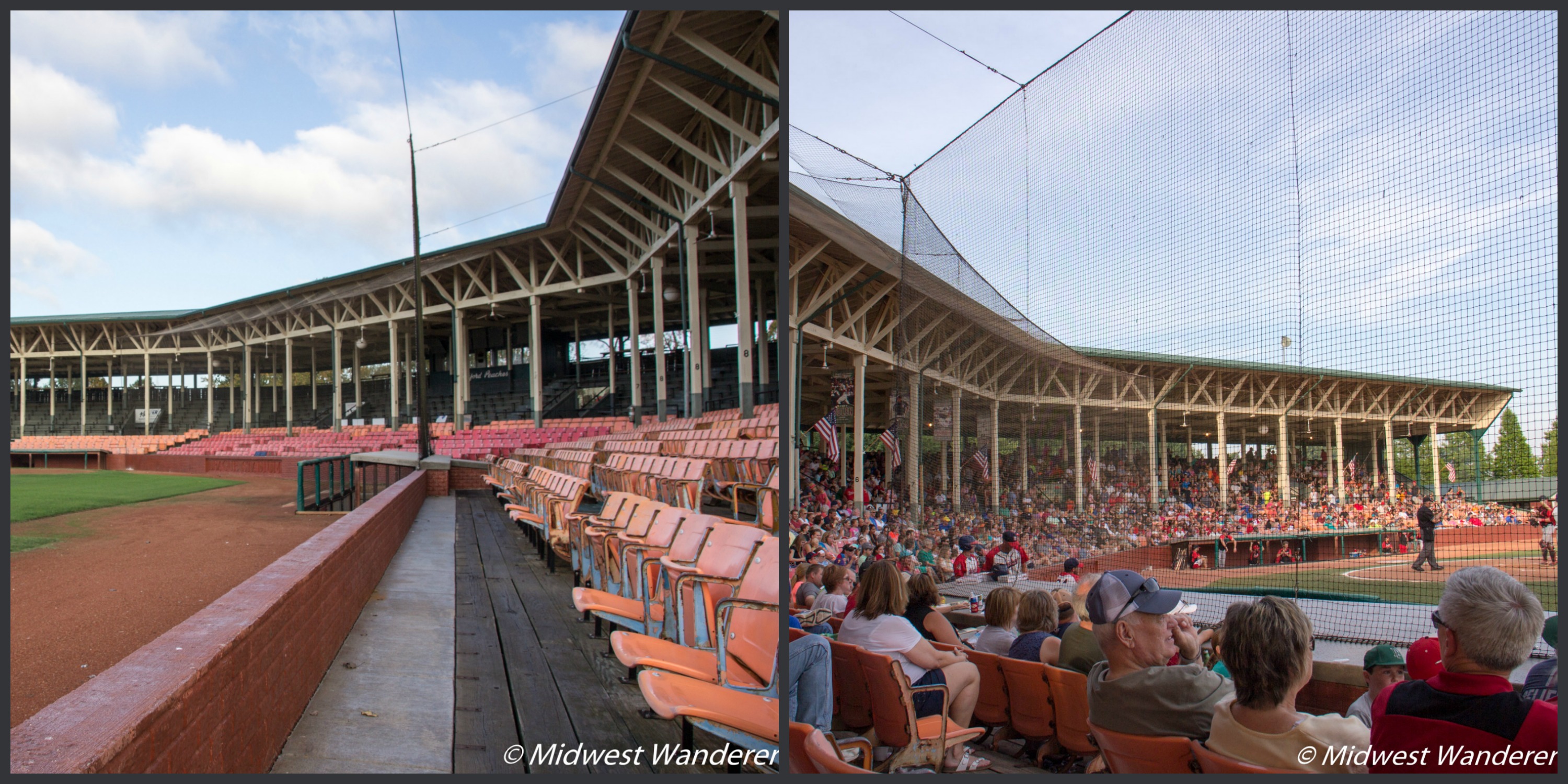 Fun fact: League Stadium, an $800,000 project, is the largest prop ever built and left behind at the end of a movie filming. 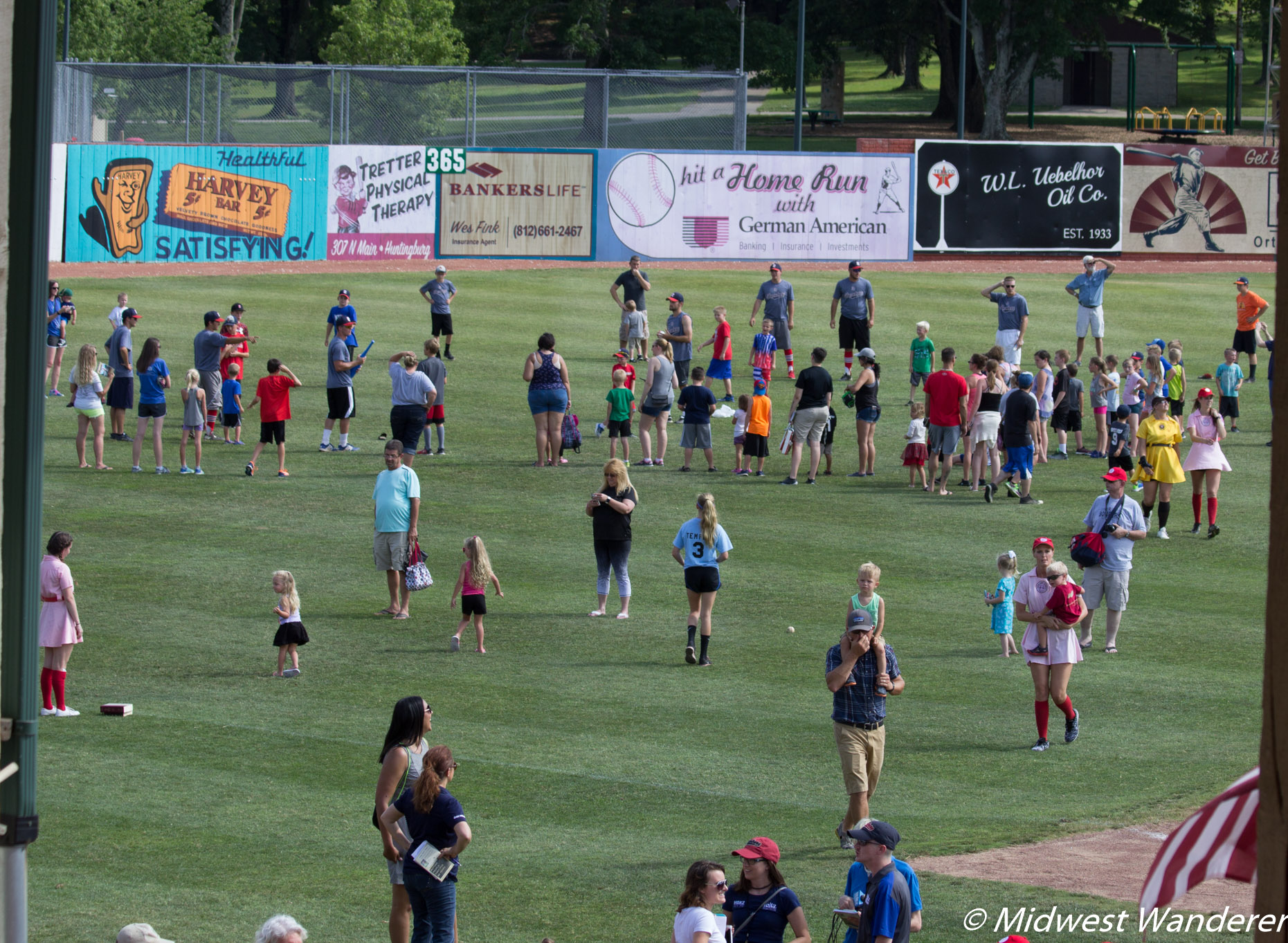 In A League of Their Own, the final World Series game was against the Racine Belles. The Racine Belles won that game. Now, 25 years later, the Belles took an early lead, and it stayed that way throughout most of the game. It looked like the Belles would win again. But late in the game, the Peaches rallied and tied. The game ended at 8-8. 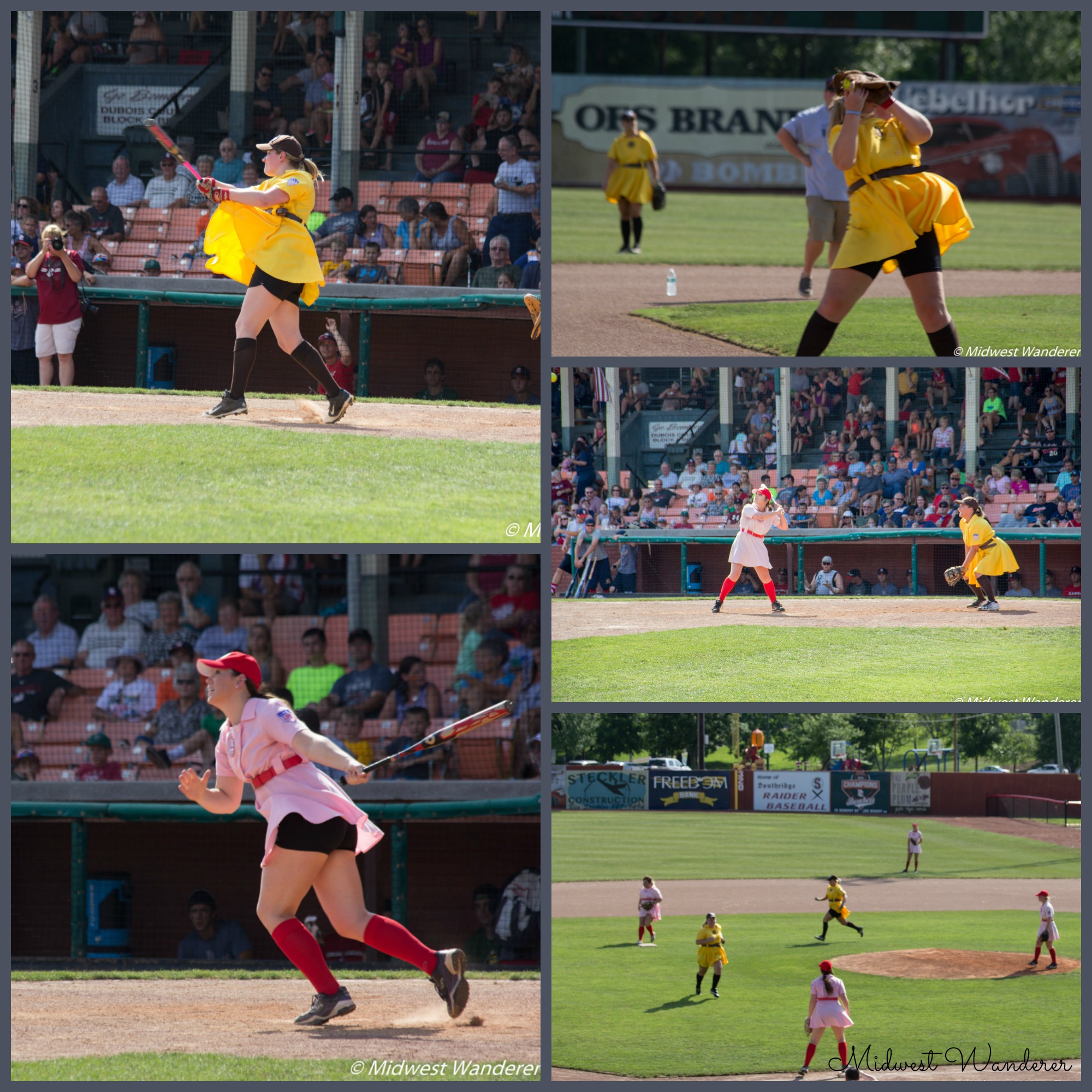 Although there had been quite a crowd for the A League of Their Own 25th anniversary celebration, it seemed to me the stadium got even more crowded for the Dubois County Bombers game. The team has quite a following. And in 2017 they ended the season as champions of the Ohio Valley Summer Collegiate Baseball League.

Although the Peaches don’t play regular games at League Stadium, they cheer on the Dubois County Bombers at every home game. At League Stadium, every night is Throwback Night. How fun it is to take a step back in time in the retro 1940s stadium that Hollywood left in Huntingburg.

If you visit League Stadium

During our visit to Huntingburg we stayed at the Hampton Inn Jasper. Check hotel rates.

Disclosures: Visit Dubois County hosted our visit to League Stadium and the “League of Their Own” 25th anniversary celebration. However, any opinions expressed in this article are my own.
This article contains affiliate links. If you book a room through the “Check hotel rates” link above , I will receive a small commission at no additional cost to you.

Before this summer, I knew little about Wild Bill Hickok. Then, within just a few weeks, we visited three places within Kansas and Illinois that all shared Hickok stories—quite a coincidence. I learned several fascinating facts about him. Here are END_OF_DOCUMENT_TOKEN_TO_BE_REPLACED