Last summer we headed to Elkhart County in northern Indiana to travel the world’s only quilt gardens driving tour. The quilt gardens are intertwined with the area’s Heritage Trail, so we essentially took two driving tours simultaneously. The drive takes you along city streets and country roads in both Elkhart and LaGrange Counties, passing through seven cities and towns, including Nappanee and Shipshewana, the heart of Amish Country. 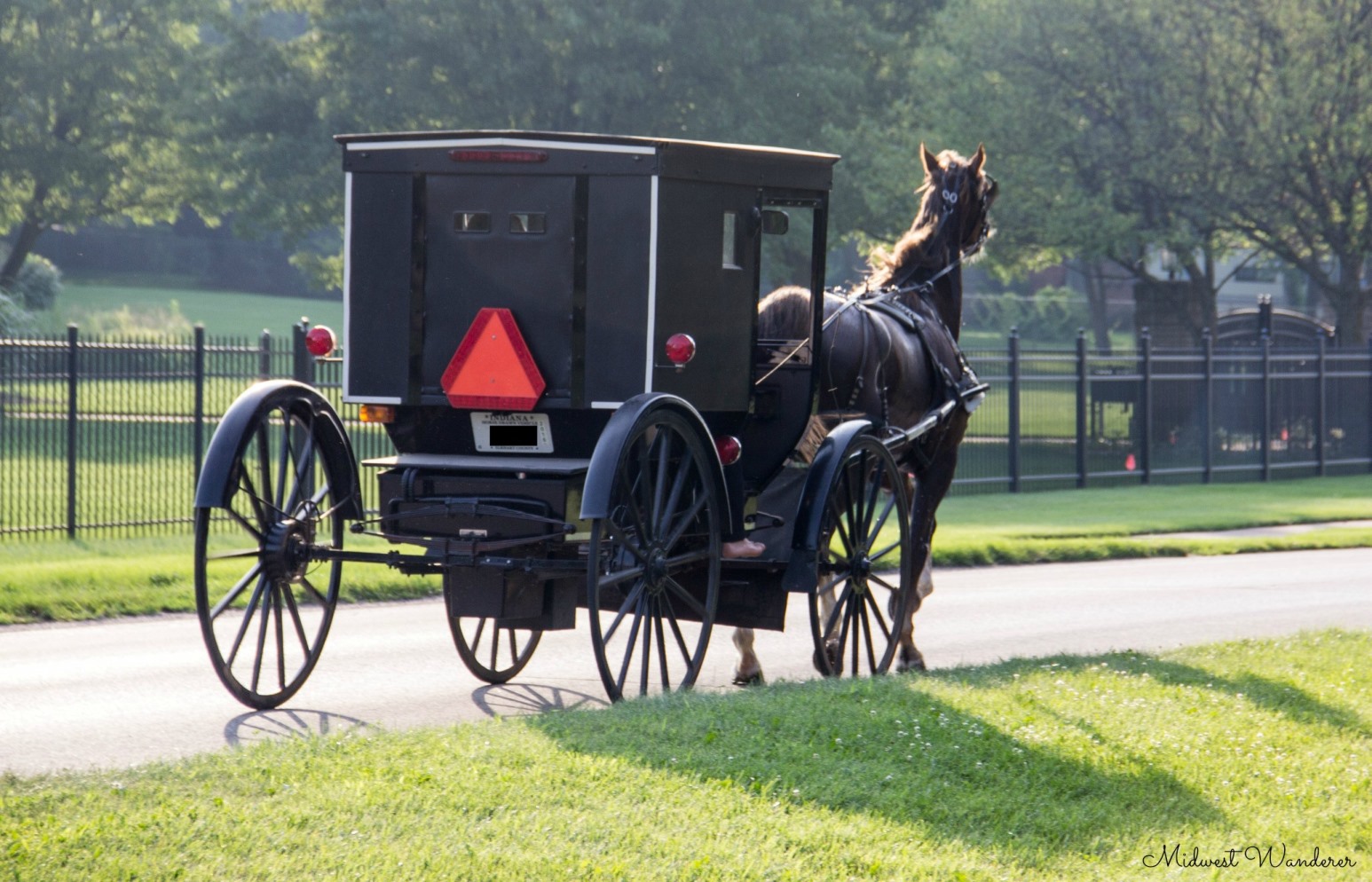 A CD with the narrated Heritage Trail Driving Tour was waiting for us at our B&B, but you can get the free CD at the Elkhart County Visitor Center. If you’d prefer, you can download the MP3 files from the Elkhart County CVB web site to your smart phone or other device. While you’re at the visitor center, also pick up a Quilt Gardens Tour map.

The narration begins from the Elkhart County Visitor Center, but you can change to another CD track if you start from another location. We started the tour in Bristol, since we were staying at the Murphy Guest House in that town.

The building that houses the Elkhart County Historical Museum was originally Indiana’s first consolidated school. Built in 1903, the school combined eight one-room schools. We didn’t get a chance to go inside the museum, since it was after hours when we started the Heritage Trail tour. We did, however, take a photo of the quilt garden in front of the museum.

Down the road, and next to the B&B where we stayed, a marker commemorates the Underground Railroad and specifically, an 1847 incident. Three slave hunters from Kentucky broke into a home to try to capture a fugitive slave living in Bristol. The three men were convicted of causing a riot, and the fugitive slave fled. However, the Indiana Supreme Court later reversed the decision that found the men guilty based on an earlier U.S. Supreme Court ruling.

Continuing on, you’ll see the Bristol Opera House, built in 1897. The building is now home to the Elkhart Civic Theatre. 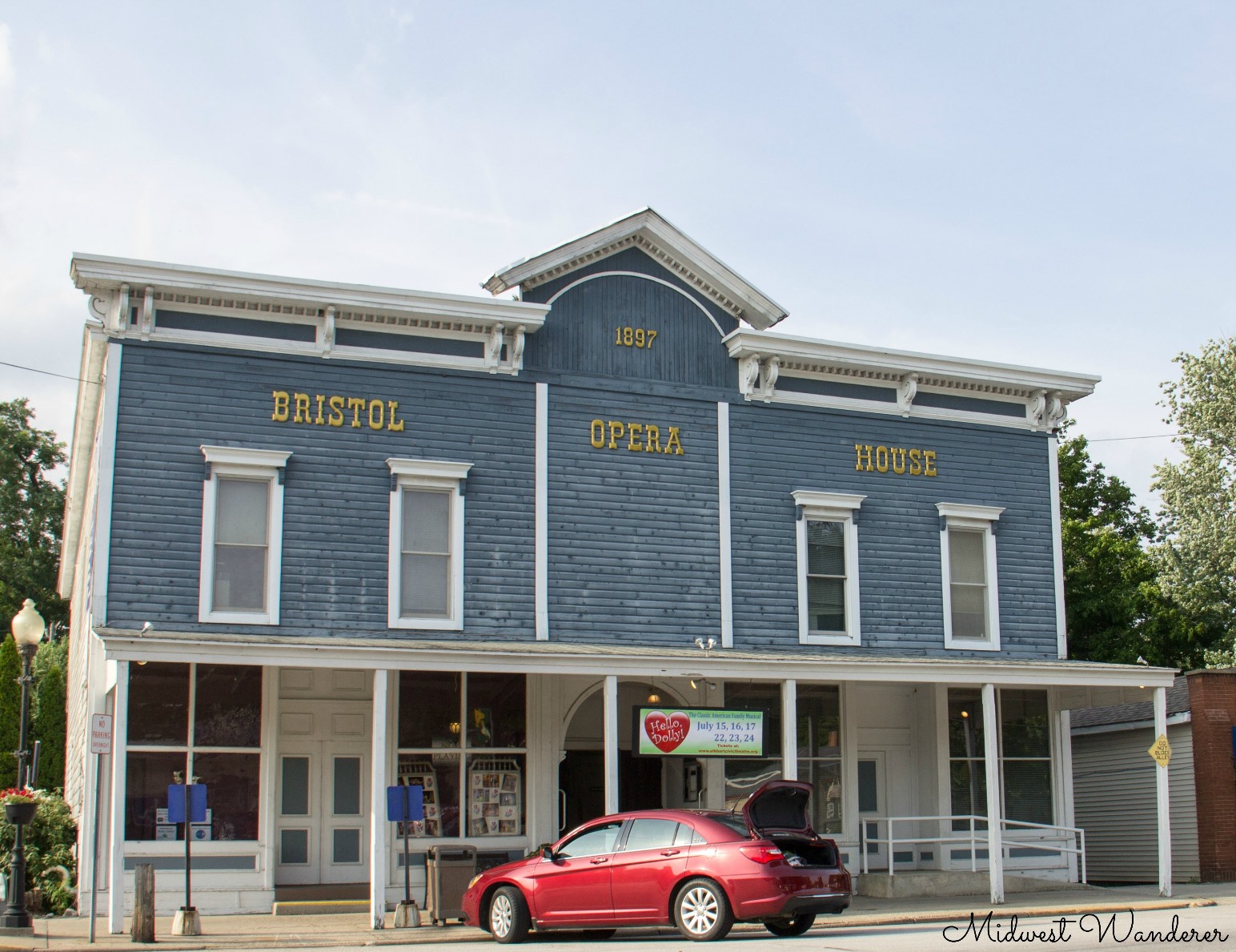 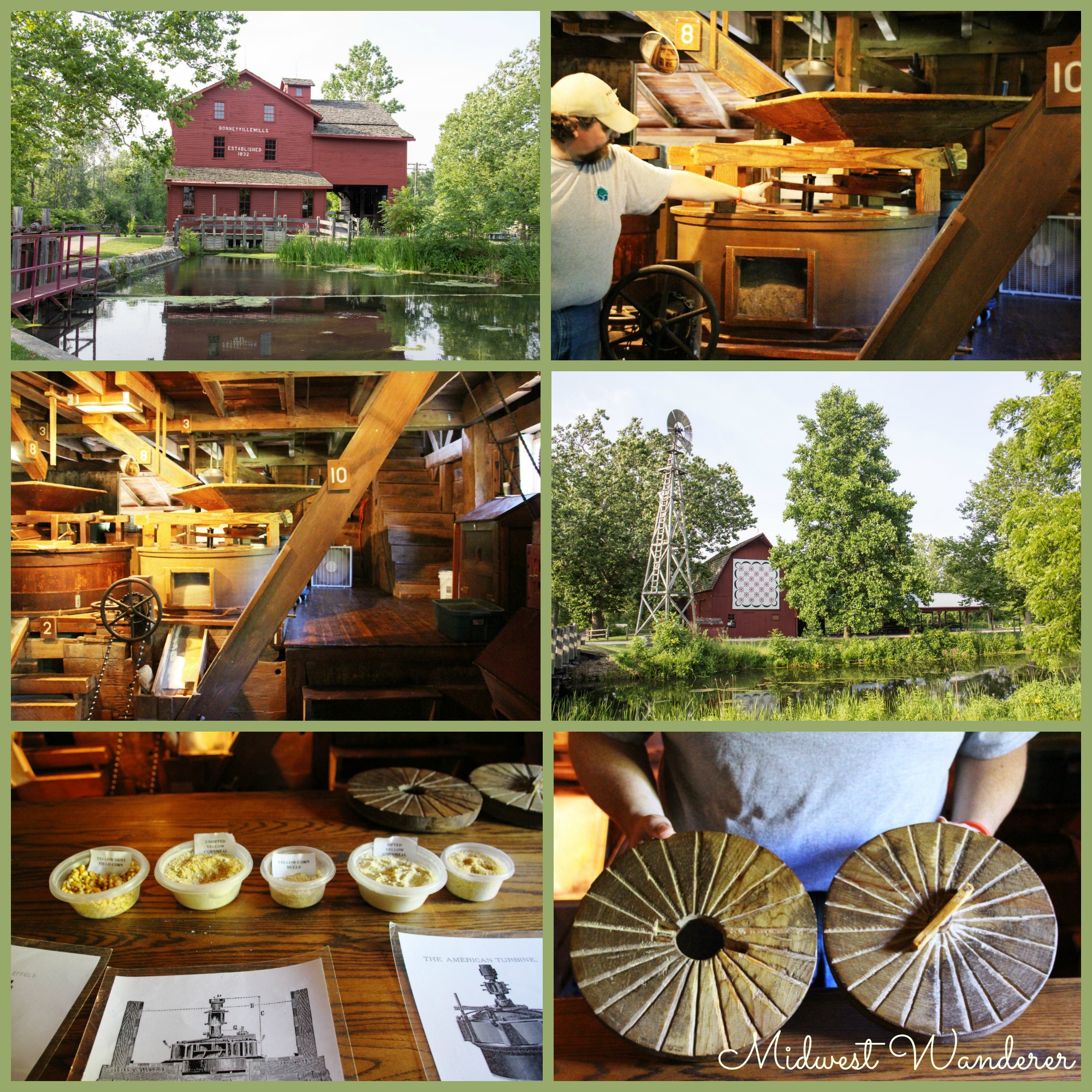 Driving on to Middlebury, we stopped at the Krider World’s Fair Garden. Vernon Krider founded Krider Nurseries in 1896. He developed the first thornless rose and gained world-wide recognition with it. Krider was invited to design a garden for Chicago’s 1933 Century of Progress International Exposition. Following the exhibition, Krider brought the garden back to Middlebury—plants, waterfalls, and all. Those are the same gardens that exist today. 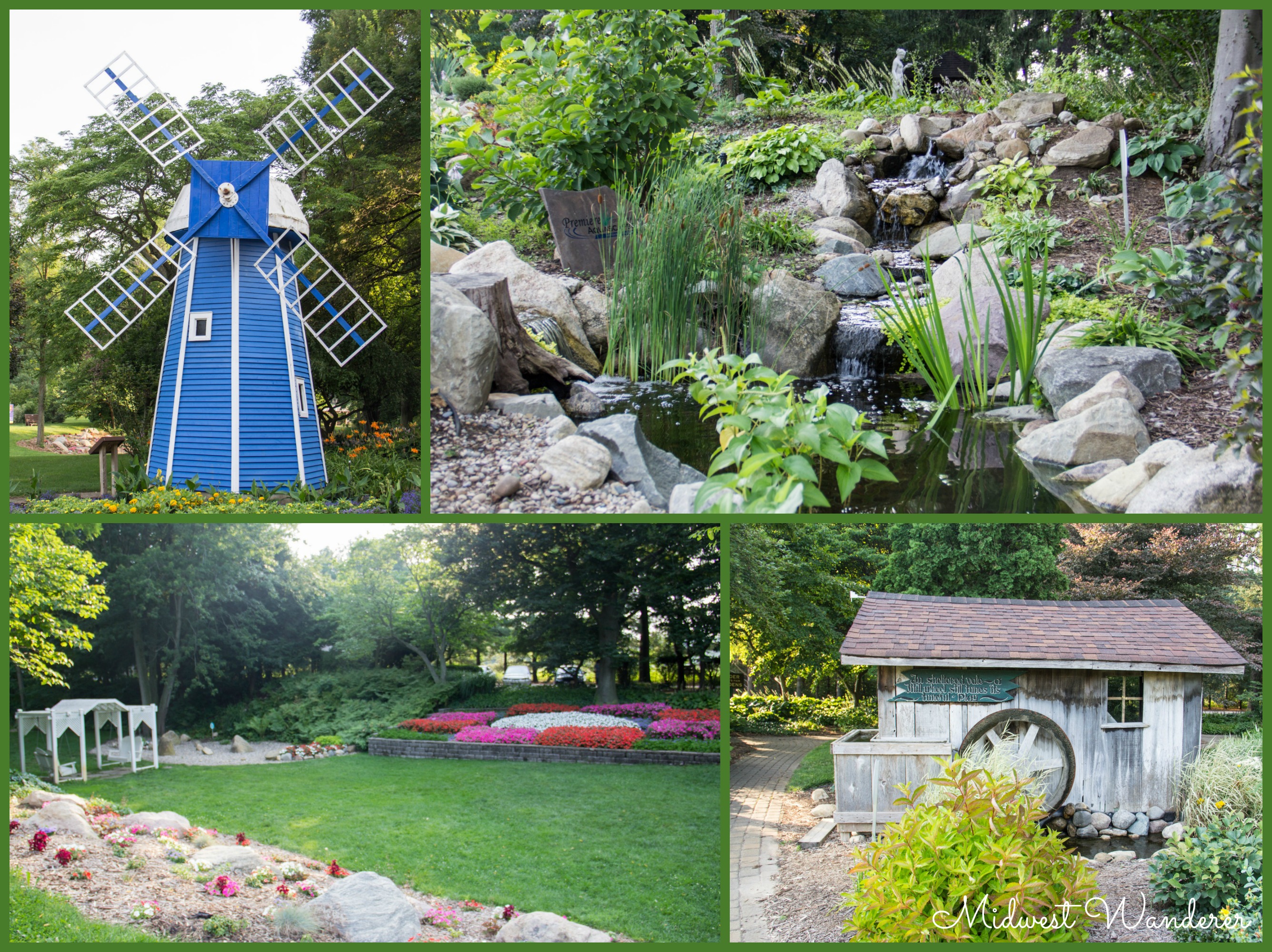 Also in Middlebury is Das Dutchman Essenhaus, a huge complex that includes shops, an inn, conference center and an Amish-style restaurant, where you can order off the menu or choose a buffet or family-style meal. Unfortunately, when we passed Das Dutchman Essenhaus, we were still full from the big meal we had at the B&B that morning.

Just outside of town, we did stop at the Deutsch Kase Haus Cheese Factory, where we tasted and stocked up on cheese. My favorite was the hickory smoked cheddar. 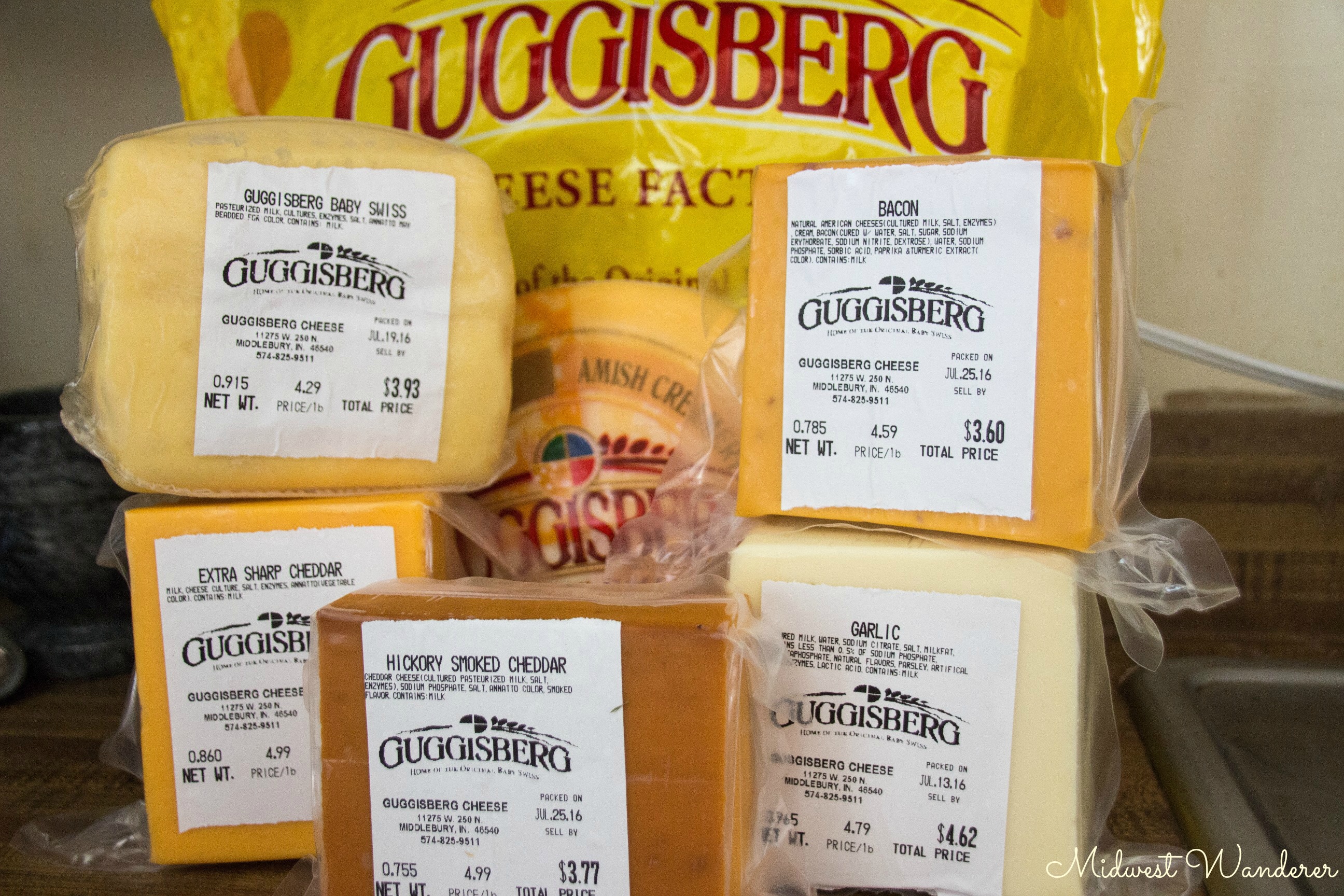 Shipshewana has only 550 residents, but over a million visitors come to town each year. Folks mainly visit for the Amish attractions—dozens of small shops, buggy tours and restaurants. Another huge attraction is the 100-acre flea market with almost 900 booths. The flea market is open every Tuesday and Wednesday. Shipshewana traffic gets very congested on the flea market days. If you’re planning to go, get there early (it opens at 8 a.m.). We made the mistake of getting there in late morning. Traffic was so heavy, we gave up, since we still had a lot to cover that day. We’ll go back again sometime to experience the flea market.

Another Shipshewana attraction is Menno-Hof, a museum that traces Amish and Mennonite history from their immigration to America from Europe, all the way through to present day. We didn’t have time to visit, but it’s definitely on the list for our next trip to the area. 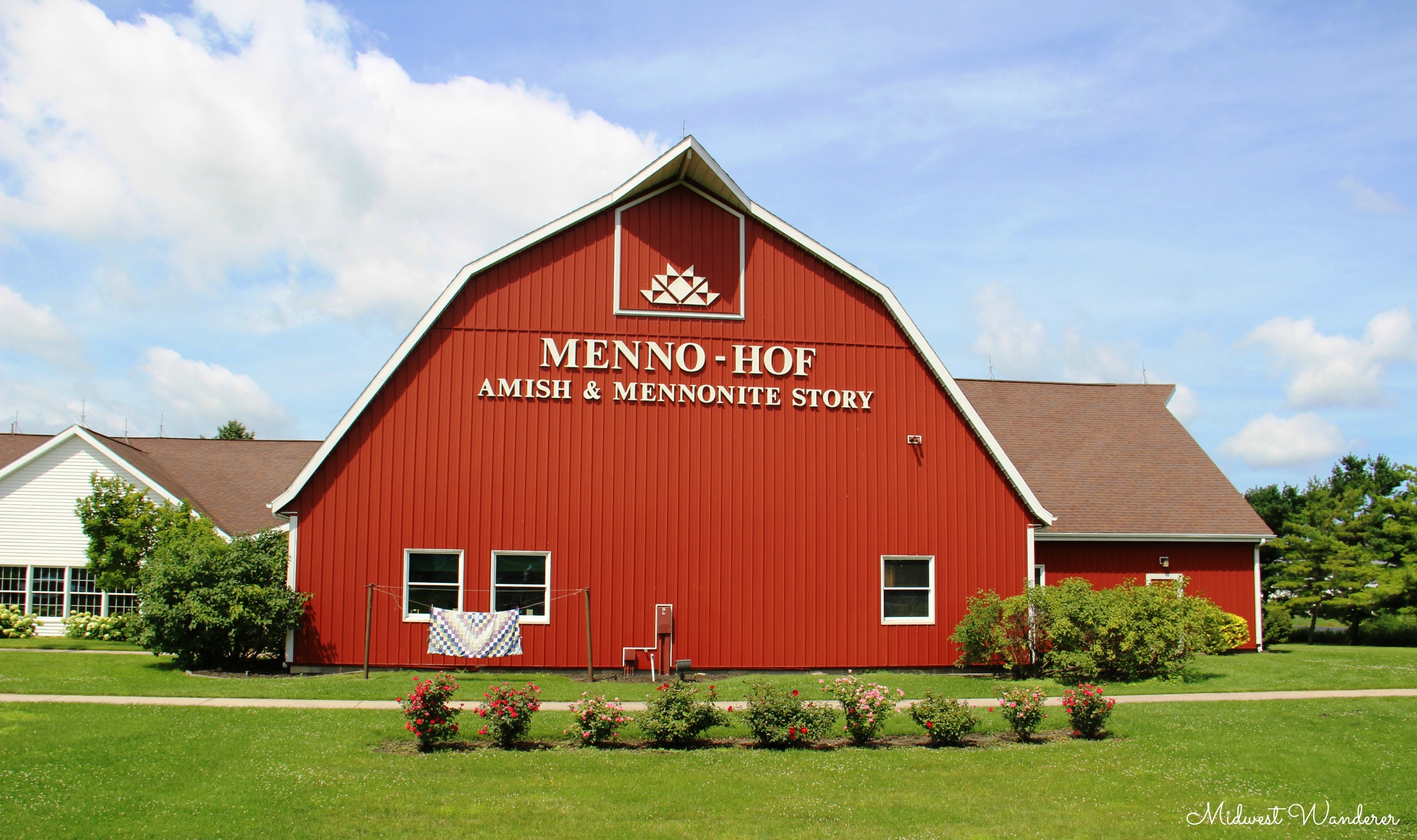 The next town on the Heritage Trail is Goshen, the Elkhart County seat. Streets that surround the town square are filled with small shops. The grand courthouse stands prominently in the square’s center. You may wonder, as we did, about the small building on the southwest corner of the square. During the Depression era, banks on three corners of the square were vulnerable to gangster robberies. The Goshen Police Department stationed sentries in the bunker to watch for gangster activity. 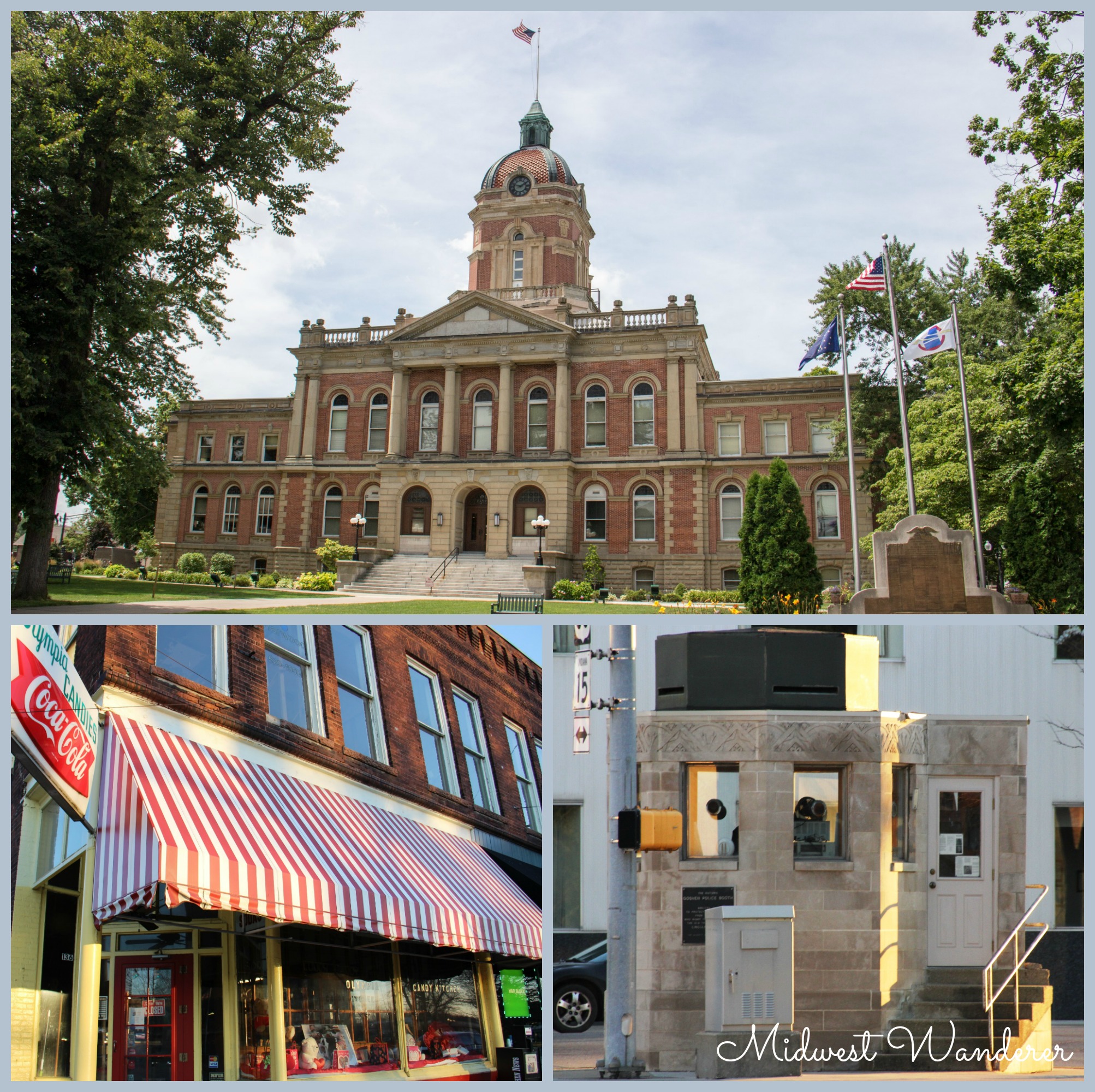 Stop at the Old Bag Factory in Goshen if time allows. The 1890 complex first housed a soap company and later, a factory that produced cloth, mesh, and paper bags. The renovated building now is home to several artisan shops. After a light lunch at the Trolley Café, we browsed the shops, which include baked goods, pottery, quilts, second-hand musical instruments, and more. 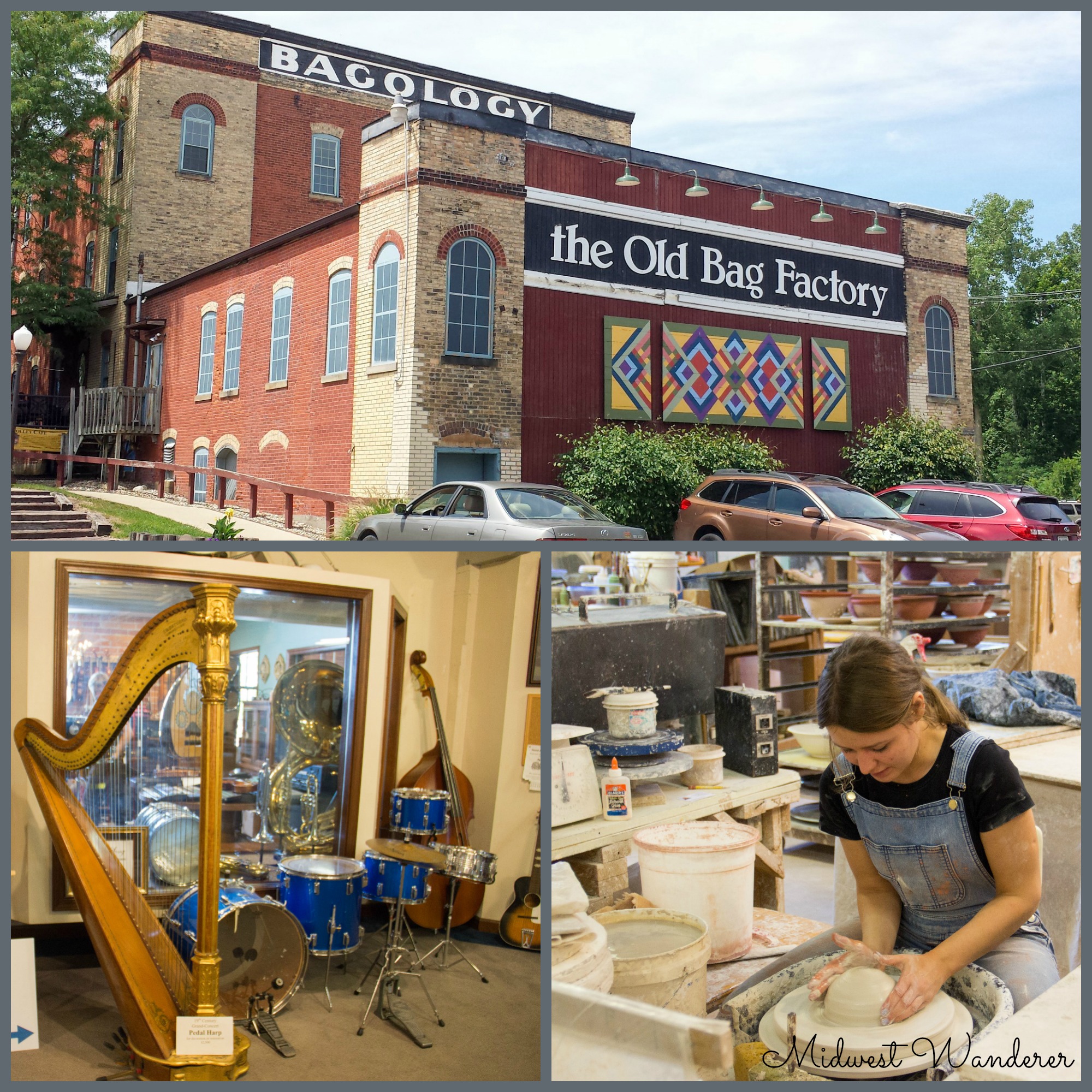 Back on the Heritage Trail, we headed to Nappanee, another Amish community.

Our first stop was the Coppes Commons. The building was originally the factory for Coppes Kitchen Cabinets, including the Dutch Kitchenet. The Dutch Kitchenet was an kitchen step-saver that included a sugar bin, flour sifter, meat scale, and food grinder, all in one. It also had a slide-out compartment for additional work space.  Today the Coppes Commons building is filled with vendors that sell Amish foods, antiques, and other goods. We were especially intrigued by Lera’s Rugs. Lera is an Amish woman who weaves rag rugs, blankets, and table runners as you watch. On the upper level of Coppes Commons is a museum with memorabilia from Coppes Kitchen Cabinets.

Next, we stopped at the Nappanee Welcome Center to check out some of the area history. Besides Amish memorabilia, you’ll find exhibits on successful cartoonists who called Nappanee home, including Bill Holman, best known for his comic strip, “Smokey Stover.” There is also a restored home inside the welcome center, furnished as it would have been in the early days. 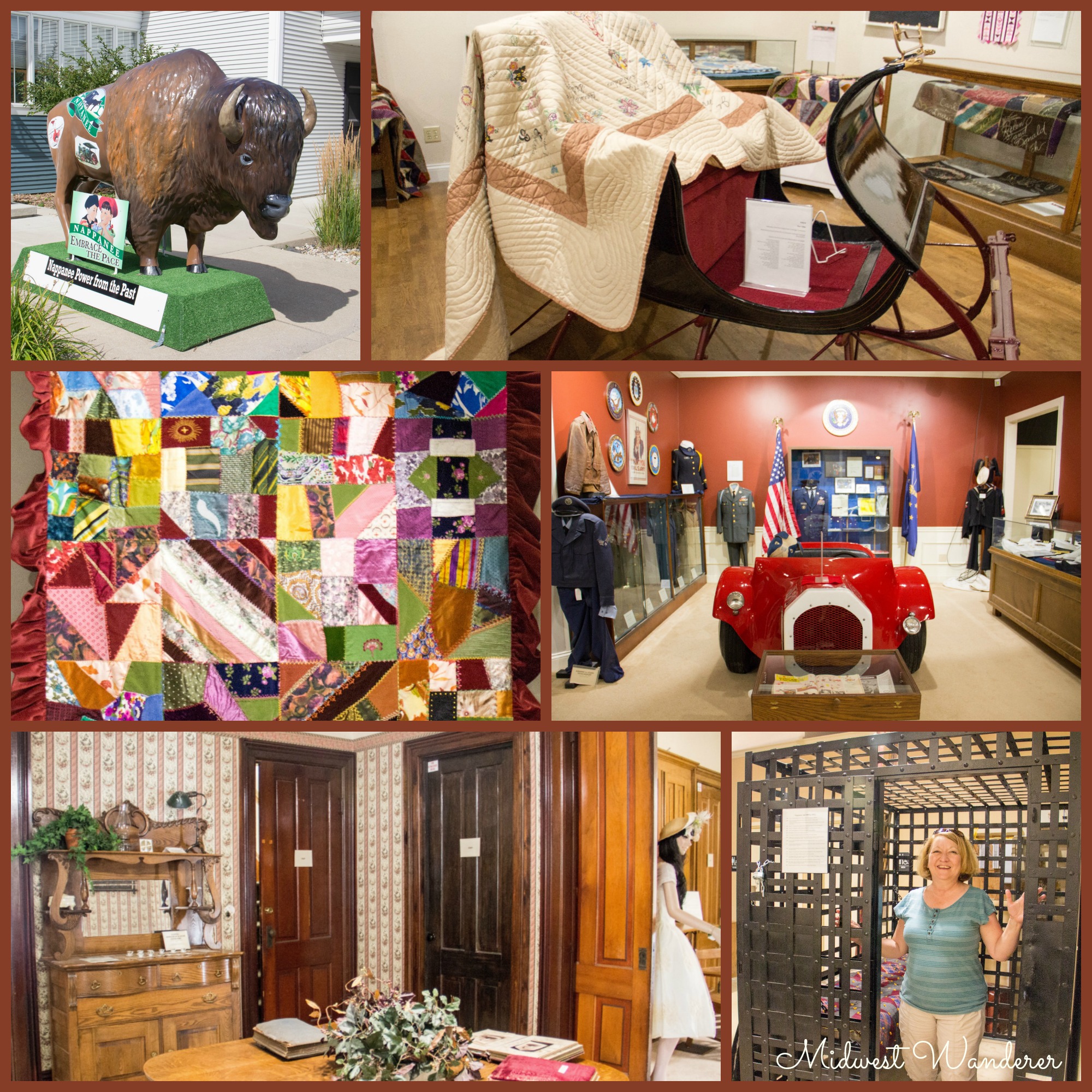 A popular Nappanee attractions is Amish Acres. We didn’t stop there on this tour, except to take a couple of photos. However, we did spend a weekend there years ago. From what we could tell, it hasn’t changed much. The attraction includes a tour of an Amish farmstead, a restaurant that serves a family-style Threshers Dinner, and the Round Barn Theater. Seasonally, you can also watch artisan demonstrations, including broom making and quilting. 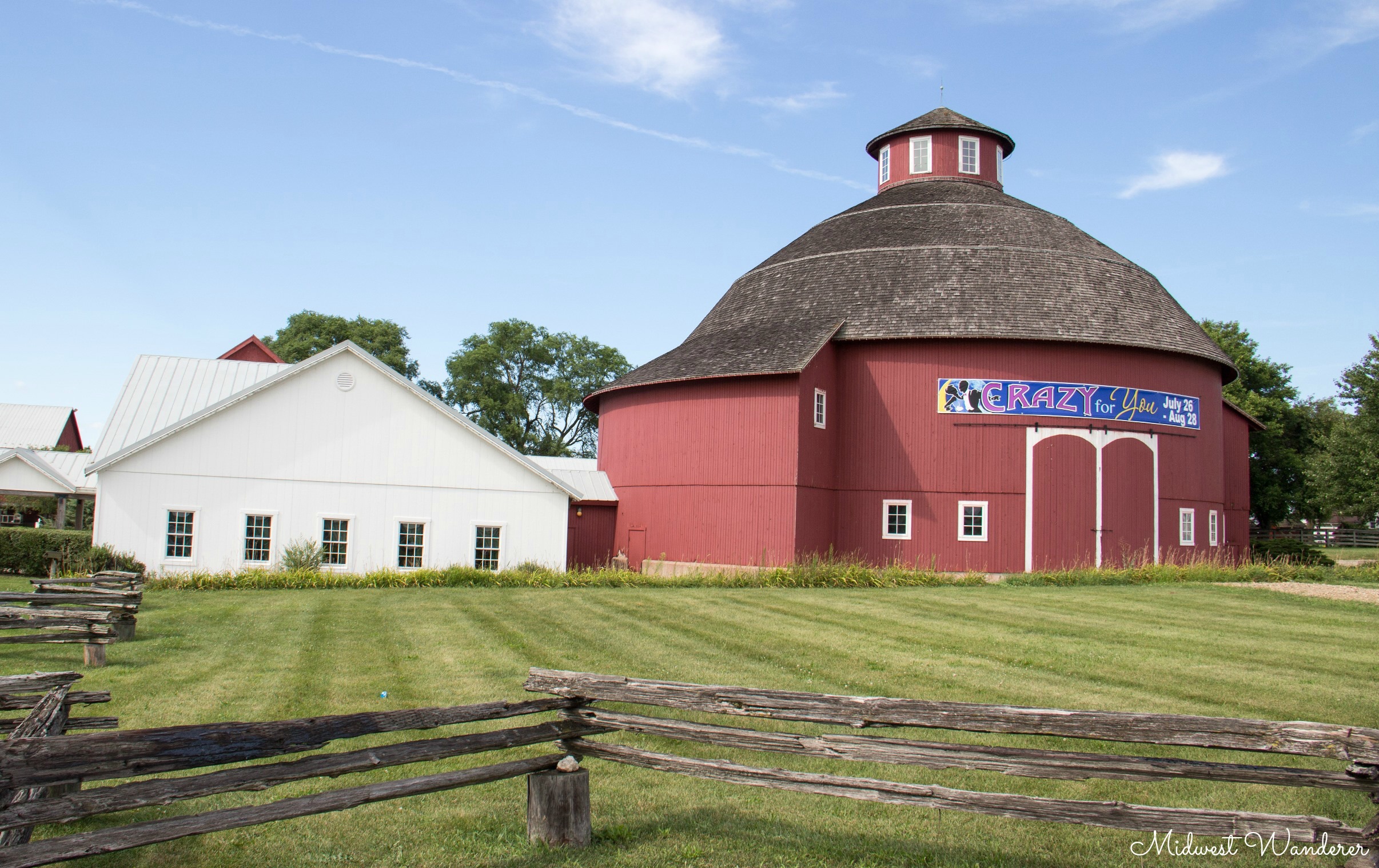 The highlight of small Wakarusa is the Wakarusa Dime Store, in business since 1907. The store specializes in candy, boasting over 450 kinds. Choices include nostalgic candies like Mary Janes and Necco Wafers. In 1969 then-owner Lou Wolfberg developed jumbo jelly beans, which were an instant hit. Jumbo jelly beans are still popular, selling at the rate of 75 tons every year.

The last—and largest—city that we explored on our Heritage Trail drive was Elkhart.

With my husband being the rail buff that he is, we had to stop at the National New York Central Railroad Museum. The museum preserves the rail heritage that was a big part of Elkhart. In fact, even today, the Norfolk Southern Railway’s Elkhart Yard is the largest railroad freight classification yard east of the Mississippi River. The museum includes renovated train cars, memorabilia, and extensive model railroad layouts. 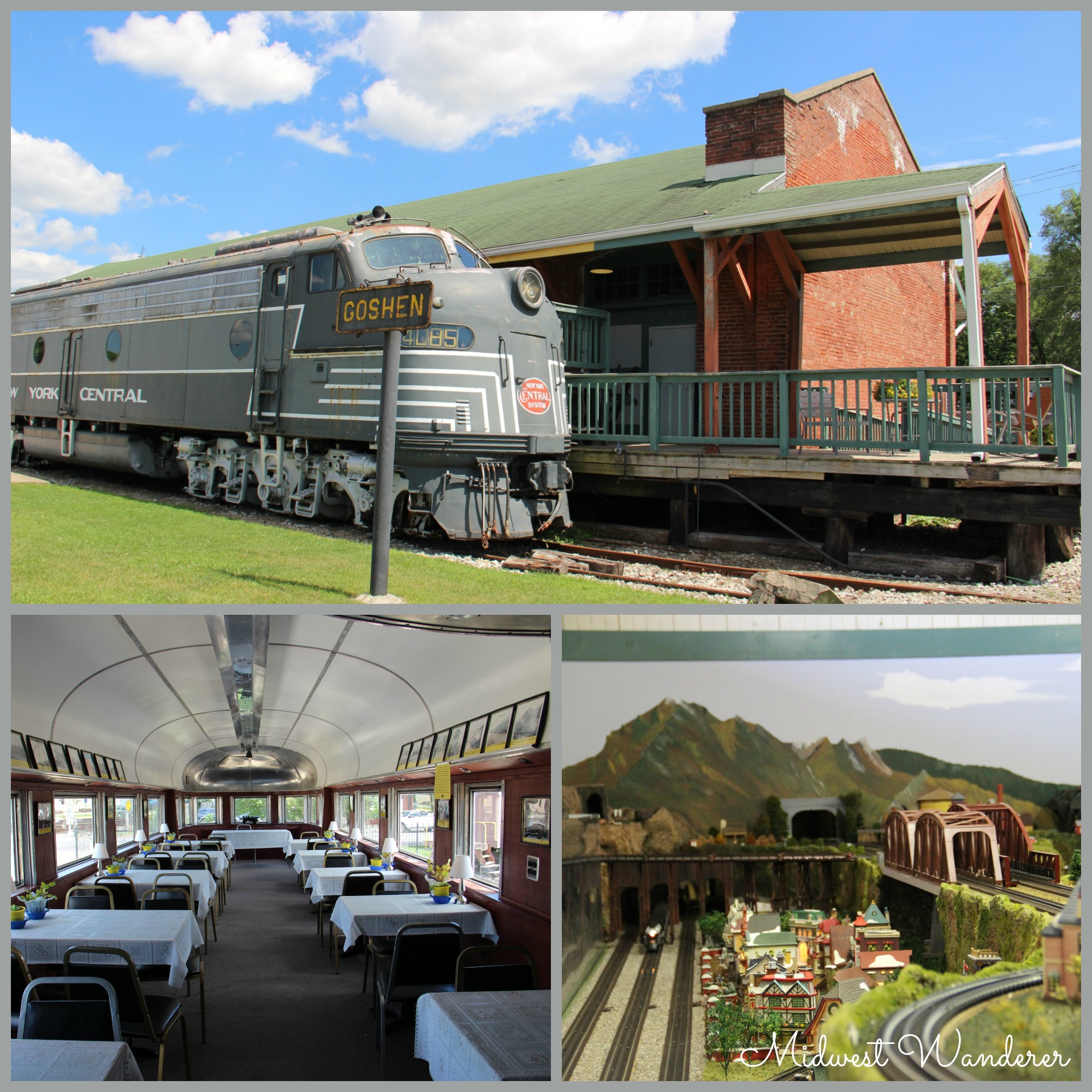 Continuing on, we spent a couple of hours exploring the 36-acre Wellfield Botanic Gardens. Wellfield is comprised of over 20 individual gardens. The English Cottage Garden, Waterfall Garden, Conversation Garden, and the Pergola Garden are just a few. Additional gardens are under construction. Water makes up over half the site, which has been beautifully integrated into the gardens. It’s hard to believe that at one time, the site, which is the same property from which the City of Elkhart pumps its drinking water, was an eyesore. Wellfield Botanic Gardens is a tremendously successful beautification project. If you enjoy gardens, it’s a must-see. 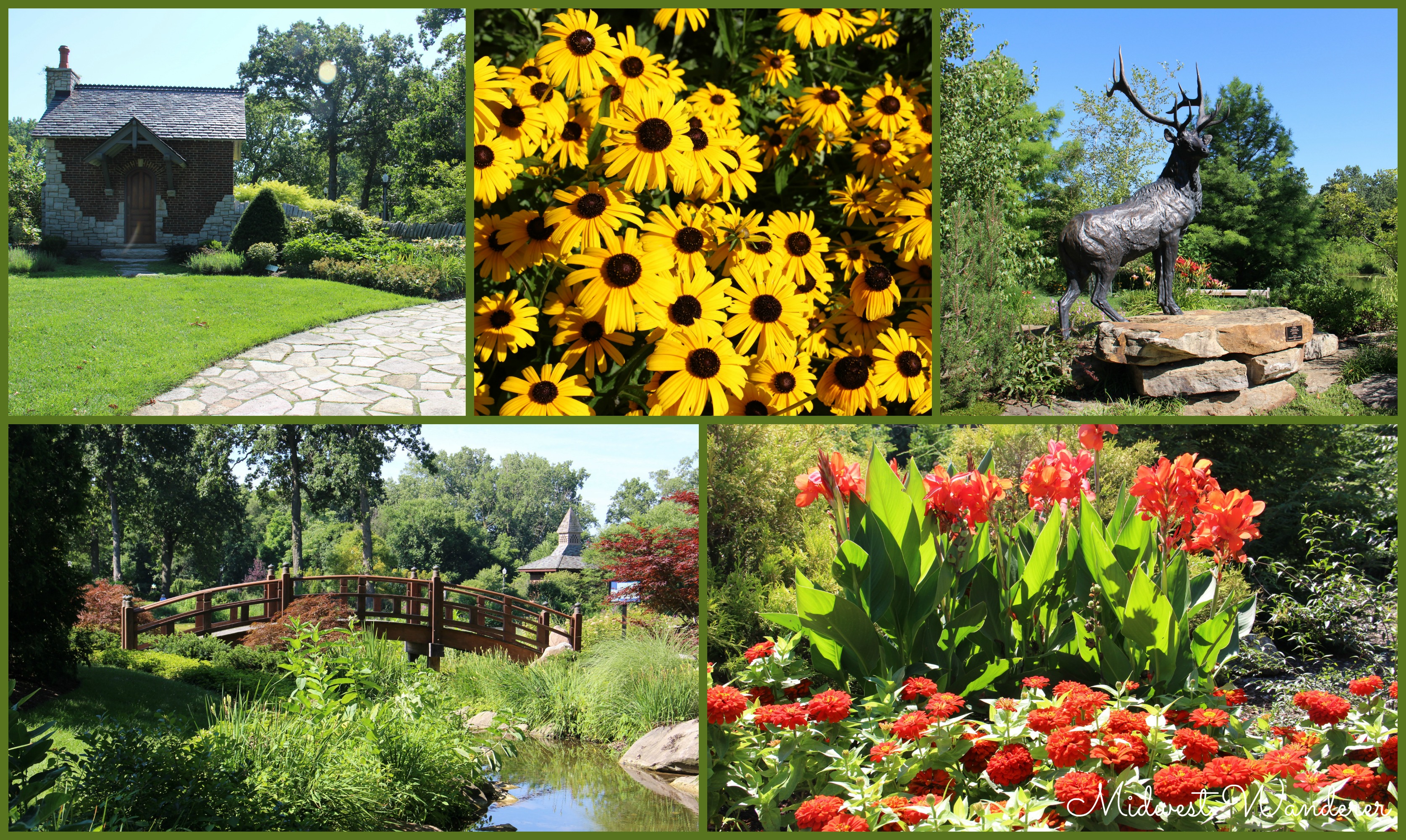 One block east of the Havilah Beardsley House is the Ruthmere Mansion. Albert Beardsley, nephew of Elkhart’s founder, had Ruthmere Mansion built in 1908. Designed by architect E. Hill Turnock, the home was named for his only child, Ruth, who died in infancy. Albert Beardsley was one of Elkhart’s most prominent businessmen, and Ruthmere, lavishly decorated with hand-card mahogany woodwork, Tiffany glass and Rodin sculptures, reflects his success.

Take time to explore some of downtown Elkhart on foot. Perhaps take a stroll along the Riverwalk. We ate dinner on the patio at McCarthy’s on the Riverwalk. From where we sat, we could see across the river to Central Park. It happened to be at the height of the Pokemon GO craze. The park was filled with young people seemingly wandering aimlessly as they played. It was fun to watch as we relaxed over our shepherd’s pie and wine. 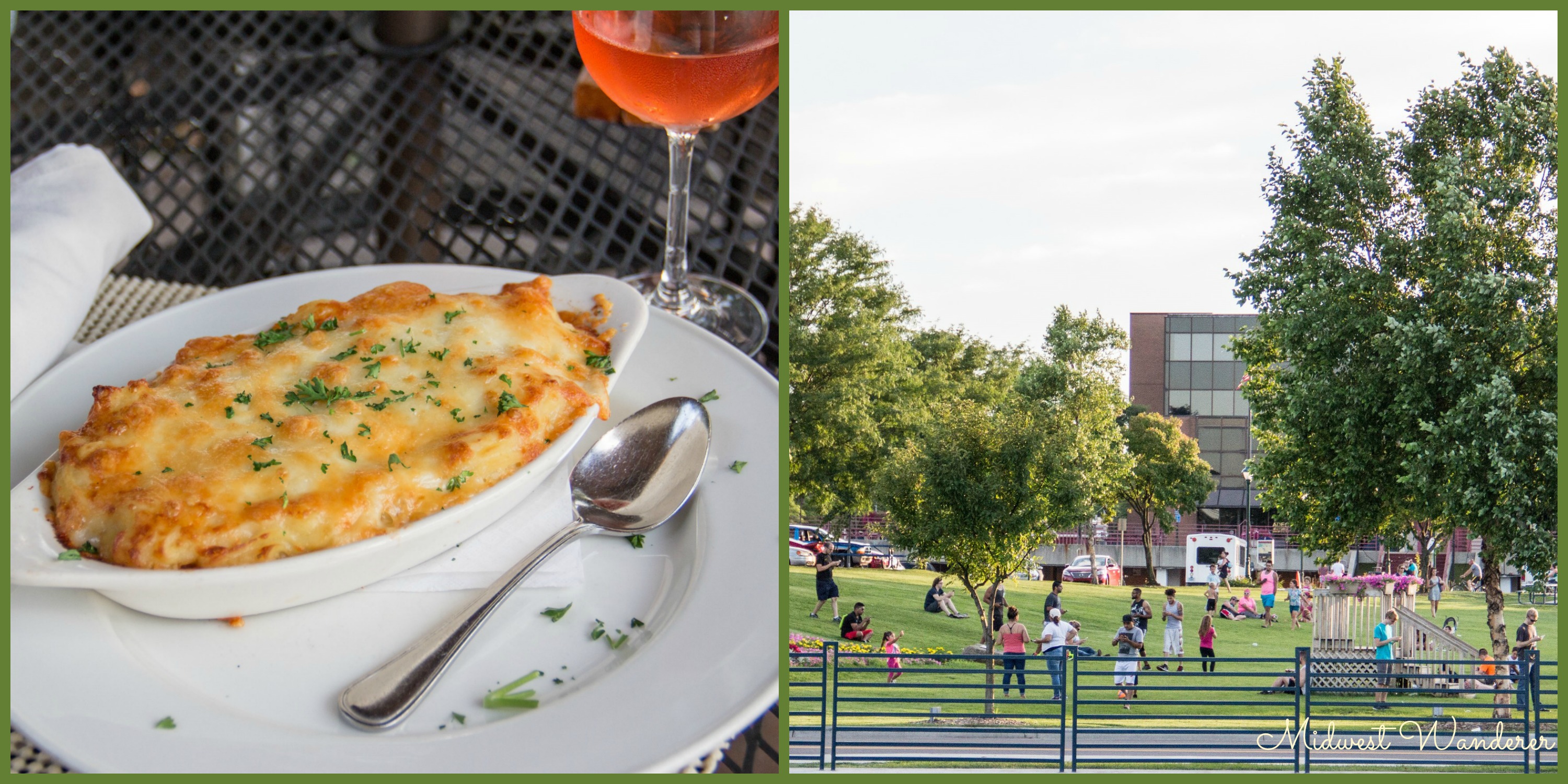 If you drive the Amish Country Heritage Trail 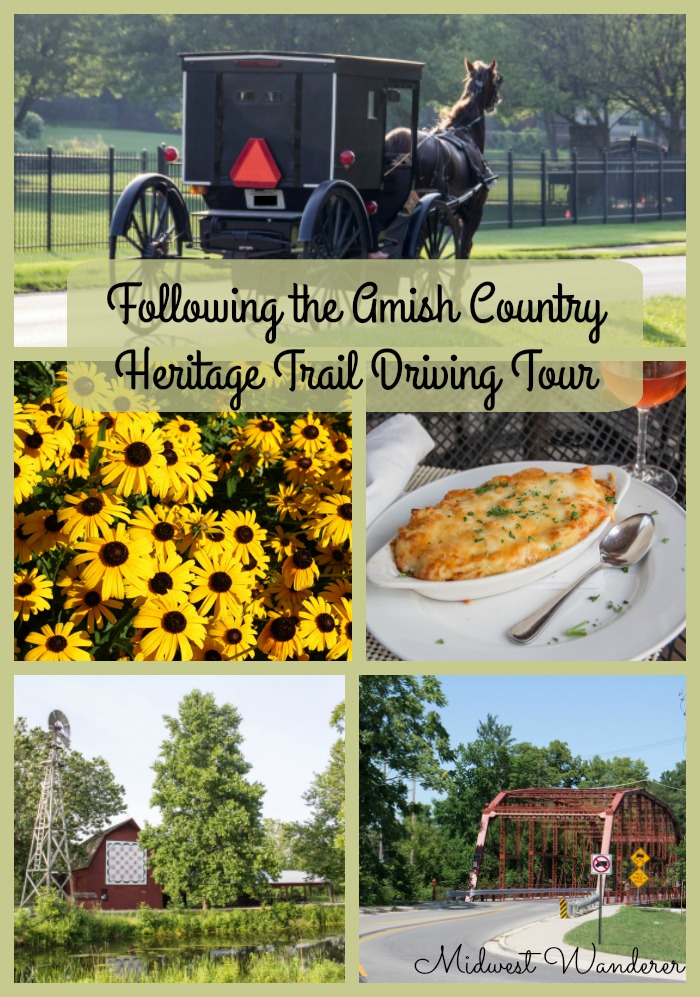 Disclosures: My visit to Elkhart County was hosted by the Elkhart County Convention and Visitors Bureau Check. Visit their website for further details on the Heritage Trail Driving Tour and other area attractions.
This article contains an affiliate link. If you book a room through the “Check rates here” link above, I will receive a small commission at no additional cost to you.

Thank you for reading Midwest Wanderer. Don’t miss a post. Enter your e-mail address below and click Subscribe, and I’ll notify you whenever I publish another post. Subscription is FREE. After subscribing, be sure to click the link when you get the e-mail asking you to confirm.   – Connie

Before this summer, I knew little about Wild Bill Hickok. Then, within just a few weeks, we visited three places within Kansas and Illinois that all shared Hickok stories—quite a coincidence. I learned several fascinating facts about him. Here are END_OF_DOCUMENT_TOKEN_TO_BE_REPLACED