Stalactites hang tight to the ceiling. Stalagmites grow from the ground up as calcite from dripping water builds up. When the formations meet in the middle they become a column. I’ve heard how cave formations build every time I take a cave tour. Yet, I never tire of touring the underground beauty of a cave. Each one is different in its own way, with unique formations,  history, and in the case of Fantastic Caverns in Springfield, Missouri, its mode of transportation. Fantastic Caverns is the only cave in the United States that doesn’t require walking or climbing stairs. Rather, you ride through in a tram pulled by a jeep. We sat back and relaxed as our guide drove us through the caverns, explaining the history of the cave, as well as its geology. 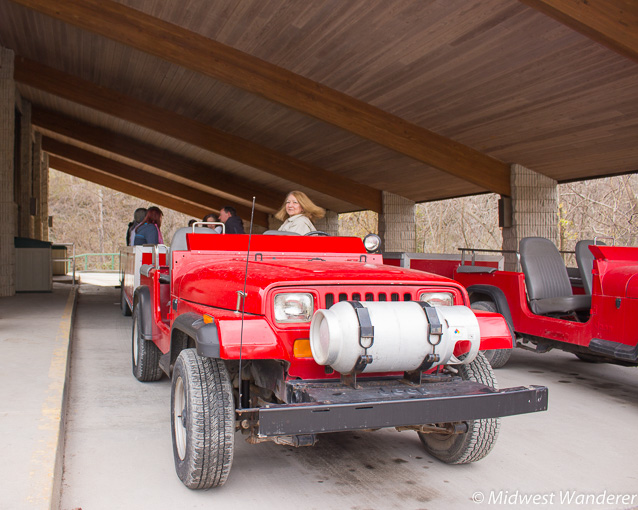 Fantastic Caverns was discovered in 1862 by farmer John Knox when his hunting dog ran into the opening. Five years later, the cave was opened to the public for exploring. The first explorers were a group of twelve women, all members of the Springfield Athletic Club. Their names are still inscribed on a cave wall. 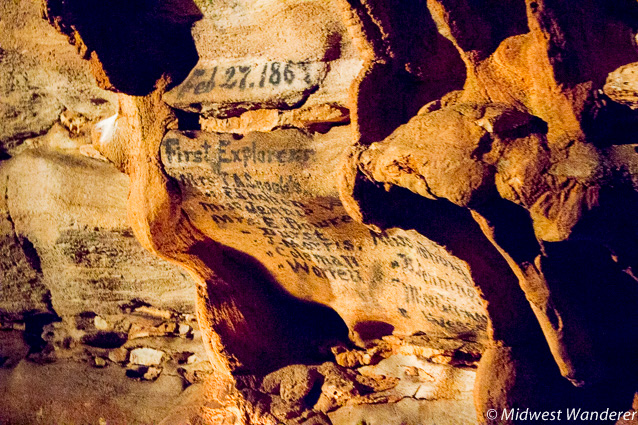 The caverns changed hands several times over the years and was used for various purposes. During Prohibition, it was a speakeasy. The local police looked the other way for some time, but shut it down when a shooting occurred. For a few years after that it was used as a secret meeting place for a local vigilante group. During the Depression the owner grew mushrooms in the cave and sold them at the city center to supplement his income.

In the 1950s the cave was named Fantastic Caverns and became a popular Route 66 attraction. New owners began giving jeep tours in the 1960s. The caverns also became a country music entertainment venue, home to the nationally broadcast Farmarama show that featured stars like Buck Owens and Ray Price.

The Campbell family, who had managed the property since 1966, bought it in 1992. By then the current visitor center was built, and jeeps and trams were put into service. Fantastic Caverns remains a small, family-owned business today.

The earliest visitors explored by candlelight, but by 1880, the lighting was electrified. Lights were powered by a steam engine before switching to an AC Delco battery system. An indirect lighting system was installed in the 1970s, which shows the cave off better.

Along the trail our guide talked about the cave creatures, including the Eastern Pipistrelle bat, the smallest bat in the United States. Most of the other creatures, including blind cave fish, blind cave salamander and blind cave crayfish live in the water than runs a level lower than the tram trail. These creatures originally lived outdoors and weren’t blind. After two generations, their bodies adapt. A thin layer of skin covers the eye sockets, and they lose pigmentation.

The tour highlight, of course, is the beautiful formations. Our guide pointed out the various formation types and explained how they develop. Darker formations are dormant, no new water dripping on them. Formations still growing are crystal white. The tour finale was huge, beautiful calcite sprials. 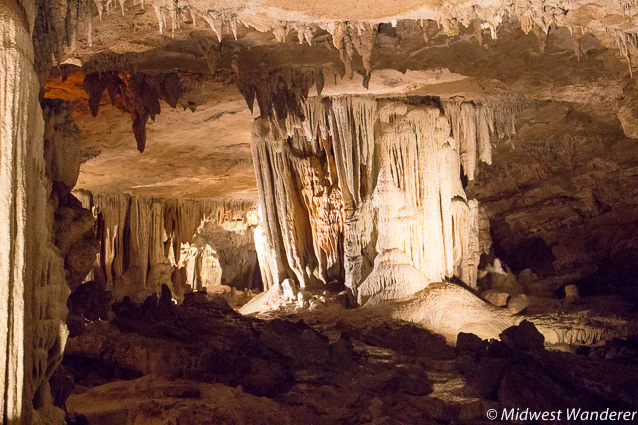 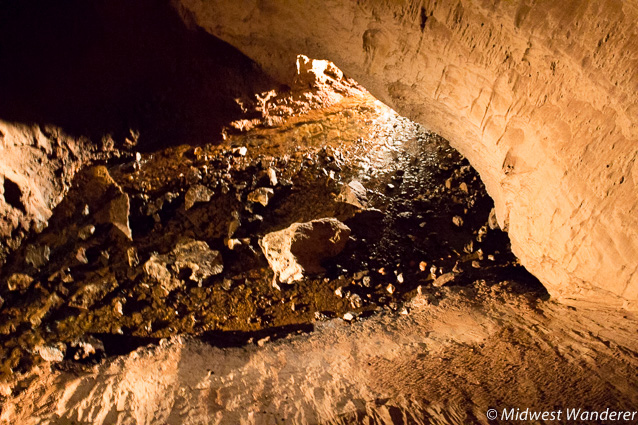 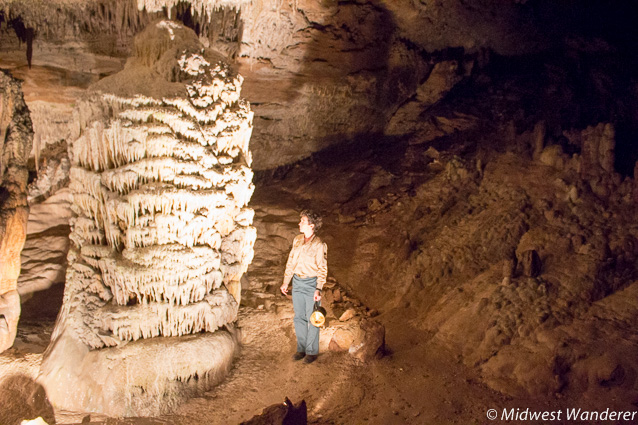 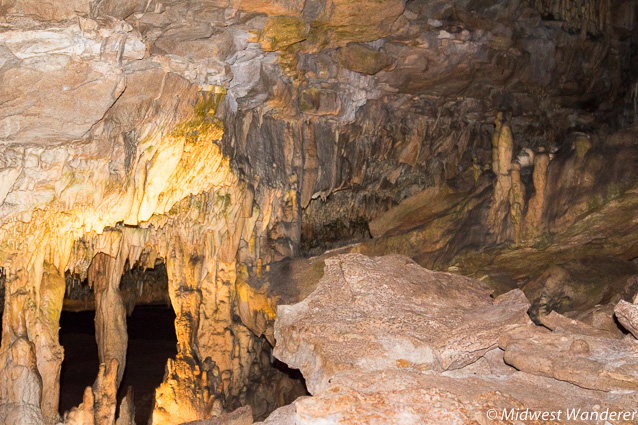 Following our tour, we hiked the Canyon Trail down to Indian Spring, where the water that emerges from the cave. The spring only flows during wet weather months, and we visited in March, when there had been rain and snow had recently melted. 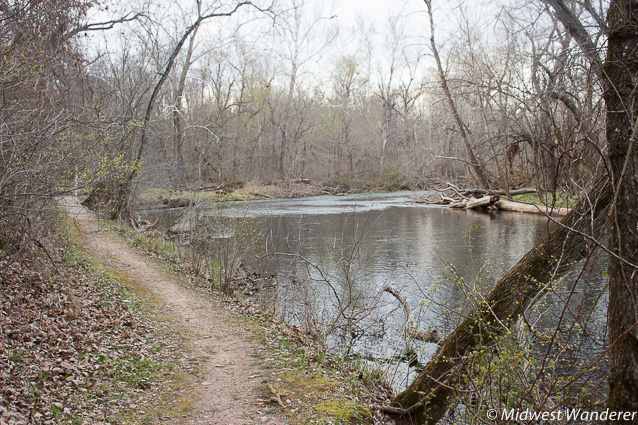 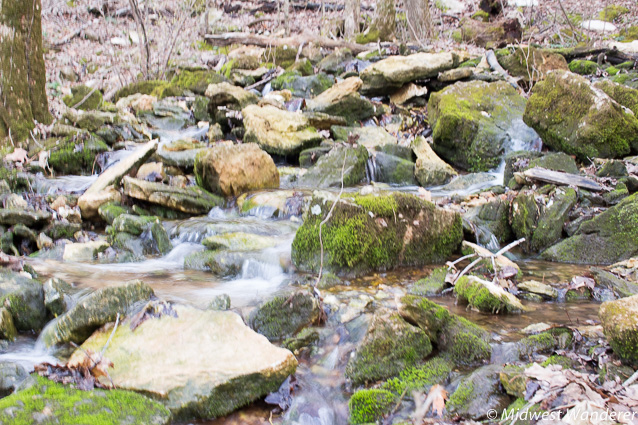 Fantastic Caverns, located at 4872 North Farm Road 125 in Springfield, Missouri, is open daily except Thanksgiving Day, Christmas Eve and Christmas Day. Check the web site for hours and admission rates. The temperature in the cave is always around 60 degrees, so dress appropriately.

Disclosure: Our visit to Fantastic Caverns was hosted by the Springfield Missouri Convention and Visitors Bureau and Fantastic Caverns, but any opinions expressed in this post are my own. Photos by Skip Reed.

Before this summer, I knew little about Wild Bill Hickok. Then, within just a few weeks, we visited three places within Kansas and Illinois that all shared Hickok stories—quite a coincidence. I learned several fascinating facts about him. Here are END_OF_DOCUMENT_TOKEN_TO_BE_REPLACED